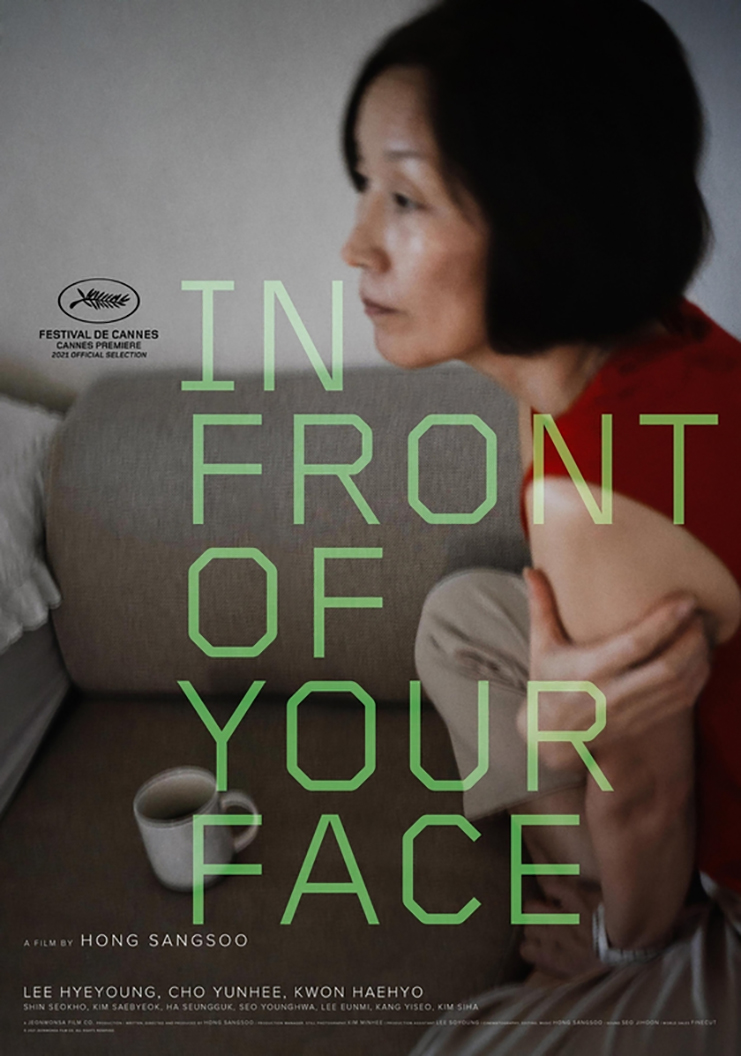 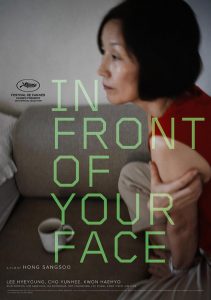 A few quiet minutes into the South Korean director’s latest, In Front of Your Face, the film’s protagonist opens with a meditation: “Everything I see before me is grace. There is no tomorrow. No yesterday, no tomorrow. But this moment right now is paradise. It can be paradise.” Her face flickers a slight wince, and it is not clear if she believes these words or is trying to will them true.

As the story unfolds, we find out that Sang-ok (Lee Hyeyoung) is back in Seoul after a long absence in the States. At the height of her celebrity as a famous Korean actress, she had ditched everything to follow a man to Washington D.C. When the romance doesn’t last, Sang-ok migrates to Seattle and runs a barely-surviving liquor store instead of returning to Korea and her successful career. The explanation behind these post-break up choices are never explicitly discussed but it’s assumed that for Sang-ok to return now and face the people she’s left behind, there must be a good reason. And we learn before too long that a well-known director (Kwon Hae-hyo) wants to meet with her about a possible new film project.

Acclaimed South Korean writer-director Hong Sang-soo is known for simple single-plot stories with few characters. It allows him to release work at a relatively quick pace — one to three films a year — with the majority clocking in at 90 minutes or less. The 85-minute In Front of Your Face is his 26th feature, and dips into territories he often explores: familial relationships, relationships with filmmakers, infidelity. He also employs his distinct style of telling stories through incidental moments, casual conversations, and restrained looks that hint at deeper emotional terrain.

During her visit, Sang-ok keeps her estranged sister (Jo Yoon-hee) at arm’s distance, only mildly hinting at the past and the present. We suspect there is a secret but she volunteers little to her sister or to the viewer. She is more curious about dropping by her childhood home, which now serves as a quaint neighborhood shop, and more interested in ruminating on memories she doesn’t share with the audience.

But this film also has its divergences from “typical Hong Sang-soo.” Sang-ok’s circumstances are graver than those of his other film protagonists. Could this be why he infuses the film with a more vibrant and joyful use of color than he typically uses? Does he mean to ask her — and us — to forgive him for the journey he is putting her on?

It is not until the second half of the film, when Sang-ok is deep into a long evening with food and drink with the director that we come to understand why she is so compelled by his offer to make a new film and why she has been so reserved with her sister. By the time we arrive at this point, the revelation is more cathartic than it is surprising — which makes the brief final act and its brilliant use of a deep-throated laugh feel like the grace and paradise she is reaching for.

In Front of Your Face premiered at the Premieres section of the 2021 Cannes Film Festival. It will be showing in-person at Northwest Film Forum, July 8-10 and July 13-17. It is directed by Hong Sang-soo and stars Hyeyoung Lee, Jo Yoon-hee, and Kwon Hae-hyo.