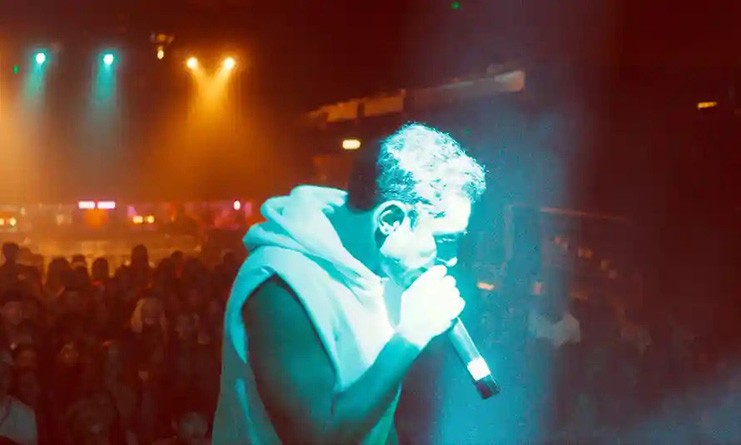 On the verge of his breakout tour, a British Pakistani rapper, Zed (who is played by Riz Ahmed, an actor and rapper), returns to his British family after two years in New York City. While there, he becomes ill with a muscular degenerative disease that rapidly affects his mobility. As he struggles with his quasi-paralysis, the film Mogul Mowgli takes us on a journey into his life story, his challenges with his family (especially his father), migration, racism, cultural expectations and family history.

The narrative blurs the boundaries between his real experiences and a hallucinatory journey into his family’s past with the Partition of India in 1947. The film is not linear and there are rapid cuts that take the viewer on a dizzying journey through performances, hallucinations, scenes from family conflict, partition history all of which point to the psychic dislocation of the Muslim diasporic subject.

Interspersed through the film are powerful lyrics by Riz Ahmed, rich with allusion, that speak to the agony of finding one’s place within family, community, race and nation. The title, drawn from one of Ahmed’s songs, signals both the royal heritage (Mogul) that he can be proud of and Kipling’s orientalist depiction of the South Asian male (Mowgli) —popularized across the globe including through a Disney film, Jungle Book—as always an uncivilized child living in the jungle.

Several motifs run through Ahmed’s lyrics that bring the different strands together. He pairs the rose and the poppy in one of his songs noting that the rose was the Mogul symbol of love but the poppy is now associated with Muslims. The poppy is a weed, he says, and often uprooted. This contrast between the elegant rose that is cultivated with care and the poppy that is discarded speaks to the Mughal Mowgli binary. The poppy also recalls for us the production of opiates after the invasion of Aghanistan, which leads to the spread of the stereotype of the South Asian Muslim as a terrorist and/or drug dealer.

Another powerful motif is the repeated phrase, “Toba Tek Singh.” Viewers familiar with partition literature will recognize Ahmed’s reference to Saadat Hasan Manto’s brilliant short story of that name in which the protagonist (also named Toba Tek Singh) is maddened by the violence, and through his ravings speaks the truth of the profound political insanity that led to division of the sub-continent. By evoking Manto constantly, Ahmed underscores the history of the British Muslim community as one beginning in 1947 and continuing to the present day as the West promotes Islamophobia through its war on terror.

Still another theme is that of what we pass on from one generation to another. Zed is advised by his doctor to freeze his sperm before he embarks on chemotherapy for his illness as the treatment renders patients infertile. Zed’s conversation with his ex-girlfriend as he sits in the privacy of the fertility clinic about what will happen to his sperm should he die raises not just the specter of impending death but a larger question of what genetics means. Zed’s father (Alyy Khan) may have experienced a milder version of this illness in his youth and wonders if he passed it on to his son. As father and son work through their difficult relationship—different expectations, guilt, compassion, and love—permeate their conversations. These motifs make us wonder if our belonging is rooted in our bloodlines, a particular geographic space, or in our memories and stories.

The performances of Riz Ahmed, Alyy Khan, Anjana Vassan, Aiysha Hart and Sudha Bhuchar are nuanced and powerful. Occasionally, the father-son interaction is reminiscent of sentimental Bollywood film, but that is less of a cliché and more of a gesture toward the complex cultural heritage of the British Muslim diasporic subject. This film is not your typical diaspora film about generational differences and displacement of immigrant communities, but it takes those familiar narratives and reinvents them.

This film opens on September 17 at Grand Illusion Cinema, Seattle.