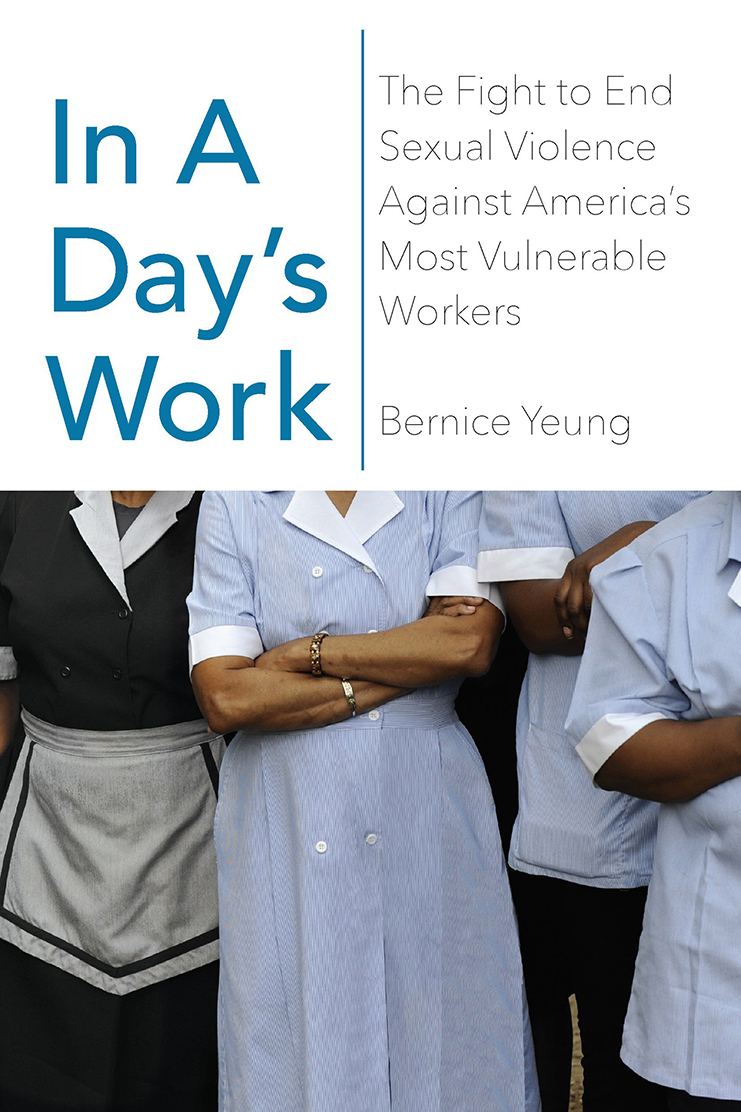 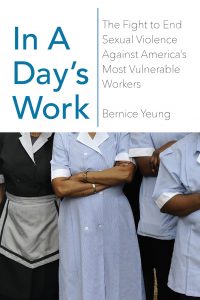 Bernice Yeung’s 2018 book In A Day’s Work, is an extremely readable yet detailed work that documents workplace sexual harassment and assault among janitorial, caregiving and agricultural workers in the United States. Yeung, a reporter for ProPublica from Berkeley, California, also demonstrates the ways in which these workers are fighting back through legal mechanisms with help from both governmental and non-governmental organizations.

Importantly, she also highlights major gaps in labor laws that deny rights to janitorial, caregiving and agricultural workers and how some local and state governments are working to fill these gaps. The book also focuses on how stereotypes create impediments to justice and encouraging attempts to change the way many in these industries view and react to sexual assault.

Yeung’s book is essential reading for anyone working in janitorial, caregiving or agricultural work, or is an undocumented immigrant or advocate for immigrant rights who is unsure about the rights and recourse to justice for sexual harassment and assault victims. Yeung details several non-governmental advocacy groups that can serve as examples for areas in the United States that currently lack necessary advocacy groups for janitors, caregivers, and farm workers. For example, Yeung describes how Vicky Marquez, a member of a southern California advocacy group for janitors, Maintenance Cooperation Trust Fund (MCTF), goes from site to site to build personal relationships with janitorial staff.

Given the dispersed nature and late hours of janitorial work, it is often quite isolating and can leave workers exposed to predatory supervisors. Many workers also lack English language fluency and immigration documents which makes them further vulnerable.

Through repeated site visits, Marquez and MCTF both inform workers of their basic rights and build trust with workers. Through this hard-won trust, Marquez and MCTF are able to assist workers to fight back against workplace sexual assault. In one specific instance, MCTF assisted a survivor of sexual assault bring a sexual harassment lawsuit against a janitorial company which led to a financial settlement and the firing of the supervisor.

In an interview with the International Examiner, Yeung said that despite the above example and other non-governmental advocacy described in the book, there are many areas of the United States that lack the infrastructure and organizations to advocate for farm workers, janitors and caregivers. Even though there are many parts of the country that lack the necessary organizations to assist workers, the existing pockets of advocacy groups “can be seen as examples, then adapted to different industries and localities.”

“It is amazing that there are people, people are still trying in a way that has had some impact,” Yeung said. “Even if it’s these isolated pockets, that is where you start…. Hopefully over time, as people talk to each other…they can make it work within their own context.”

This, perhaps, is the most important contribution Yeung’s book makes. By detailing the efforts of other successful advocacy groups, it helps spread the model of how to fight back in an institutionalized, systematic manner.

Yeung also discusses how pockets of legal reform can serve as models for other localities and states. The book describes laws that local and state governments have passed mainly in California, Oregon and Washington state that strengthen workers’ legal recourse to fight and prevent workplace harassment and assault. She says that “it is fair to say that […] California, Oregon and Washington have more employee friendly laws in place.” Given this more employee-friendly culture, once nonprofits leaders, union leaders and politicians “become aware of this issue [of sexual harassment], they felt like they really wanted to push forward. As a result, we have seen legislation on the West Coast.”

Despite progress legally and in the non-governmental sphere, Yeung highlights the cultural barriers to fighting back against and preventing sexual assault and harassment. Yeung discusses how there is a prevailing “rape myth” in society that assumes rape victims go to the ER bruised and battered shortly after a rape. Many sexual assault victims who actually do come forward to seek justice, however, do so well after the actual events.

Moreover Yeung, who skillfully uses expert opinions throughout her book, cites research that shows assault victims have trouble remembering the sequence of events and answering questions about a traumatic event. As such, victims “may appear suspicious. Taken out of context, the fitful memories of traumatized people can be devastating for their legal cases.” Yeung writes that Oregon prosecuting attorney Joshua Marquis finds that “juries tend to believe that false rape reports are frequent.”

Even though these cultural barriers are strong, Yeung’s work shows how some agricultural companies are providing training for their workers in the workers’ native languages to raise awareness about what exactly is sexual harassment and assault (in other words, debunking the “rape myth”). She details how some training participants — both male and female — show an open mind about how to help prevent sexual harassment and assault. She describes follow up and enforcement measures by companies and non-profit organizations to make sure trainings are not simply one and done. Like the above described organizations and legislation, these positive pockets can hopefully serve as models for others.

Yeung’s book is an honest look at the significant challenges but also the promising steps forward for immigrant rights and those working in the janitorial, caregiving and agricultural fields. The bulk of Yeung’s research for In a Day’s Work, however, was conducted during the Obama presidency. Given the aggressive immigration enforcement and deportation policies under Trump, the Examiner asked Yeung if she had a message for undocumented immigrants who might hesitate to seek justice for fear of possible negative consequences. Yeung first pointed out that President Obama did deport very large numbers of immigrants before she replied, “For those who did come forward [to seek justice…], I personally saw some of them transform in a positive way as a result of participating in the legal process […] That in filing a lawsuit or going to law enforcement or fighting for legislation, they came to own their own power as an individual and as a worker who could expect dignified working conditions. Making a demand, whether it’s filing a lawsuit or going to your boss and saying these conditions need to improve, can have a really positive impact in ways you don’t even anticipate.”