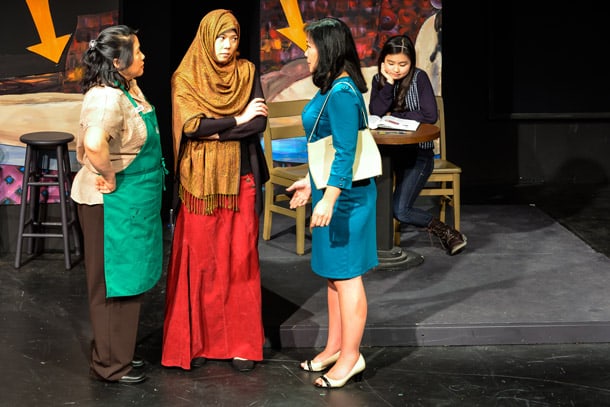 An award-winning play by Mia McCullough, Impenetrable has risen to distinction for pushing the envelope and confronting female body image past its many layers of contention, as told from multiple vantage points, through many rich voices.

As part of their “Celebrate Women” campaign, Sex in Seattle (SIS) Productions brought this production to the next level, delivering Impenetrable’s West Coast premiere with a successful, nearly month-long run concluding May 3. Impenetrable, as an excellent, ground-breaking script, was enhanced by the thoughtful execution and leadership of director Charles Waxberg and producers Rachel Rene Araucto, Kathy Hsieh, Lisa Marie Nakamura, Miko Premo, Melissa Slaughter and Roger Tang. Its talented cast followed suit and reflected a more racially and culturally diverse makeup than many of they play’s previous iterations, providing a unique dynamic and stage chemistry that could echo many cultural dynamics in Seattle.

Inspired by a real controversy that arose in Glenview, Illinois, the unfolding of Impenetrable (and a whole community) begins with a 10-foot by 36-foot billboard. It unhinges the calm suburban center of an upper middle-class town, exposes the town’s deepest truths, and unravels each character’s vulnerabilities and contradictions. This sparks boycotts and reunions, and shifts characters into new relational alignments with themselves and others. The billboard acts as a sort of alternative deus ex machina: a wake-up call to shake each town player to his or her senses, out of their daily lives and into a new paradigm.

The only character that seems initially impervious to this shake-up is billboard model Talya, played by Ruth Yeo-Peterman, who is experiencing her own radical transformation when we first meet her. Talya is introduced as a brilliant student, a reformed woman who has chosen to cover herself in a hijab to claim her grandmother’s Chinese Muslim cultural identity as her own and shield herself from too many unwanted stares and advances. Now the target of unwanted stares of a different nature, her new armor also leads her to quit modeling to pay tuition and distance herself from acquaintances who are alienated by her sudden reform. Talya is inaccessible, “impenetrable.” And this works to her strength for awhile.

Her past revisits her soon, though, when the photographer boy she once knew from school submits a very intimate, skin-bearing portrait of her to use in a billboard ad for a popular local spa.This exchange of young photographer Pete (relatable Shane Regan) selling the photo to Algerian-French spa owner, Mourad (a very fitting Erwin Galan), is unnerving in juxtaposition to Talya’s own need for discreetness. In monologues, Yeo-Peterman takes us back to the very beginnings of Talya’s identity formation, the root of her desire for protection and transformation. She holds a palpable tension in the room as she exposes Talya’s internal cave of dark, neglected corners: childhood trauma, cultural identity and womanhood.

In another world close by, Julie (a colorful Kathy Hsieh), loves to be pampered at Mourad’s spa and finds it to be a safe place to fantasize about days of her youth when she turned heads on street corners. Though she is a mother who pokes and prods at her own perceived body flaws, she tries to maintain a feminist-leaning ethic and vocabulary around her teenage daughter Cari (Sara Javkhlan), which dissolve all too quickly under the magnifying light of her own self-scrutiny.

Julie’s borderline obsessive behavior, which include frequent trips to the spa, is something that tart-tongued barista Andie (Lisa Marie Nakamura) is keen on as she makes her complicated espresso order every day.

But this all changes when the billboard goes up. And everyone is rattled. The billboard is it’s own animal, wielding a centripetal force that prompts dissatisfied Julie to lead a boycott against Mourad’s spa on one side of town, a conversation to rekindle between Talya and Pete, and Mourad to make the ultimate decision to concede to Julie’s boycott, respect Talya’s wishes and take down the billboard. Instead of becoming another punchline for droll Andie to entertain at work, the event leads her to confront her own self-loathing and embrace her own fragility and beauty.

The moral is that we are all contributors, partakers, actors and victims of the same oppressive industry standards. We must come together to undo it.

Post-play dialogue with the audience on one of the earlier performance nights proved to be just as provocative as the performance, delving into what womanhood means and how it changes, how white privilege and male privilege play into scenarios like Impenetrable, and the sometimes confusing and uncomfortable dynamics between women of color and white males. In an ideal world, these conversations should happen on their own, but the dialogue courageously and conscientiously facilitated by SIS Productions was ripe and carefully gathered in a safe space.