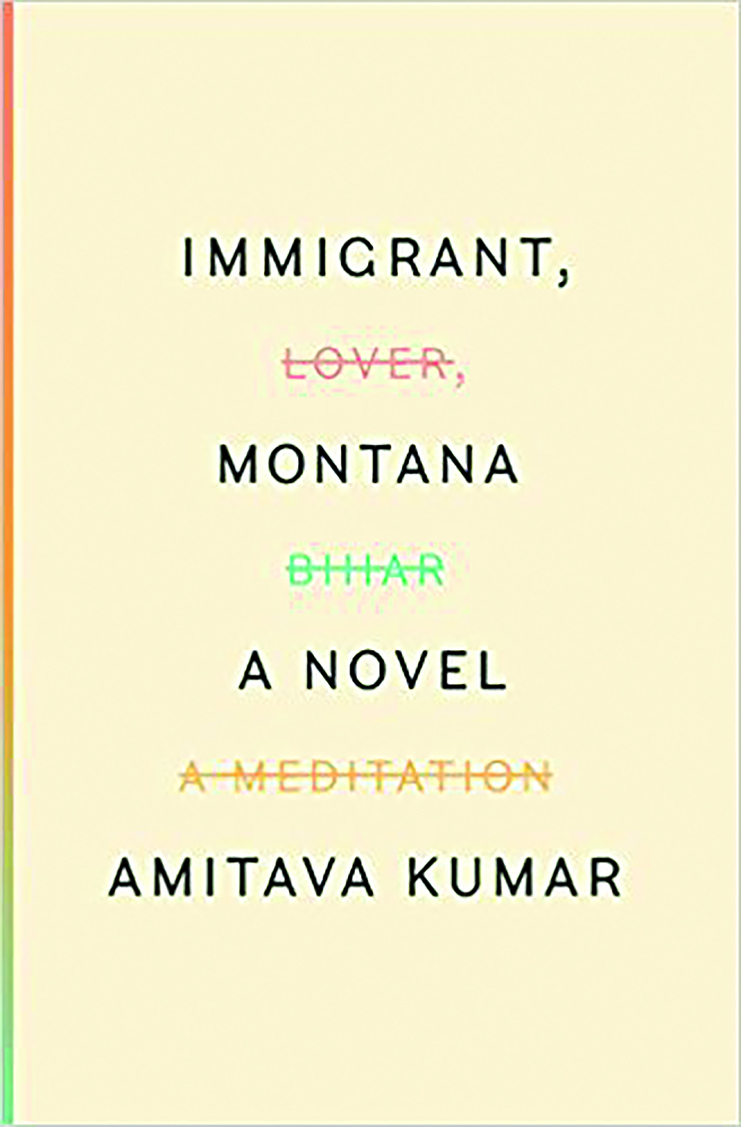 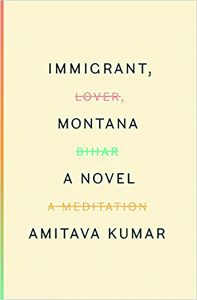 The cover of this book is intriguing—while the title is listed as Immigrant, Montana: A Novel, three other words or phrases are scored out, and they are “Lover”, “Bihar” and “A Meditation.” This cover speaks to the indeterminacy of genre and location in this book; the deleted words might have served just as well for the title. We also learn that the title is a pun—the narrative is focused on an immigrant, Kailash, but it also refers to a place that Kailash visits later in life, Immigrant, Montana. In the afterword, the author tells us that the place does not exist but there is a town named “Emigrant, Montana” that he had visited in 2008 after Barack Obama accepted the Democratic nomination in Denver, CO.

Thus the narrative blurs the boundaries between fiction and reality; peppers the story with real historical figures (Edward Said and Agnes Smedley for example) and also barely disguised fictional characters such as Ehsaan Ali, modeled on the late Eqbal Ahmed. It offers the reader a narrative about race, identity, masculinity and sexuality.

The protagonist is a young Indian graduate student who comes from a small town in Bihar and goes to college in Delhi. Like his college friends, Kailash is sexually repressed in a society that polices male and female sexuality, and he arrives in New York obsessed with sex. Kumar’s protagonist notes, “You look at him [the newly arrived immigrant] and think that he wants your job and not that he just wants to get laid.”

What follows is a narrative that explores Kailash’s complex and challenging relationship with several women over the course of his life. There is Jennifer, his co-worker at the book store, who guides him into American life and with whom he has his first sexual experience. Her accidental pregnancy, the abortion that follows, his callous and self-centered response to her, and their eventual break up speaks to a complicated race-gender dynamic between the brown man and a white woman.

This is followed by a relationship with Nina, a smart, feminist graduate student, which also ends badly, and eventually another failed relationship with Cai Yan, a Chinese graduate student in his cohort. Woven into these stories about the failed relationships is the narrative of his growth as an intellectual mentored by Ehsaan Ali. Through Ali, Kailash learns about anti-war politics, the development of a global socialist/leftist movement, and particularly US-Asia international relations. The narrative suggests that who Kailash is as an intellectual, as a lover, as an immigrant is part of a larger narrative of global politics of race.

The most interesting story in this political narrative is that of Agnes Smedley who was a journalist involved with Indian freedom fighters in the U.S. before World War II and who eventually moved to China to write about Mao’s world. Kailash’s personal relationships with women and with his mentor are loosely connected to this history of Agnes Smedley via his thesis research and that of the work of his then lover, Cai Yan, who goes to India to study the influence of Mao on Indian leftist movements.

The narrative is lucid, meanders in fascinating ways, and offers nuggets of insight into the immigrant intellectual’s life. It is also quite problematic in its structuring of the women as mere vehicles for the sexual and intellectual development of the protagonist with only a mild critique implicit in that. For all its fascination with the global Indian leftist movement, it is a story that is limited in its cognizance of both gender and class. Engaging overall, it also leaves the reader with much to ponder.