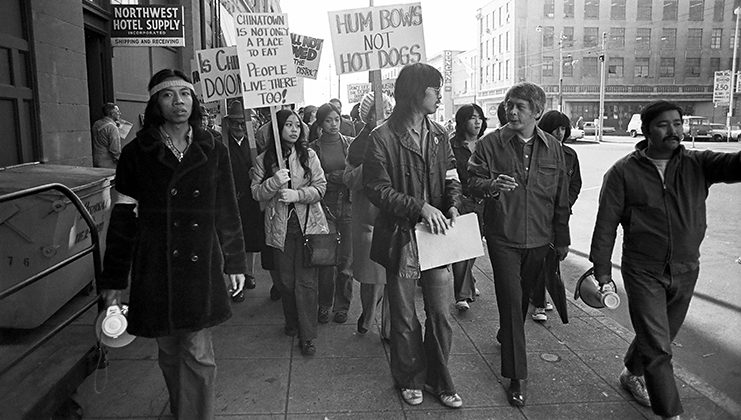 It’s one of the most recognized photos in the history of Seattle’s Chinatown International District. The photo documented a protest march headed to the Federal Courthouse to demand better housing in the CID, it featured Uncle Bob Santos along with the iconic slogan “Hum Bows Not Hot Dogs!”, all a response to the construction of the Kingdome that threatened to turn the CID into a parking lot. Taken on November 14th, 1972, the picture has become an image that’s defined the resilience of Seattle’s CID for nearly 50 years.

Like all photos that capture a moment in time, there’s much more to the story. Over the years the photo has been used by the community, often without attribution and sometimes even crediting the wrong photographer. So, let’s set the record straight, the photographer of this memorable image is Eugene Tagawa. In fact, the iconic nature of the photo was a family affair. The famous sign, “Hum Bows Not Hot Dogs!” was the creation of Eugene and his sister Kathy who painted many of the signs used in the march. The slogan was a riff on Fidel Castro’s defiant anti-American rallying cry, “Cuba Si, Yankee No” and the pacifist slogan “Make Love, Not War!” and became famous when it was picked up by the Associated Press wire service. It also became the title of Uncle Bob’s famous book, Hum Bows, Not Hot Dogs!

The photo was taken in Pioneer Square while the protest headed downtown. Interestingly enough, Uncle Bob who at the time was the executive director of Interim CDA, was not the leader of the march. He was there to provide moral support and to make sure things didn’t get out of hand. The organizers of the protest were a collection of young Asian Community activist and Asian Coalitions from local colleges, all who were part of the Asian American awakening wave of the early 70’s. Some involved with organizing and participating in the March met to organize at the St. Peter Claver Center; among the attendees were Frank Irigon, Pete Bacho, Al Sugiyama, Dick Sugiyama, Ruthann Kurose, Silme Domingo, Angel Doniego, Mayumi Tsutakawa, a “Who’s Who” of people who’ve become legends of Asian Community activism in Seattle. The protest was an example of what could be done with community solidarity that included the Roberto Maestas, Larry Gossett, and of course, Uncle Bob Santos.

This iconic photo speaks to the community’s resilience and never-ending struggle to keep the Chinatown International District the last authentic ethnic neighborhood in Seattle. Today, like 1972, we still face gentrification and struggle with neglect by the City, but Tagawa’s photo reminds us what solidarity and purpose can accomplish. When the photo was taken, the neighborhood was in dire straits; substandard housing was the norm, crime was pervasive, the neighborhood had declined so much that the City looked at it as a parking area for the Kingdome that was under construction. The neighborhood fought back and those early days of ‘70s Asian activism changed our community and shaped the CID we have today; affordable housing, International Community Health Services, Community Development Associations were all products of Asian solidarity, inclusiveness and activism.

Taking an epic photo is about being in the right place at the right time, Tagawa and his camera have documented many important events in the CID. Not a professional, but a great shooter who has a keen eye for capturing moments that tell a story. For him taking photos in the neighborhood represents a life-long and deep connection with the CID and Nihonmachi. His immigrant father, Takeo Tagawa played violin in the orchestra at the Nippon Kan Theater almost a century ago. His mother, Masako Nagashima Tagawa worked in her parents’ businesses on Main Street and Yesler Way before WWII.

In an iconic photo we see many things; composition, beauty, people we know, an important moment in time, what we don’t see is the photographer. Our community honors many who have contributed to making the CID a better place for all of us. It’s time we acknowledge someone who has spent much of his life documenting our progress and accomplishments, and how his images have enriched our community. And most of all recognizing Eugene and his sister Kathy Tagawa Sugiyama, who passed away in 2012, as life-long community activists, and honor their role in creating our community’s most iconic and lasting image. Documenting a moment in time when we worked together and welcomed solidarity from all groups with the single purpose to make life in CID better.

Since retiring in 2007, after a 32-year career at KING TV, Eugene Tagawa is devoted to volunteering his photography for many community non-profits including JACL, Japanese Community and Cultural Center, Keiro Northwest, Nisei Veterans Committee, Tsuru For Solidarity and the Minidoka Pilgrimage. It’s fitting that one of his favorite images is of a window in the Publix Hotel taken in 1974 where you can see the Kingdome under construction. Today the Publix Hotel remains, the Kingdome is gone, the Chinatown International District represented in a single image, resilience.