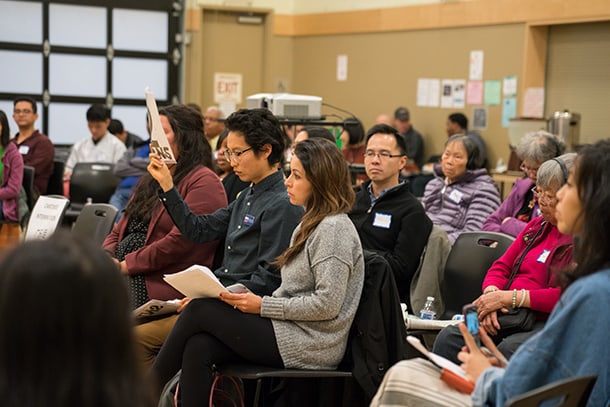 On Thursday, October 11th, a coalition of community-based and media organizations (see full list at bottom of article) hosted the 6th Annual API Candidate Forum at ACRS to inform the public about their choices on the ballot this November. The forum, moderated by Rep. Sharon Tomiko Santos (D-31), featured candidates from the 34th and 37th Legislative District races, the 9th Congressional District race and proponents and opponents of Initiative 1631. (To see the full list of races and issues on your ballot, go here).

This event was also partially sponsored by King County Board of Elections through their Voter Education Fund. In the current political climate there has been an emphasis on turning out voters of color. King County has invested $460,000 in grants into 33 community organizations to lean into that task to increase voter enrollment, turnout and education at-large.

First up was Initiative 1631, also known as the Carbon Emissions Fee and Revenue Allocation Initiative. The initiative would charge polluters a fee and then use the revenue to reduce pollution, promote clean energy and address climate impacts, under oversight of a public board. One of the facts that was raised during the discussion was that the CID has the worst air quality, along with the Beacon Hill neighborhood, which is dealing with the growing pains of development due to the new light rail station and housing developments.

Nicole Vallestero Keenan-Lai represented the I-1631 campaign and Lance Henderson represented the opposition to the campaign. I-1631 has received support from a range of non-profit environmental and racial and social justice organizations, who are under the Alliance for Jobs and Clean Energy coalition. The opposition campaign is mainly supported by Washington state farming, retail and building organizations. According to the PDC, the initiative effort is being sponsored by the Washington Petroleum Association and being financially backed by major energy companies.

The first issue of the forum brought out the recent report from the UN that was released earlier that week which, urges action within the next 12 years to avoid climate change. Vallestero Keenan-Lai also shared her personal connection to rising sea levels due to climate change through her family in the Philippines saying, “1631 is what we need to do to have clean water and clean air for the generations that come after us.”

Henderson stated, “It’s a poorly drafted initiative” that it would increase taxes by $2.5 billion over the next couple of years and exempts eight out of the 12 largest polluters in Washington state. Henderson also said the initiative would place a major burden on working families. He expressed concern over who would make up the board and whether or not it would be held accountable. Henderson warned the crowd that an unelected board, which this bill establishes to oversee the allocation of the Carbon Tax monies, would have “a blank check.”

Vallestero Keenan-Lai was quick to dispute these points. She said the board would consist of community members; moreover, this board has seats that are specifically reserved for People of Color. Vallestero Keenan-Lai addressed the tax and infrastructure mechanisms in the bill, which recognize that there is disproportionate harm from environmental pollution to communities of color.

Vallestero Keenan-Lai’s personal environmental arguments were particularly powerful, especially with the memory of the infamous smoke that plagued our region this summer and last summer and kept sensitive people indoors out of necessity and much of Seattle in face masks. Lance pushed back and said that “this measure wouldn’t touch 93% of polluters.” He didn’t clarify where that majority of polluters are and didn’t mention that many of those exemptions are due to those pollution sites shutting down in the early 2020’s.

Sarah Smith (no relation to Rep. Adam Smith) started off with a rally cry stating, “Now is the time of change. We’ve been suffering under the regime of these mega-politicians for a long, long time!” Rep. Adam Smith leaned in on this challenge and discussed his history with the API community; specifically, his work on mitigating the impact of the airport to the communities around it and argued that he isn’t silent on issues that matter to API communities in the district.

Rep. Tomiko Santos turned to the issue of student debt among young people in the community. Sarah Smith shared that she pays $800 a month in student loans, and she argued for a comprehensive education plan that includes debt-free universities, occupation-orientated technical schools, and a “speculative tax” on Wall Street transactions to pay for it.

Rep. Tomiko Santos then asked about Southeast Asian refugees, who are the largest refugee community in the USA. 16,000 are at risk of deportation due to old criminal records and many are DACA youth. Rep. Adam Smith supports a refugee relocation program. He specifically laid the blame on the cuts to refugee relocation programs on the Trump administration, calling Trump’s remarks on immigrants and refugees “one of the [nation’s] greatest embarrassments,” and characterized the administration’s detention and deportation strategies as “cruel.” Sarah Smith also called for reform, telling the audience that her father is green-card holder. She called for fully comprehensive immigration reform by dismantling Immigration and Customs Enforcement under the Department of Homeland Security and putting Immigration and Naturalization under the Department of Labor and Justice.

Another major issue to API voters is the thousands of inter-country adoptees who may face deportation. In the USA there are 29-45,000 adoptees who may face deportation and more than 2,000 in Washington state alone. Both Smiths agreed that closing a loophole in the law that allows this is a priority. Rep. Adam Smith shared that he is an adoptee and said, “If you’re adopted, you shouldn’t have to depend upon your parents. You should be able to get citizenship automatically.” He said that there is bi-partisan support for this.

Only candidate Joe Nguyen was present. Shannon Braddock had a prior commitment and was represented by a surrogate.

Nguyen shared his family background and that he grew up in the lower income POC neighborhood of White Center, and that this motivated him to run for office. “I want to show up for the people who were there for us,” he said. Despite the momentum of his campaign, he’s been out-fundraised 2-1, yet he’s garnered a lot of support and notable endorsements. Moreover, he’s the first POC to win a primary election in the 34th Legislative District, and if he wins the general election, he’ll be the first POC to represent it. Nguyen ceded his time to Braddock’s surrogate who read a statement on her behalf.

Last but, not least, was the debate between incumbent Sen. Rebecca Saldana (D-37) and her Republican challenger, Beth Broadway.

Broadway opened by expressing how she felt frustrated by the incumbent going unchallenged. She admitted that there’s nothing necessarily wrong with Sen. Saldana, but she argued that “we need to restore financial common sense to the way that we do things in our state.

Sen. Saldana argued that she as an “organizer” in Olympia could push for funds from Sound Transit that could create equitable projects in transport corridors. She also passionately argued that we need to close the gap in education funding.

Rep. Tomiko Santos broached the question of local and state law enforcement cooperation with federal immigration actions and whether they would they support the Keep WA Working Act that would limit cooperation to protect vulnerable immigrants.

Broadway argued non-cooperation would violate federal law and that if one is following the law, one doesn’t have anything to worry about. To clarify, Washington state isn’t obliged to carry out federal law (i.e. Sanctuary City/State policies), it just can’t violate federal law. Moreover, in the past year there have been immigration raids across the country targeting law-abiding undocumented people and even instances of challenging the status of lawful residents of the U.S.

Sen. Saldana said the immigration system is broken. She took a different frame and said that this measure would make Washington state a welcoming state. In the legislature, she worked with a People of Color caucus to hold the Department of Licensing accountable after they were non-compliant with an executive order to not have citizenship be a part of issuing drivers licenses and identification cards.

They also debated lethal force by police officers on unarmed civilians. Sen. Saldana enthusiastically backed I-940, a measure that would limit the ability for officers to use lethal force on civilians, and she also focused on investments in mental health and not criminalizing people, instead of relying on the current police force’s training. Broadway said that she supported police and understood the importance and danger of their job, while not addressing the central topic of the use of force against unarmed people. Though, she agreed that training could be a good thing, especially given that mental health is a precursor to police killings

On the issue of I-1000, the repeal of the state ban on Affirmative Action, Broadway said she would probably vote to overturn it but that as a citizen she would work to make sure that it wasn’t necessary. Sen. Saldana argued fiercely that we needed to repeal the ban. She gave the example of education and said, “We need people from our community to get hired.” In her closing remarks, Sen. Saldana said, “At the end of the day, government is the people…it’s important that it isn’t about political leaders but it’s about the people.”

In-person voter registration ends on October 29th. Visit the Renton office of King County Board of Elections or the King County Building in Downtown Seattle to register in person to vote.

Ballots were mailed out on October 17th. Postage stamps are not required this year to return a ballot through the mail and there are several ballot drop box locations that you can find, here.