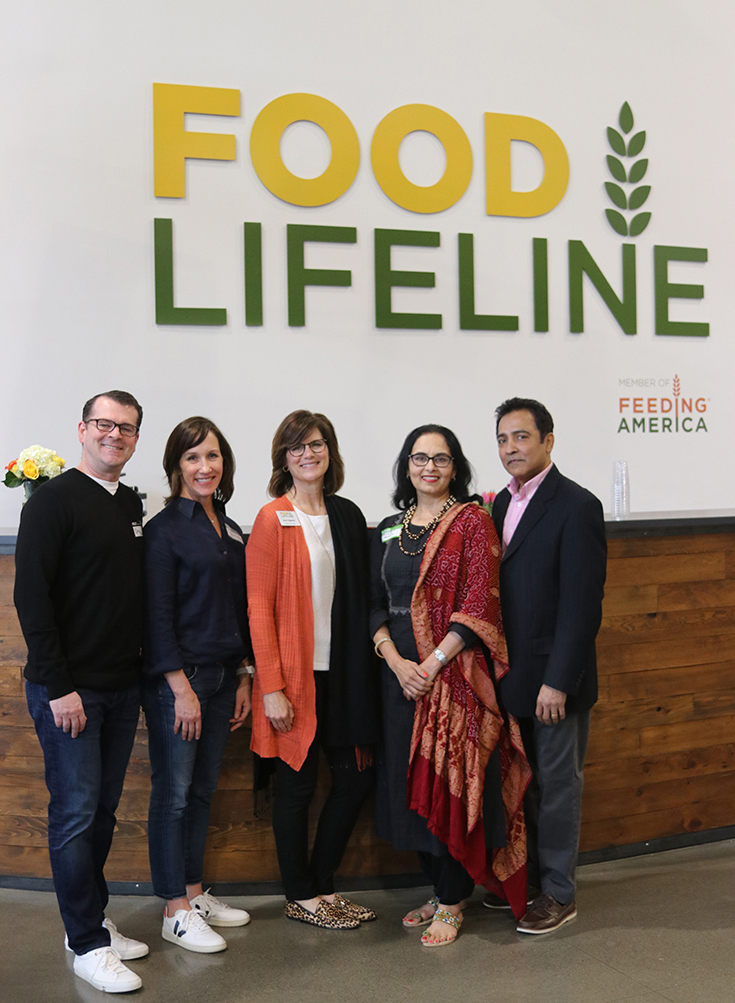 Last April, Raj and Aradhana (Anna) Asava, reached out to Food Lifeline in Seattle. They wanted to start a Seattle effort to get local Indian Americans involved in eradicating hunger. The Asavas started the Indian American Council in North Texas to get fellow Indian Americans invested in a movement to eradicate hunger in America. Their rallying cry is “hunger mitao” or “wipe-out hunger”. While they started out engaging with their local community and North Texas food banks, the movement soon expanded to Atlanta, Georgia.

Food Lifeline in West Seattle sources millions of pounds of food from restaurants, grocery stores and farmers. With the help of over 17,000 volunteers a year, they repackage large quantities of wholesome food into small batches that are then disseminated to some three hundred food pantries. Now Food Lifeline will be engage with the region’s growing Indian American community through the Indian American Council (IAC).

In Washington state, 12% of households were food insecure as of 2016. Native American, Black, and Pacific Islander households struggled the most. Washington Department of Health defines the term food insecure as “the limited or uncertain availability of nutritionally adequate and safe foods, or limited or uncertain ability to acquire acceptable foods in a socially acceptable way.” While the United States has a goal to reduce national food insecurity to 6% by the end of 2020, Washington state is far behind that goal.

How it all began

The Asavas immigrated to the Untied States in the 70’s and 80’s and had successful careers in the corporate sector before retiring in 2009 and 2010. During a lunch with Plano Texas mayor Harry LaRosiliere in 2014, Raj learned about a backpack program for children form food insecure families. He was shocked to realize that children in North Texas needed assistance with having meals provided outside of school.

When Raj came home and told his wife Aradhana, she was also in disbelief. “I used to tell Aradhana America is the land of milk and honey and plenty so everyone in the world deiced to come here so we never thought this type of hunger issue existed here,” said Raj Asava.

The issue of hunger resonated deeply for the Asavas. It wasn’t just that food was a basic need, but also that the Indian community come has seen the reality of what it means to be hungry.

“There is a respect, there is a reverence there. People have seen their parents put aside food for someone who was hungry before they would eat their own meal,” said Aradhana Asava. Ensuring that those who are hungry are fed and full is part of the tradition of “anadhaanam”, or the sacred offering of food to whomever most needs it.

The couple was compelled to action and brought up the topic with friends and acquaintances who were unaware of the hunger challenges in their own backyard. From then on, the Asavas dedicated themselves to engaging the Indian American diaspora to champion the cause of wiping out hunger and to “give where you live.”

The Indian community has long been self-focused, more likely to contribute to philanthropy measures abroad than volunteer time regularly to issues facing their local community. Indians in Seattle often contribute to organizations to Child Rights and You, Asha for Education or AIM for Seva, which focus on creating social justice and educational opportunities in India. But when it comes to local civic engagement and volunteerism, Indian-American faces are seldom seen at the front lines.

In Western Washington there is a change taking place – Indian Americans are seen holding office; Kshama Sawant, Manka Dhingra, and Pramila Jayapal are examples of people who have involved themselves in the service of local communities. But Raj and Aradhana want Indian Americans at all stages of life – whether they have just arrived on an H1-B visa, or are retired citizens – to be able to contribute at a local level. Volunteering is an accessible and impactful way to do that.

Aradhana Asava says that the first generation of Indian-Americans who packed up their lives and moved to the U.S. were focused on trying to break new ground in a foreign place. “They were inwardly focused and they needed to be because they were still kind of trying to protect their existence here, dig their heels, teach their children their own culture and values. There was a need for them to be totally, totally self-focused,” she said.

Eventually that needs to change. In order to battle the status of perpetual foreigner, Raj Asava says that contributing locally and “giving where you live” is the key to integrating. “This applies at an individual level, this applies at a family level, and this applies at a country level. You know, when their issues, when their pain becomes your pain, you have integrated,” he said.

Raj and Aradhana have been working with Food Lifeline to bring the Indian American Council’s Hunger Mitao movement to Seattle and had a successful launch at the West Seattle site on February 29th.  The Asavas will spend three years of their time helping get the initiative off the ground, but then they want local leadership to take over.

Mitra Karami, major gifts officer and the lead of Food Lifeline’s Hunger Mitao initiative, says that the ultimate goal is to mirror the Hunger Mitao model with other communities. “We definitely want to branch out to engage with other groups in the area,” she said.

While volunteering sessions in March have been suspended due to the COVID-19 outbreak, volunteers can participate as part of the Hunger Mitao movement every third Saturday of the month at Food Lifeline. More information: https://foodlifeline.org/hungermitao/