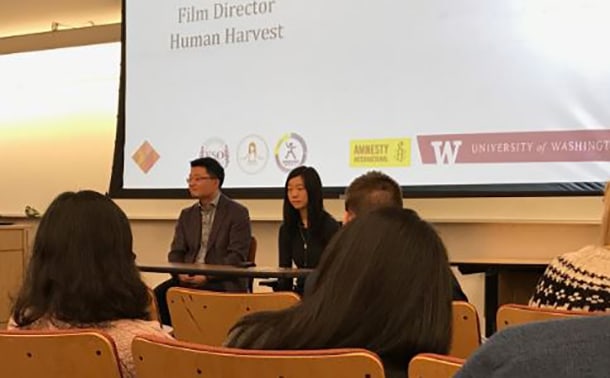 Human Harvest, a Peabody award-winning documentary about the reports of China’s illegal harvesting of organs, screened to a full lecture hall on the University of Washington campus November 9.

The film screening was organized by the Partnership for Community and Diversity, student group within the UW Evans School of Public Policy that’s focused on social justice. After the screening, the film’s director Leon Lee answered questions.

“These are the evidence and the hope is that you look at it yourself, you look at the reports these gentlemen have done and then draw your conclusion,” Lee said.

The film shows footage of Dr. Damon Noto, a spokesperson for Doctors Against Forced Organ Harvesting, giving testimony at a Congressional hearing. According to the film, China claims they perform around 10,000 transplants per year, and that they get the organs from prisoners facing execution.

The big question Noto then asks is, where are all these organs coming from? China did not have a voluntary organ donor system until 2010. The rest of the film builds on evidence indicating that these transplants are coming from living organ donors who are political prisoners.

Liz Harding, co-chair of the Partnership for Community and Diversity, was introduced to the film by Cheryl Yu, a member of the group. Yu and Harding both worked at human rights organizations over the summer and decided the film would be a good way to ground a conversation about this issue. Harding remembers a family of Falun Gong refugees telling her about witnessing the illegal organ harvesting and the torture they experienced before escaping China.

Falun Gong is a religion based in meditation and promotes healthy living. As the film explained, Falun Gong practitionershave been persecuted by the Chinese government since 1999. Many suspect that the Communist Party grew fearful of Falun Gong’s rising popularity.

A study from the film showed that the increased persecution of Falun Gong practitioners correlated with an increase in organ transplants since 1999. for a possible reason why Falun Gong prisoners are targeted for organ harvesting is their healthy lifestyle.

The film highlights the testimony of Annie, who worked in a hospital in China. Her husband was a surgeon and performed transplants. Annie describes discovering the use of Falun Gong practitioners as live organ donors.

Her husband confirmed what she had discovered, and horrified by the truth, she divorced him. Eventually her husband couldn’t take the emotional toll of the surgeries. He quit and was forced to flee the country.

In the film, Annie describes the process her husband told her about. Doctors would conduct extensive blood tests to try and find a match, and then extract the necessary organs and incinerate the bodies when done so there was no evidence.

According to Matas and Kilgour’s report the average waiting time to get a kidney transplant in the U.S. is 1,825 days. In China it is just 15 days. The film shows hospitals advertising wait times of as short as one week.

Medical professionals interviewed in the film explained that in order to promise quick waiting times, the surgeons had to have known when the person was going to die, to be able to extract the organs on time. This would suggest a kill-to-order system.

Matas and Kilgour’s attempt at investigating the hospitals in person failed when they couldn’t get visas. Instead, they were able to get several translators to pose as patients interested in transplants, and call hospitals across China to confirm information from them.

The translators asked how long it would be before they could get a transplant and who the organs were from. About 15 percent of hospitals gave gave short wait times,and admitted that the organs were being taken from Falun Gong practitioners.

After the screening, Lee talked about how he got into this subject. Lee is now a Canadian citizen, but he used to be a Chinese citizen and prided himself in keeping current with Chinese politics and news. When he read Matas and Kilgour’s report in 2006 he dedicated the next eight years to the documentary.
Lee emphasized in the Q&A his wish that people look at the evidence both from his film and from other
studies and papers.

He hopes people will learn about this issue and apply pressure both externally and internally for an independent investigation to determine if illegal organ harvesting is indeed happening.
“I would very much hope that at the end of the day, all my research was wrong,” Lee said.