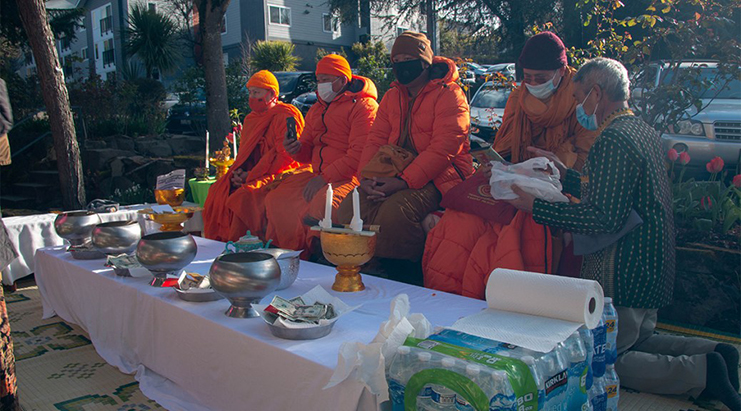 Note: This piece was originally published in the South Seattle Emerald and is republished with permission.

While the holiday traditionally takes place April 13–16, the local Khmer diaspora celebrates every weekend of the month. Khmer enclaves dot the I-5 corridor, from Snohomish County all the way down to Vancouver. Many in the community are blue-collar workers who can only celebrate on weekends as Khmer New Year is not an officially recognized holiday and therefore cannot be taken off from work.

According to Khmer legend, a heavenly Brahma named Kabal Mahar Prum descended from the heavens to challenge a young child named Thommabal Koma who understood all the Vedas of Buddhism.

After six days, the child still had not answered the questions. Fortunately, while he was moping under the shade of a large palm tree, a pair of eagles flew by and perched atop the tree.

He listened closely as they conversed.

The first eagle: What are we feeding on tomorrow?

The first eagle: What are the answers?

After Thommabal Koma presented his answer to Kabal Mahar Prum, the heavenly Brahma summoned his seven daughters from the heavens and said:

The deity Tungsa Tevy, the eldest daughter, took possession of her father’s head and placed it on a golden platter.

Every year on the day of the Mahar Songkran, the seven daughters take turns flying the Brahma’s head in a ceremonial circle around Mount Meru to bring peace and prosperity to the mortal realm.

The daughter that carries the Brahma’s head on the day of the Mahar Songkran is the new deity of that year.

That is why people who observe Khmer New Year:

So they’ll be prepared to receive the new deity that will bring peace and prosperity to everyone.

How can you celebrate Khmer New Year?

Go to a Khmer Buddhist Temple!

Cambodia is a majority Theravada Buddhist nation with over 90% of the country being followers of the religion. The temple and monkhood make up an important part of society, where all things intersect, from holidays to weddings to funerals. New Year festivities usually take place on weekends beginning early in the morning during all of April.

Cambodian Cultural Alliance of Washington’s (CCAW) 19th Annual White Center Cambodian New Year Street Festival has been around since the 2000s and features all things Khmer: From traditional Khmer dance and music to vendors selling BBQ beef sticks, this event has it all! Due to the COVID-19 pandemic, the event is virtual this year and features a food tour, performances by local artists, and more. Find more info on the following Facebook event page.

The University of Washington Khmer Student Association (KhSA) New Year Show is a mainstay of the community. Every year the group puts on a play inspired by Khmer folklore alongside good music and dancing and even greater Khmer food.

Support an Organization Doing the Heavy Lifting for the Community!

Khmer Community of Seattle King County — Established in 1979, KCSKC is one of the oldest continuously running organizations serving the Khmer community.

Cambodian American Community Council of WA — A statewide organization with almost two dozen organizations under its umbrella, CACCWA came together in 2015 as the community sought a way to collectively commemorate 40 years since the beginning of the Cambodian Genocide.

Formerly Incarcerated Group Healing Together — Founded in 2014, FIGHT helps organize and amplify the work of incarcerated community members including assisting with re-entry.

Khmer Anti-deportation Advocacy Group of WA — Founded in 2017 in response to ramped-up ICE raids into the community during the Trump administration, KhAAG is a community-led organization driving advocacy for and by individuals and families impacted by deportation.

Bunthay Cheam was born in the Khao I Dang refugee camp. He is a storyteller, activist, and lifelong resident of South Park.