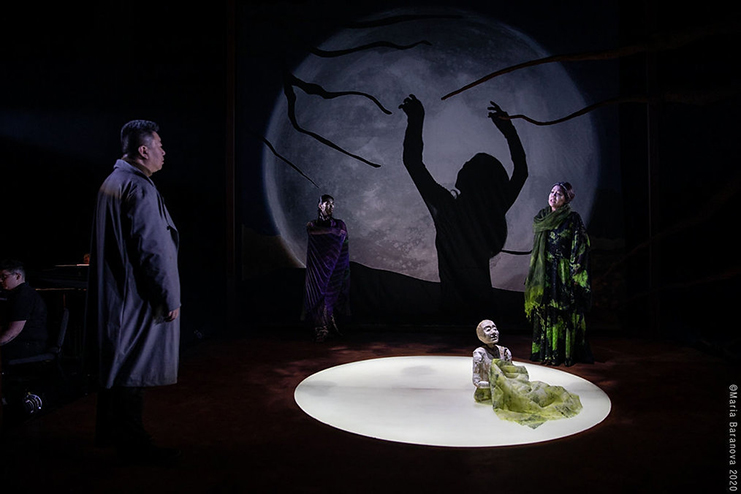 Garrett Fisher is a composer who is inspired by the sounds of many cultures, and one of the major influences he cites is that of Japanese Noh Theatre. He has created and composed seven pieces based on the Noh tradition since 2004, calling them his “Noh Series.” But his path to finding this influence from afar was not a direct one.

Fisher’s first exposure to Asian sounds occurred on the border of Asia and Europe, in the country of Turkey. “My grandmother was born and raised in Istanbul,” he said. “As a child I lived in Istanbul and vividly recall many things: the Muezzin’s daily call to prayer, the beauty of a Mosque’s geometrical architecture, the kindness of strangers welcoming us to their country, the city’s intense coexistence of old and new, the combination of song, devotion, and culture.”

Fisher was drawn to music and composition, and chose to study at Oberlin College and Conservatory, where he learned more about the musical and artistic traditions of the world. “My work-study job was in the music library cataloging CDs,” he said. “Oberlin’s Music Library is one of the best in the world, and I had the opportunity to listen to thousands of recordings. It was there that I fell in love with Indian classical music.”

The layers he discovered in this music proved illuminating. “There is something raw and real and soulful of Indian vocal technique, as if the voice is cutting through the strife of this world and finding beauty amidst it all,” Fisher said.  “The Raga is a way to express a living, ephemeral spiritual entity that exists underneath the music, something that we can’t touch but that can only be realized through the performer’s singular actualization of it.”

Concurrently at Oberlin, Fisher’s mentor Dianne Vreuls, among others, introduced him to stylized theatrical forms including Greek tragedy, Elizabethan drama, and Japanese Noh theatre. “Each uses a concrete sense of form which ultimately allows spontaneity and openness to those who master the forms,” Fisher said. “I’m drawn to this dialogue between structure and freedom and have looked to masters like Zeami, Shakespeare, and Euripides for inspiration in my own work.”

After creating original two pieces, The Passion of St Thomas More (1995) and Sebastian (1996), in his Passion Play series, and venturing into the first work, Agamemnon (1998), in his Greek series, Fisher began a creative exploration of the Noh tradition by developing the first of Noh series:  Moon in the Bucket (1998).

Through these projects, Fisher developed his collaborative style. “When participants, directors, designers, performers, have a sense of ownership in the work, it makes the work better,” he said. “Collaboration opens me up to different cultures and ways of thinking and I always feel changed and better for it.”

This teamwork-oriented attitude starts from the very foundation of each new piece. “My scores are more like blueprints that guide a process of working together than specific iterations of my own individual expression,” he said. “I want all elements to be interdependent, intrinsically linked.”

Fisher believes the work is better because of this shared process. “Many have asked me if it’s difficult to give up control,” he said. “But I’m not. I’m gaining a new sense of understanding.”

Precisely this kind of opportunity arose again in 2014 when Fisher was commissioned to create a score that combined contemporary Western opera-theatre with traditional Noh. “I had the opportunity to work with Tokyo-based Noh master Munenori Takeda on a new work, Yoshinaka, that was premiered at Seattle’s ACT Theatre,” Fisher said.  “Munenori comes from a long lineage of Noh masters, and some of his family members are considered National Treasures by the Japanese Government.”

This was a rare opportunity for Fisher – or any Western composer. “It was a huge risk for Munenori to be involved in this venture,” Fisher said, “and he had to get permission from his family and school to be part of the piece.”

That placed enormous pressure on Fisher to present both cultural traditions in a respectful way. “I knew that if I tried to create ‘Noh-like’ elements in a purely Western piece, it would look like I was co-opting a form that wasn’t mine,” Fisher said. “So I created a God character, performed by Munenori, that was a separate layer from the Human protagonists, performed by Western singers.”

But the separation of these elements soon relaxed and melded into the kind of blending that Fisher tries to foster. “This formalized structure was the starting point in which Munenori would feel the freedom to infuse the piece with his mastery, and also give the Western creative team permission to explore Noh-like elements in a way that would be seen as inspiration rather than replication,” he said. “Ultimately, the Western and Eastern merged as everyone began to step out of their comfort zones.”

Fisher reports that he focuses this kind of care in his pieces because cultural representation is very important to him.  “We live in a very fraught political and cultural climate,” he said. “It leads to issues of diversity in casting as well as cultural appropriation. I’m really thankful for this opportunity to work with people in this way. It makes me feel connected and part of something larger.”

When last speaking with him, Fisher was at work on his latest piece, Blood Moon. “Blood Moon is a poetic, opera-theatre piece for three characters who encounter the past on the night of a full moon: a nephew who returns to the mountain-top where he left his aunt to die 40 years earlier, the ghost of the aunt he abandoned, and the moon that presides over this night of reckoning,” he said. “A contemporary response to a 15th-century Noh play, Blood Moon uses choreography, puppetry and a Taiko-infused score to create a meditation on the end of life, the nature of joy, regret, and whether atonement is possible.”

Fisher believes this work will expand even his previous attempts at collaboration and cross-cultural representation. “I think that this is my most complex work to date,” he said, “and it combines Japanese Taiko with Indian harmonium, viol da gamba (Baroque cello), keyboard, and flute, both Western and bamboo.”

But what if those of us here in Washington state (or any where for that matter these days) are unable to visit New York to see Blood Moon? “I’d recommend listening to The Iris,” he said. “Inspired by the Noh play Kakitsubata, it combines my unique sound and collaborative style.”

Garrett Fisher’s work can be explored further at https://www.fisherensemble.org/garrett.

William Song’s pantings, at ArtXchange, are an act of positive and open-hearted affirmation