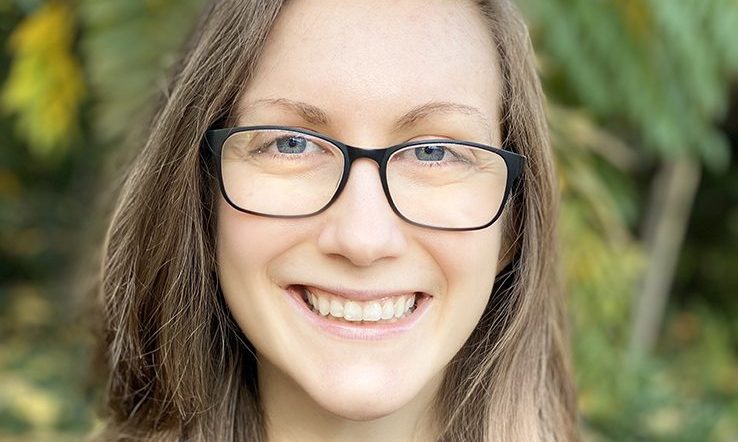 Grace Utomo’s future changed in a single moment. Five years ago, Utomo was employed at California Baptist University, and she typically commuted to campus on foot. But on December 3, 2016, Utomo was crossing Magnolia Avenue toward campus, and she was struck by a car while in the crosswalk. Among other injuries, she was left with a skull fracture and traumatic brain damage.

Fast forward to today, Utomo has set aside her career goal of spending her life as a concert violinist, and now has an essay, “Things Not Seen,” published in the current issue of Kaleidoscope. “Kaleidoscope is amazing because they highlight disabled artists, who are severely underrepresented in the arts,” Utomo said. “I submitted ‘Things Not Seen’ a year ago, when I was relatively new to my MFA program.”

At that time, Utomo felt the typical insecurities common to new writers. “If I’m being honest, I think my biggest fear was that they wouldn’t accept it,” she said. “Thankfully things turned out well!”

Utomo’s writing has helped her mourn the loss of who she had planned to be. “There’s no ‘clean’ way to grieve something you’re devoted to,” she said. “My first reaction was to block the sadness by doing something else, so I went back to school for an English degree.”

But she also needed to process her experience more directly. “I also started a blog to document recovery milestones,” she said, “and that morphed into writing about life as a young, competent disabled person.”

Utomo found that keeping busy had both positive and negative effects. “My choices led to wonderful opportunities, but if I could do one thing over, I would allow myself more time to grieve before starting something new,” she said. “Now I’m learning to do both.”

One main theme of Utomo’s essay is that of anniversaries. “The essay’s ending suggested we would go to Paris for our fifth anniversary this past December,” Utomo said. “Obviously that didn’t happen with COVID.”

But Utomo still has hope for future anniversaries. “My health still fluctuates, so it’s difficult to make plans for the extended future,” she said. “What I can say is that an international trip is still on our bucket list since we’d love to do Europe and a lot of my husband’s family lives in Indonesia.”

In the meantime, Utomo’s recovery has been a great learning process. “We can’t always control what happens to us, but we can control what we do with it,” she said. “I’m grateful that my parents taught me this as a young child, and the lesson was reinforced throughout my teenage years in church – and in too many nail-biting violin competitions.”

Sharing her message of hope became more important as she began to meet others who were in recovery from injuries. “I became passionate about the message in rehab when I realized that many of my fellow patients didn’t have something like that,” she said. “They’d suffered a traumatic event and were tempted to give up because they felt like they’d lost control over their lives.”

She found more commonalities among her fellow patients that she may have expected. “Not everyone is privileged to have the support I was given, but I think everyone can ask, ‘Even if something difficult has happened to me, what can I do to move forward?’” she said. “If you wait for something good to happen to you without being willing to make those choices yourself, you may end up waiting forever.”

Instead of waiting, Utomo has been encouraged by positive feedback on her Kaleidoscope essay.  “My faculty were my toughest critics last year while I was writing,” she said, “which I appreciated since I was a new student.”

For now, writing remains Utomo’s foreseeable future. “I’m currently working on an MFA in creative writing at the Savannah College of Art and Design, so finishing school is pretty high on the list,” she said. “I’ve actually just begun sketching my thesis, which will be a memoir about parts of my recovery I’ve kept private until now.”