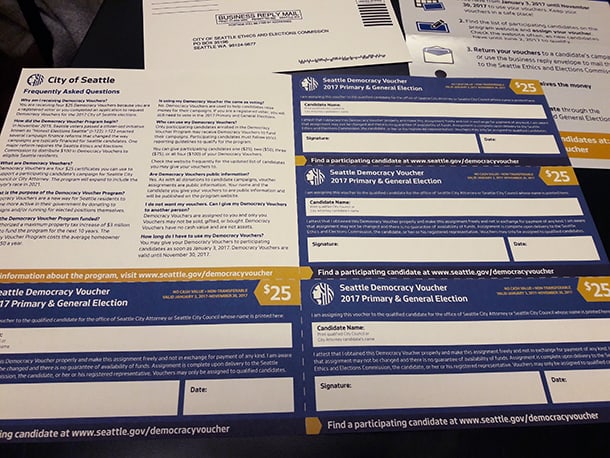 Democracy Vouchers essentially put $100 into the hands of thousands of eligible Seattle residents in January to create a way for more people to participate in their local government. So what’s happened with those vouchers — which were recommended to be placed in “visible areas” so as not to forget or lose them?

“Democracy Vouchers are vital to ensure the people of Seattle have equal opportunity to participate in political campaigns and be heard by candidates, to strengthen democracy, fulfill other purposes of this subchapter and prevent corruption,” according to the Seattle municipal code.

The citizen-led initiative known as “Honest Elections Seattle” recognized that money excluded people, both campaigners and contributors alike, from the democratic process. People with low-income, immigrants and people of color have historically had fewer resources and less means to get involved in politics. Research by the Sightline Institute shows that the people who fund Seattle’s political campaigns are overwhelmingly rich and white.

“The key thing is this program is meant to bring people into the political process earlier in the game than they have in the past,” said Wayne Barnett, executive director of the Seattle Ethics and Elections Commission.

Democracy Vouchers are intended to give people the opportunity to contribute to political campaigns without burdening them financially. With Democracy Vounchers, according to Barnett, money does not have to be the deciding factor in people’s political agency.

The Seattle Ethics and Elections Commission is working with organizations such as Asian Counseling and Referral Service to reach out to the diverse communities of Seattle.

“We have known for a long time that folks of color, low income folks, folks not tied to mainstream politics are not necessarily included in our democracy,” said Monica Ng the civic engagement program manager at ACRS. Ng explained that there are multiple barriers that keep such communities from being included.

Since a majority of campaigns are run in English, language is an obvious barrier. The Democracy Voucher Program, however, recognizes this problem and offers its major materials in many of the languages that are predominantly spoken throughout Seattle.

According to Ng, a holistic education about politics is just as important as educating people about the new Democracy Voucher Program. Seattle can welcome and encourage diverse communities by helping people understand and own their political agency.

“How do people see themselves as important to this process,” said Ng. “Why does this matter?” Talking to people and answering this question may take time and relationships, as no single answer makes sense for everybody. But according to Ng, it’s an important conversation to have and a great place to start.

In recent and past elections, only 1-2% of the eligible population in Seattle actually contributed to campaigns. According to Ng, the total contributions made last year are already comparable to the total contributions made so far this year. As of April 24, 10,840 Democracy Vouchers were returned and as the election season is expected to pick up speed in the coming months, more participation is expected.

For those who would like to participate but have misplaced their Democracy Vouchers since January, replacement vouchers are available. Similarly, if you were not a registered voter but are a Seattle resident, at least 18 years of age and a U.S. citizen, U.S. national, or lawful permanent resident (“green card holder”), you are eligible for Democracy Vouchers as well.

Applications for democracy vouchers are available in multiple languages here. For replacement vouchers, call 206-727-8855 or email [email protected] to request replacement Democracy Vouchers. The last day to make requests is Oct. 1 and the last day to return vouchers is Nov. 30.

More information, such as about the program, contact information as well as frequently asked questions, is available here.

APA Vote A Force To Reckon With … If APAs Vote

“Bodies”: Edu-tainment for the masses