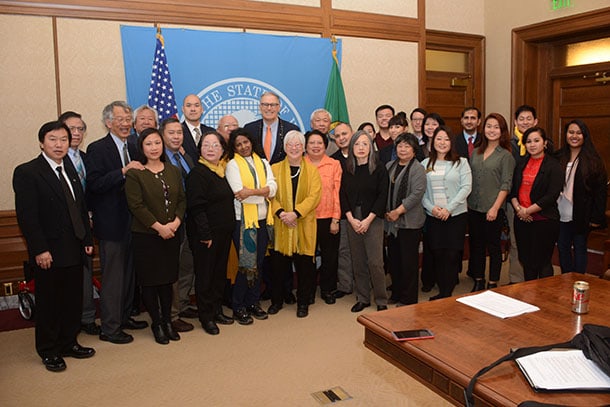 In August 1996, President Clinton signed the federal welfare reform law. The law made sweeping changes to the nation’s main cash welfare program for families now known as Temporary Assistance for Needy Families. The law also made millions of legal immigrants ineligible for a range of federal benefits such as food stamps, Medicaid and Supplemental Security Income (SSI). This change spread panic in immigrant communities throughout the country. There were even reported suicides of elderly immigrants who were about to lose their cash SSI benefits.

In Washington state, community groups lead by Asian Counseling and Referral Service (ACRS) began to educate and mobilize immigrants and their allies. Diane Narasaki, the executive director of ACRS, took a leading role in convening other interested individuals and groups. ACRS convened a series of community briefings in Seattle and the King County area to inform people about the changes that were contained in the law which were quite complex. As a result of these briefings, we began to organize and mobilize people and organizations to advocate for the state government to replace these federal benefits with state funded programs.

Asian and Pacific Islander leaders first met with then candidate for governor Gary Locke and asked him to fight for the creation of state funded programs. We then expanded our outreach to other parts of the state. For example, we held a meeting in Pierce County with immigrant leaders led by Lua Pritchard, the executive director of the Korean Women’s Association. In that meeting there were leaders from all of the various Asian and Pacific Islander groups, as well as the Russian and Eastern European immigrant communities. The outreach efforts expanded to other counties including Snohomish, Spokane, Yakima, south Puget Sound and Clark.

As a result of our organizing efforts, we held the first Asian Pacific American (APA) Legislative Day in Olympia in 1997, which drew over 2,000 APAs, making it one of the largest rallies in Olympia that year. The rally was a celebration of Asian Pacific culture with many groups performing traditional dances and greetings from community leaders from over 20 Asian Pacific Island nations represented in the crowd. Governor Locke and several legislators addressed the rally. Following the rally individual groups met with the legislators from their area. Leaders also met with the governor and legislative leadership. ACRS played a pivotal role in making the rally possible, including raising funds for transportation and meals, arranging buses for getting people to Olympia and setting up meetings with individual legislators.

Our efforts were a tremendous success. Washington state, more than any other state in the nation, implemented state funded programs that provided food, medical and income assistance to those immigrants who were about to lose their federal benefits. The legislature also established a naturalization program that would help immigrants to become U.S. citizens, thus making them eligible for federal benefits.

Our organizing in 1996 and 1997, led to the formation of the Asian Pacific Islander Coalition (APIC) of Washington State. APIC’s mission is to “promote equitable access to culturally competent and linguistically accessible health and human services, economic development for small businesses, civil and human rights, equal access to education and other concerns of Asian Pacific Americans, including immigrants, refugees, and citizens in Washington State.” APIC and ACRS have since organized annual APA Legislative Days in Olympia. This event typically draws over 1,500 APAs to Olympia to meet with their own legislators and to hold meetings with the governor and the legislative leadership. ACRS continues to play an indispensable role in APIC.

About four years ago, ACRS received a significant grant from a national foundation to promote civic engagement through voter registration, voter education, get out to vote drives, candidate forums, ballot parties and other activities that increase Asian American and Pacific Islander participation in our democracy. The AAPI Democracy Initiative was launched as a year-round program and increased the visibility of our civic engagement efforts in the larger community. As part of the AAPI Democracy Initiative, ACRS and APIC have joined with our allies in organizing around issues like immigration, environmental justice, tax reform, voting rights, criminal justice reform, health and human services programs, economic development for small businesses and other issues that affect our community. It is our hope and belief that this Initiative will make the AAPI community a major player in issues that are vital to our community such as immigration, health care and economic and environmental justice.

On Saturday, October 27, ACRS celebrates 45 years of service to our community at its annual gala. Come learn about other stories that ACRS has been a part of shaping and honor the people who have led efforts to improve the visibility, health and well-being of our community. You can get tickets at www.acrs.org/gala.