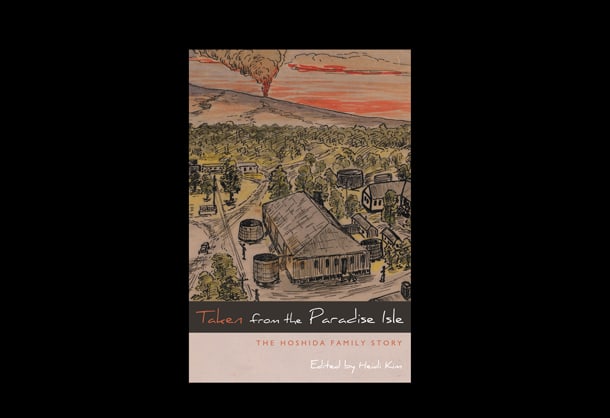 “An hour and 20 minutes and 1942 will end, heralding 1943! I’ve never dreamed of greeting a New Year in an internment camp. … It was unthinkable that the country which has been my home for practically all my life would turn me into their enemy. Sometimes I cannot believe that this is real and feel as though I am in a horrible nightmare. But this is real!”

Taken From the Paradise Isle: The Hoshida Family Story, edited by Heidi Kim (University of Colorado Press) is a book that takes us right into the direct experience of the incarceration of Japanese Americans during World War II, for it is based on letters and writings of a man who was picked up in Hawai‘i and later incarcerated in many facilities on the mainland. Taken From the Paradise Isle is a memoir by George Hoshida who was arrested, apparently, for his Buddhist and judo activities and he passed through military and INS camps at Kilauea, Sand Island, San Antonio, Lordsburg, and Santa Fe before being paroled to join his family in the WRA camp at Jerome, Arkansas. He happened to be Issei but his wife was Nisei, and she and their children (minus a daughter who was in a nursing home) chose to join him on the continental United States, even if it meant life in an incarceration camp, and so they moved from Hawai‘i to Jerome.

During this four-year period, Hoshida and his wife Tamae exchanged letters while she was still in Hawai‘i and he also kept a diary and sketched many pictures of various aspects of his life during those long years. He decided that he would document his ordeal and put it together so that his family and others would know about what happened to him and his family.

Editor Heidi Kim has done a masterful job of combining his work and official documents and adding her research to give us a very good and comprehensive picture of this family’s difficult experience. Comparatively few were picked up from Hawai‘i and so those Hawai‘i residents who were incarcerated were viewed with suspicion by their fellow Japanese Americans in Hawai‘i. The thinking was that they must have been guilty of something to merit such treatment, and this was another side effect of the government’s oppressive policies. Tamae was lucky in that their many relatives helped and cared for them and also social services were available to meet their needs.

Hoshida was very aware that he was a victim of prejudice and only because of his association with the Buddhist Church and his judo. He was also aware that perhaps an informer was the reason he had been singled out, and so his imprisonment was doubly infuriating. The correspondence with his wife is on the surface bland because neither wanted to burden the other with bad news and the letters were subject to censorship. However, one can read between the lines and pick up on the anxiety and uncertainty of their situation.

Tamae decided that she did not want to endure the separation from her husband so with her children, she moved to Jerome, Arkansas, site of one of the incarceration camps and was able to join George. In order to do this, she gave up their house and so they had a difficult time upon return to Hawai‘i.

Here is another story about how America’s policy of imprisoning Americans of Japanese ancestry during WWII affected one family. As we accumulate these stories, we are getting a deeper, more complex picture of the heavy toll that this policy had on our community. It was a tragedy whose effects are still with us.