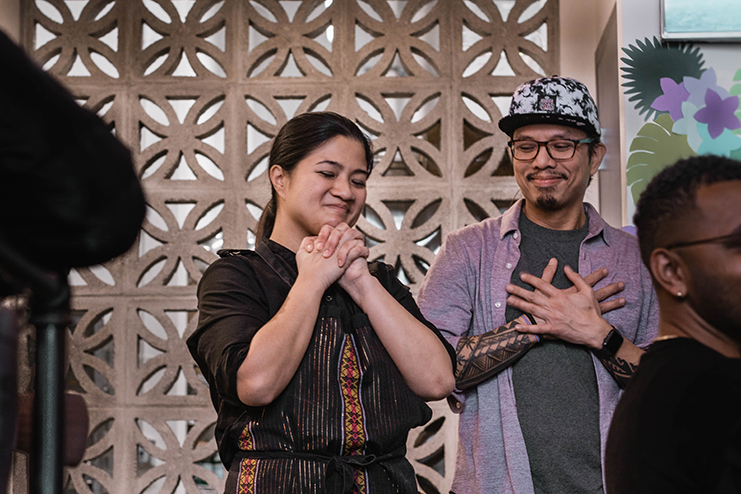 It is no secret that Hood Famous Bakeshop is famous for its delicious ube cheesecake, but as March 2019 rolls in, Hood Famous is revealing something entirely new: a brand new storefront right in the International District called Hood Famous Cafe + Bar. This is such a treat as many of their customers who love shopping Hood Famous’ desserts at Uwajimaya and their Ballard location can now finally sit down and enjoy some of Hood Famous’ signature desserts like ube cookies, calamansi bars, and so many more Filipino and Asian Pacific flavors made by the Hood Famous team. To welcome Hood Famous into the neighborhood, the IE sat down with Hood Famous’ founders, Chera Amlag and Geo Quibuyen.

IE: What made you want to start a second storefront?

Chera and Geo (C & G): We wanted a space where people can sit down. Our Ballard shop is mostly a retail location and for production. At our second location, we’ll be carrying Kalsada coffee which has Phillipines origins.

IE: Are you going to introduce any new desserts or pastries?

C & G: Hood Famous Bakeshop grew out of a monthly dinner pop-up series, (Food & Sh*T), people would receive a full savory course with dessert and Hood Famous was the dessert of those dinners. We stopped doing the monthly pop-up and we always want to re-introduce savory items too but still very dessert centered. We’re working on a handful of things we’d like at the second location like a line of quiches with Philippines-inspired breakfast dishes, like longanisa sausage and egg, sauteed bitter melon, and eggplant torta. And pickled items like fresh, small plate kinds of stuff.

IE: What made you choose the International District?

C & G: Even in the beginning [of Hood Famous], we were entertaining the idea of a brick and mortar; the ID has been at the top of our list. We have fun memories and roots in the neighborhood, our first post-college jobs, Geo at Wing Luke on 7th and Chera at WAPIFASA managing youth prevention programs, were around the ID.

In our twenties, it was all about building community and learning community, like at Isang Mahal, this monthly open mic series at the Theatre Off Jackson. It [International District] was our stomping ground for our twenties, and once we moved on to other career paths in the neighborhood it was definitely the connecting path especially in the Asian American community.

The entire time we were wondering if we were to open our own brick and mortar if this would be our first space, even when we were scoping out Ballard. It just wasn’t the right time and place. We were still getting our feet wet in Ballard and dreaming of a location and an opportunity opened up around this time last year. And we’ve tracked the Publix rehabilitation and were in contact with some of the folks there. But it couldn’t have worked out better. Turns out, the smallest space in the spot was available, and we jumped on it. It was ahead of schedule of when we wanted a second location with high foot traffic and [was] an opportunity to be a part of a neighborhood that is updated but still rooted. There’s lots of different development but a development that is operated by a longstanding force in the neighborhood. We knew who our landlords were.

IE: What’s an ideal day in the shop or the atmosphere?

C & G: We like spaces like this [the Panama Hotel, where the interview was held], we like spaces for gathering. We hope to fill and be part of a multitude of spaces that are an homage to the historic nature of the neighborhood but rooted in what’s going on now. Places you can stop in and grab and go. Or if you do want to chill for a little bit that’s cool too.

IE: Who are some of the people that have helped make Hood Famous happen?

C & G: These are all folks who have ties and connections with the community. La Union Studio [the architects] are young folks, homegrown Seattle kids. They went to college and now they’re architects. They’ve worked on Bah Toh on Jackson. General contractor and construction team is BYD Construction.

I think a big thing about small businesses is the way small businesses can have an impact on the local economy so in the process of building a space there’s a lot of money going to investing in that. Do you just go to a random company, or, for us, make a concerted effort to compile a team with shared values as us, and then these funds continue to circulate among other small businesses.

For instance, our electricians are a local company owned by queer womxn, QGeneration Electric, and all of their electricians are all female. And in a field like that, that’s just not something you see, quite frankly. And her family and her wife work in the ID as well, so they’ve done a lot of supporting of the community. It’s easier to go with a big company that takes care of everything—but the thought process of the team is important. And the funds go back to small, community-based businesses and organizations who in their own way give back to the community.

The Hood Famous team and the staff themselves from top to bottom, whether it’s the creative team, or our bakers in Ballard, to our delivery team, have all played some role behind the scenes in making this transition possible whether it’s continuing the outreach or branding work or design. It’s just good to have talented people in different fields and different mediums and to work together on a mutually beneficial thing. We’re helping us, we’re helping them, we’re furthering our reach in our work and business sustainably and finding a way to economically support one another.

C: One of the things important to me as a first-generation business owner is how one owns a business and runs a business. I used to work as a college advisor supporting first generation college kids. You have all of these institutions and resources because we know that if you didn’t have anybody before you, it’s that much harder. And the emotional support. You can’t understate how important that is, and helping someone transition as a person being able to go to college.

I am first generation, and Geo is, and we’re first generation business owners and so much of this process is learning as we go. There’s so many people we reached out to because we didn’t know. And so many people we reached out to that have been so supportive. so it’s important to me to share part of that process so when people see a dessert come to the table, it’s a whole team and whole community that makes that happen.

We don’t come from money. We aren’t inheriting a business. And I know in talking to other business people, finding the capital to start a business is this mystical thing. And there’s so many nonprofits for funding like Business Impact NW or Craft3, and they’ve been really important in helping us figure things out and finding the resources to make this happen. And that your choices aren’t limited to knowing a rich friend or going to a bank or have to be rich yourself. There’s nonprofits and communities that know if you support small businesses, and ones that are womxn, PoC, or veteran owned that support the local economy.

G: It’s important to us to ensure we’re supporting this ecosystem in the small business world, that we partner and collaborate with community organizations that are community-minded. I would even just expand the circle to the community as a whole – the Asian American community, folks of color, immigrants, students, educators, artists.
I can’t imagine doing this in another city or in a kind of Seattle that didn’t have that kind of ecosystem. And despite that, or maybe even because of that struggle – whether it’s space or fighting displacement – in spite of it and in part due to that, people don’t want to see a hyper-individualism that makes you feel like you’re in competition in your own community that’s more similar to you than not.

If you have that presence, you don’t have to be with friends with everybody, but the spirit of that presence is that somebody else’s success – and that person is from your community – actually benefits you. And we know that, and we want to continue supporting other people. And for that I would shout out the community, and our relationship with the city, and I’ve traveled enough to know this isn’t the case in most places.

C: Creating your own spaces where you are or in spaces where you are marginalized, it’s good to ask what values are being adhered to. I think it’s fitting we communicate that through the IE. You even see it whether it’s food, music, or whatever, if you’re chasing mainstream media attention to the point that you’re not even supporting media in your own backyard and community. I put restrictions on mainstream media as a path to our own creation by being our own storytellers and supporting our own media.

Hood Famous Cafe + Bar will be opening its door in the International District mid-March, 2019, inside the Publix Hotel at the corner of 5th Ave. S. and S. King St.