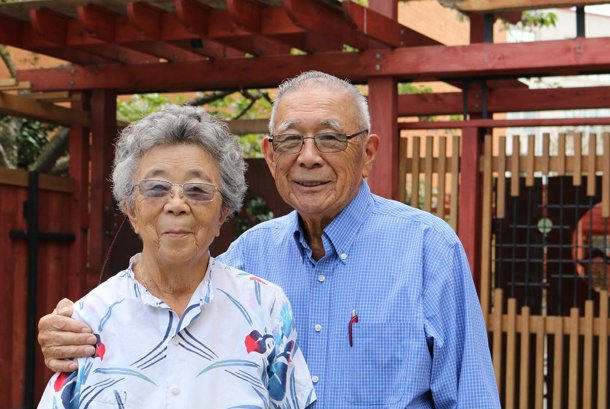 Tosh Okamoto, a dedicated soldier for the entire Japanese American community and lifelong community activist, passed away on May 19, 2018. The International Examiner presented Tosh with a Lifetime Achievement award at its 2011 Community Voice Award annual banquet. IE board member Gary Iwamoto interviewed Tosh and wrote about his life in the article that follows.

Toshikazu Okamoto is a Nisei (second generation Japanese American) veteran and proud of it.

He has served our country and our community with distinction. Like most Japanese Americans, “Tosh” was sent to an internment camp during World War II. But ironically, the same government who questioned the loyalty of Okamoto and other Japanese Americans by sending them to internment camps decided that Tosh was loyal enough to be drafted into military service. At the age of 17, he joined the all Nisei 442nd Regimental Unit and was stationed in Italy toward the end of the war.

When the war ended, Tosh went to Edison Technical School to learn the skills to be an auto mechanic. But Tosh couldn’t find a job because the auto shops would only hire union mechanics. The union wouldn’t accept him, telling him that the waiting list to join the union was too long to get a job immediately. He knew this was a lie because the white students in his program found jobs easily. He eventually found a job with the Seattle Fire Department where he worked for 32 years, ultimately ending up as a supervisor in charge of vehicle maintenance.

In 1971, Tosh was serving as the Commander of the Nisei Vets Committee. As part of his duties, Tosh visited Isseis (first generation Japanese Americans) living in a nursing home, who had lost sons in the course of military service, called “Gold Star Parents”. Tosh happened to visit an elderly Issei man who was living in a nursing home on Seattle’s First Hill. The son of that Issei resident came up to Tosh and asked him for change. Tosh was told that the staff would only respond to a patient pushing the call button if they had change in their hand; otherwise they would be ignored.

Tosh was upset at the treatment of that “Gold Star” father, the father of a Nisei veteran who died in the war. At about the same time, a Japanese boarding house was closing. Tosh saw that the safety net for the Issei elderly was disappearing. Aging Issei had nowhere to go to receive culturally sensitive nursing care. Tosh shared these observations with Tomio Moriguchi and both men decided that it was imperative to create a nursing home environment which could meet the needs of Isseis.

Tosh and Tomio, along with Glen Akai, Harry Kadoshima, Sally Kazama, Fred Takeyasu, and Henry Miyatake, – the “Magnificent Seven” – formed Issei Concerns (later Nikkei Concerns) in 1975. Their initial goal was to develop a nursing home to meet the cultural, social, language and dietary needs of elderly Nikkei. Of course, no one had the expertise to create a nursing home. But coincidentally, Tosh’s eldest daughter, Joyce, had just started working at the Keiro Nursing Home in Los Angeles. Through Joyce’s connections, Edwin Hiroto, the Director of Keiro, came to Seattle who advised the seven to mobilize the Japanese American community.

The group started a community-wide funding campaign. A site and facility were found at the old Mt. Baker convalescent center. In 1976, Seattle Keiro Nursing home opened its doors and it wasn’t long before the nursing home outgrew its limited space. In 1985, when Tosh served as President of the Board, Nikkei Concerns embarked on its second major fundraising effort for a new $6.6 million, 150-bed facility. On May 6, 1986, the new Seattle Keiro broke ground at 16th Avenue and Yesler Way and opened one year later. Today, Nikkei Concerns serves our community through its four programs: Seattle Keiro, Nikkei Manor, Kokoro Kai and Nikkei Horizons. And Tosh is still involved after 35 years with Nikkei Concerns, serving on its advisory board.

While his work with the Keiro Nursing Home is Tosh’s proudest achievement, his contributions to the community don’t stop there. He has served on the board of the Kawabe Memorial House, including terms as President and Vice President, since 1987. He helped found the Meiji Kai Senior Lunch Program which served Issei at Nisei Veteran’s Hall for years. He served as a community advisor for the Kame Project (dementia research of Japanese Americans) and Japanese American Community Diabetes Study. He helped establish the National Japanese American Memorial to Patriotism in Washington DC and was the funding co-chair for the Pacific Northwest which raised more than $1.6 million for the Memorial. He has been a long-time member, past Commander, and current Executive Board member for the Nisei Veterans Committee. And at the age of 84, Tosh shows no signs of stopping.

Tosh has been married for more than sixty years to Toshiko. He is the proud father of four children, Joyce, Susan, John, and Sheila, and grandfather to nine grandchildren. Long-time friend and collaborator Tomio Moriguchi said, “Tosh as a World War II veteran, is a great, caring, outstanding provider of quality of value and life for his whole immediate and extended family. A person that has been able to extend these values to his community.”