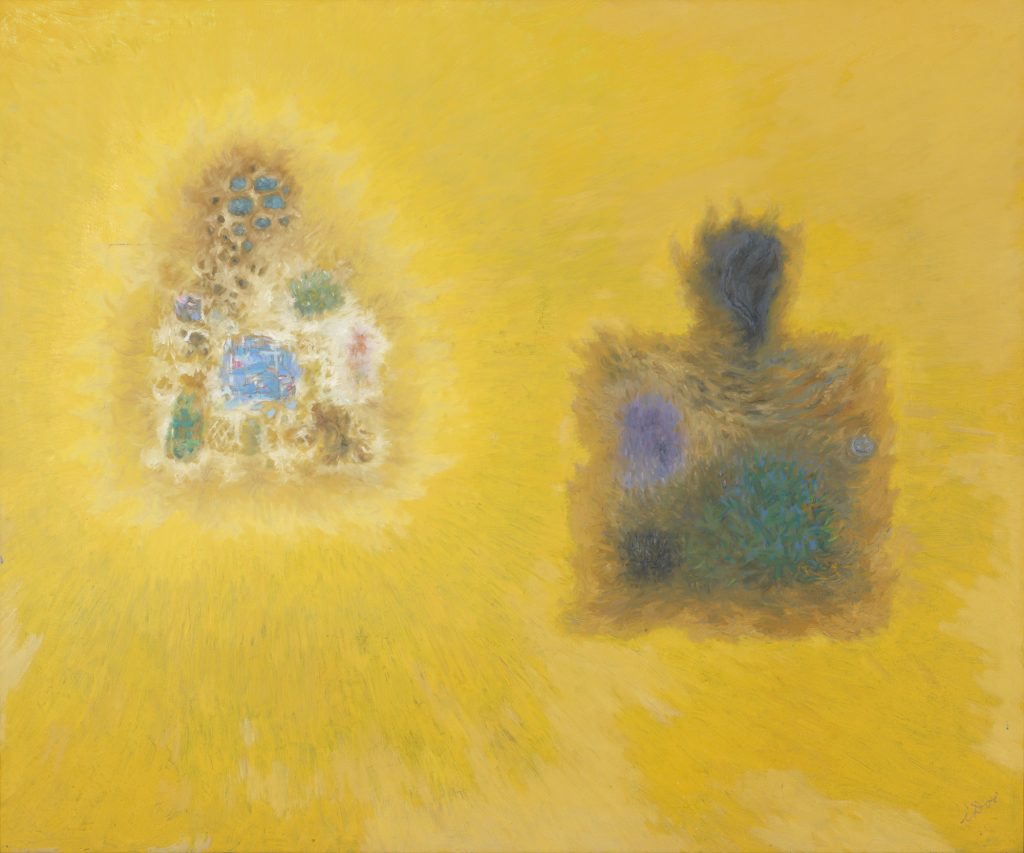 At the end of WWII, Europe was in ruins and the center of modern art shifted to New York. The Abstract Expressionist art movement took root here and its influence echoed around the world. Artists like Jackson Pollock, Mark Rothko, Philip Guston, Willem de Kooning Robert Motherwell and many others came out of this movement and became if not household names, extremely well known figures in art history. What is less known is the fact that there were many Asian American artists in New York at the same time also doing good work, a significant number from Hawai’i.

Which brings us to this review of “Abstract Expressionism: Looking East from the Far West” (Seattle artist George Tsutakawa is included in this show) currently at the Honolulu Museum of Art curated by Theresa Papankolas through January 28, 2018. The museum press release stresses the point that “It is the first museum exhibition to bring artists of the New York School together with Asian American artists who studied and worked in New York in the 1940s and 1950s, examining the influence of Asian intellectual and artistic traditions on artists long revered as uniquely American.”

I wish to thank writer Wayne Muromoto and Hawaii Herald Editor Karleen Chinen for permission to reprint the following review which originally appeared in that publication (see www.thehawaiiherald.com). In addition, my thanks go out to Lesa Griffith of the Honolulu Museum of Art who gave us permission to reprint the photos and to poet Wing Tek Lum who helped us make the connection.

Review by Wayne Muromoto
Special to The Hawai‘i Herald

(This article originally ran in the Dec. 15, 2017 issue of the Hawai‘i Herald and is republished with permission)

Many years and maybe at least 20 pounds lighter in girth ago, I had lunch with a prominent AJA businessman, now deceased. During lunch, the subject of modern art came up. He was a 442nd Regimental Combat Team veteran and a behind-the-scenes Democratic Party mover and shaker who was deeply involved in giving monetary support to many fledgling art organizations.

He regaled me with a story about walking around the State Capitol building with the newly elected Gov. Ben Cayetano, America’s first Filipino American governor. He pointed to a sculpture by Bumpei Akaji and said, “Eh, Ben, what do you think about this?”

According to him, Gov. Cayetano replied, with some amount of working-class disdain for fine art, “I don’t know anything about art.”

So dear reader, forgive me if I run about a bit in giving some background to this show. I am channeling that businessman.

But I’ll cut to the chase first: “Abstract Expressionism: Looking East from the Far West” is a great show. See it. Yes, it costs a bit. Even if you’re a Honolulu Museum of Art member, you’ll have to shell out 10 bucks more to see the show. But it’s worth it. Heck, a night out and dinner in Waikïkï costs more, and you won’t get as much visual fulfillment as an afternoon spent at the exhibition. You’ll get to see benchmark examples of famous modern artists that you’d rarely see outside of having to fly to New York City in order to go to the Museum of Modern Art and the Guggenheim. You also get to see a treasure trove of local modern Abstract Expressionist artists whose works are set right next to the more famous luminaries of art history, and it all starts to make sense. Everything starts to make sense.

Abstract Expressionism was a movement that took the art world by storm right after World War II. Europe had been devastated by the war, so the center of international art moved to the East Coast, and to New York City, in particular. American artists were at the forefront of this style. As its name implies, it was largely abstract in that it doesn’t represent or refer directly to anything “realistic-looking.” And it was meant to express unconscious moods, emotions, thoughts that couldn’t be written down. The paintings and sculptures were gestural, movements of line and splatters of color, bundles of wire twisted and spun, bronze carved into spikes and trident shapes, ceramic balls and cylinders that represented nothing else but their own “is-ness.” That’s not a painting of something so much as it’s a painting of paint. Look at the surface, the energy of the stroke, the dab, the color, the ferocity of the swish. The ceramic piece is not a mug to hold coffee, but rather a cylinder that is all about its own shape and glaze and color, apart from whatever utilitarian usefulness it may serve.

The style had become so popular by the 1960s that it ended up being parodied and reduced to corny imitations, all the way to the 1970s, during which a generation of art instructors taught several generations of college art students to forego technique and just “express yourself” without much thought to concepts or subtlety. Explosive originality eventually gave way to “me, too” sameness. As they say, even monkeys could paint like that. Actually, at the end, monkeys could paint like the worst of the worst of abstract art. And they did. As did basketball players bouncing balls covered with paint on a canvas, trained elephants and other assorted kooky animals and gimmicks. The raw power of the original artists faded away into formulaic copies that said nothing, but would look nice in lobbies and corporate boardrooms.

With this exhibit, however, and the intervening decades, we as viewers have a refreshing look back at the powerful beginnings of Abstract Expressionism. There are works here that are by the most pivotal figures in the movement: Robert Motherwell, Willem de Kooning, Barnett Newman, Jackson Pollock, Mark Rothko and others. Side-by-side with these luminaries are artists with Hawai‘i connections: Isamu Noguchi, Satoru Abe, Isami Doi, Tadashi Sato, Tetsuo Ochikubo, Harry Tsuchidana, Bumpei Akaji, Sueko Kimura, Ralph Iwamoto, George Miyasaki, Keiichi Kimura, Reuben Tam, Jerry Okimoto, Toshiko Takaezu and others.

Set side-by-side, they give us a greater context for how much artists with local connections were right up front in the vanguard of this movement, especially since many of them were working in New York after World War II and were in contact with their fellow Abstract Expressionists.

However, the exhibit is curated to show not only the influence the more famous artists had on our own artists, but also how Asian art and many of the local artists’ own cultural backgrounds contributed to influencing the Abstract Expressionist movement. The exchange of ideas was going two ways.

There is a piece by Robert Motherwell, for example, titled “Untitled,” (1963) which is a big splash of oil paint on canvas that most clearly looks like the vigorous action of East Asian kanji calligraphy. This amalgamation of Eastern and Western ideas is found, if you look for it, throughout the entire show, and is reflected in the printed histories of many of the artists. Isamu Noguchi, for example, studied under the great European sculptor Constantin Brancusi, but he also traveled extensively throughout Japan and absorbed the essence of the craft and aesthetics of that country. So if you look at many of the Abstract Expressionist pieces as you would a piece of strongly brushed calligraphy, taking in the brush stroke energy, direction, thickness, the play of positive and negative space, you have an insight into what could be the baffling world of Abstract Expressionism.

Personally, my favorite piece in the show — and for which I would gladly pay just to see it again — was the original artwork by Isami Doi titled “My Mystical Pilgrimage.” A copy of this piece graced the cover of The Hawai‘i Herald’s 10th anniversary edition in 1990.

Doi was a mentor of sorts to a generation of local artists. He went to New York City to study art long before many of them and returned to Hawai‘i. He went through several personal and financial trials and hardships before painting this small, powerful piece of two abstract shapes set against a shimmering, glowing, multicolored background, as if they were two sitting Buddhas in meditation. It is, of course, an abstract piece. One cannot clearly say what it represents, if anything, but the very obscureness allows us to feel its unearthly mystical nature from an artist about which prominent local sculptor Satoru Abe once said, “. . . I sort of went through all the masters, modern and what not, and finally came back to Hawai‘i and found for me a very true artist. For me, he’ll remain the greatest artist.”

Such recognition eluded Doi for most of his life, and when he returned to Hawai‘i he had to work at a variety of jobs to support his family and his art until he finally received accolades at the end of his life, when his health began to fail him.

But art is not just about personal drama. It is set against social, economic and cultural history. The businessman who shook up a governor told me that the reason he supported artists in Hawai‘i was that the Nisei had achieved political and economic clout in his lifetime. But until a group, be it ethnic, racial or socio-economic, can also become not just lawyers, doctors and politicians, but artists, dancers, writers, poets and dreamers, as well, then they have no control over their own story and, eventually, over their own destinies and imagination. Other people then will control your dreams. Art, to him, was a powerful tool in the arsenal of a people, of a culture and of their future.

When you go to see the show, you will see how a generation of (mostly) Nisei and other ethnic local artists reacted to and contributed to one of the most influential art movements of the 20th century. They were in the thick of it even though they may have had humble beginnings in a prewar territory, an island “backwater.” They scaled the heights in art as others of their generation broke barriers in business, white-collar professions and politics. Their contributions, too, are a worthy legacy of their generation.
To the memory of Keiji Kawakami, who pointed me in the right direction.