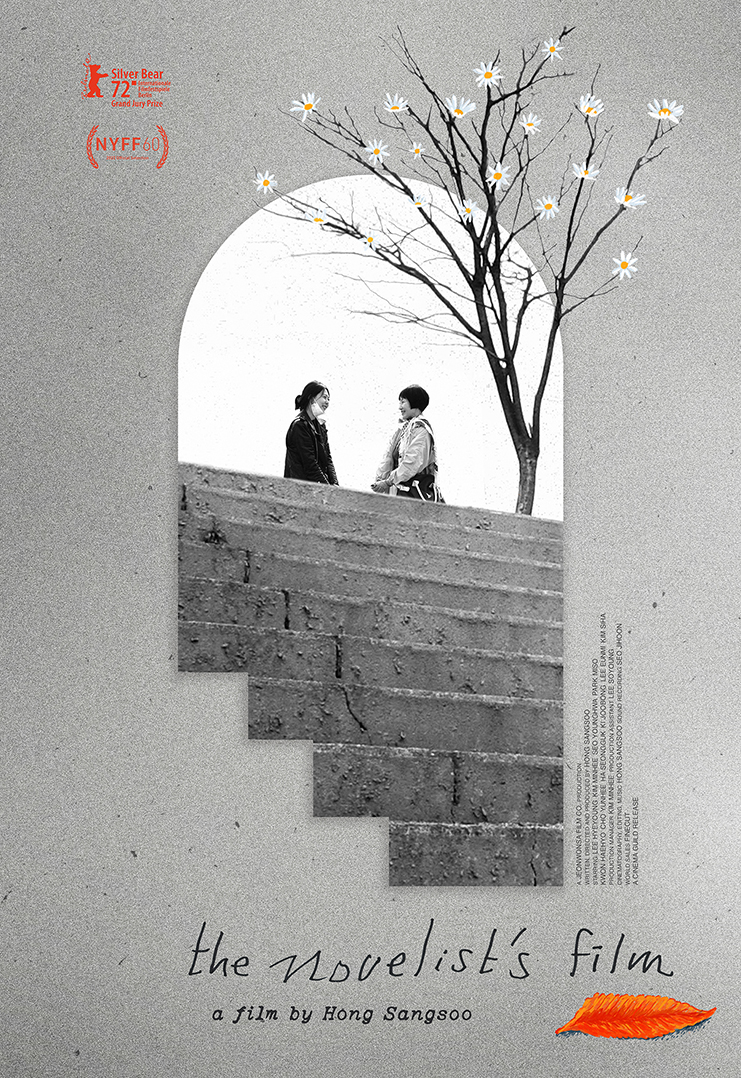 Prolific South Korean auteur Hong Sang-soo returns with The Novelist’s Film, a cheeky meditation on art and the creative process through the eyes of a cynical writer yearning for fresh inspiration. Winner of the Grand Jury Prize at this year’s Berlin Film Festival, this meta-feature is Hong’s most personal film to date and offers a suggestive glimpse into the filmmaker’s psyche.

Lee Hye-yeong stars as Junhee, a successful writer whose career has plateaued. Perhaps driven by loneliness or a longing for intellectual stimulation, Junhee sets out to reconnect with an old writer friend who now runs a small, independent bookshop outside of Seoul. At the friend’s suggestion, Junhee attempts some sightseeing that leads to chance encounters with a famous filmmaker, who deflects accountability for a failed attempt to adapt one of Junhee’s works, and a well-known actress, Kilsoo (Kim Min-hee), who is in a similar creative rut. The two women, despite being artists of different generations and mediums, discover a special kinship and rapport that lead them to agree to make a short film together.

Throughout a career spanning nearly three decades and nearly as many films in as many years, Hong’s approach to his craft has been well-documented. He tends to write out scenes the morning of a shoot, providing the actors – many of whom are frequent collaborators – with notes rather than a conventional script. Like others in his oeuvre, the substance of The Novelist’s Film feels like it exists somewhere between improv and the awkward messiness of real life. With the exception of the bookshop owner, Junhee’s meetings with the other characters really do seem random and her candor genuine. Is she so unfiltered due to age, or because she simply no longer cares what others think of her, or perhaps both?

In addition to writing and directing the film, Hong also serves as cinematographer and editor, utilizing long takes, and static shots in high-contrast black and white while eschewing closeups of the actors. It’s the sort of film that seems deceptively simple at face value yet, as he’s demonstrated time and again, a straightforward plot can bend and flex in unexpected ways under his guidance. An extended scene of Junhee, Kilsoo, a visiting poet, the bookshop owner and her assistant, all downing soju whilst discussing art and literature distills the films weightier themes into a handful of pointed, memorable lines.

Though perhaps too subtle for some viewers, overall The Novelist’s Film is a fun jaunt through Hong’s ever so off-kilter cinematic universe, exploring and questioning the dual roles of art and artist in society.

The Novelist’s Film screens nightly at 7:30pm from December 14 – 18, at the Northwest Film Forum in Seattle. In-person only. Visit nwfilmforum.org or call 206-329-2629 for further details and ticketing information.