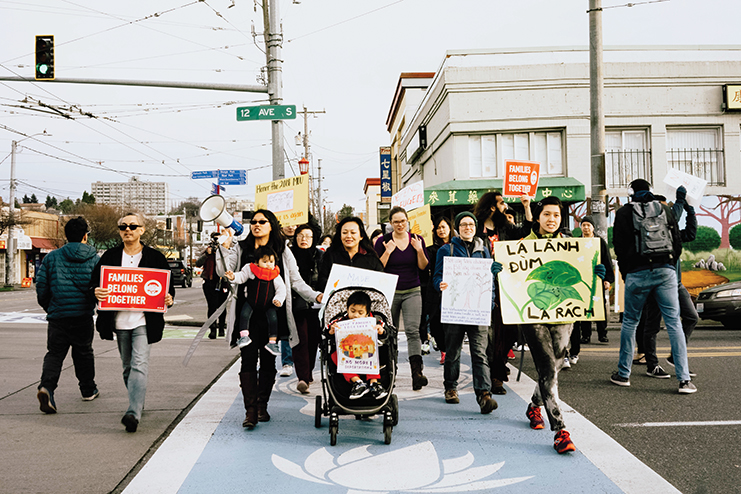 Over 100 people rallied at Hing Hay Park January 11 to oppose a new policy from the Trump administration that would allow thousands of Vietnamese refugees to be deported.

This could include 1,000 people in the Seattle area, said Kristopher Larsen, one of the organizers of the rally, though he said it’s difficult to get accurate numbers.

Vietnamese refugees who arrived in the U.S. before July 12, 1995, cannot be deported thanks to a repatriation agreement the U.S. and Vietnam signed in 2008 when the two countries re-established diplomatic relations.

The Trump administration wants to change this and renegotiate the agreement, allowing 8,500 people to be deported. This could include refugees who are undocumented or who have been convicted of a crime, no matter how minor.

Members of the Vietnamese, Cambodian and Lao communities spoke at the rally, including Rep. Joe Nguyen (D-Seattle) and Rep. My-Linh Thai (D-Bellevue), the two first Vietnamese members of the Washington state legislature. A representative from the Governor’s office also spoke.

Tung Nguyen, a Vietnamese refugee facing deportation also spoke. Nguyen served time in prison for a crime he committed when he was 16, was released early for good behavior, and was pardoned by California Governor Jerry Brown at the end of 2018. He now works as an advocate and help inmates re-enter society.

“The people the U.S. is currently targeting right now, yes, they have prior criminal convictions like me, but they learned their lesson,” Nguyen said. “They got out of prison, they moved on to become law abiding citizens. They are community members like every single one of us.”

Many Vietnamese refugees could face persecution from the Vietnamese government if they were to be deported, because many of them were allied with the South Vietnamese or U.S. governments or had parents who were, said Jessica Do, a Vietnamese American activist and U.S. student, at the rally. “To go back on this promise is to subject a community in diaspora, once again, to displacement. It is cruel and unjust,” she said.

Protecting refugees from deportation was a way of acknowledging the impacts of American military involvement in Vietnam, Do said. “We are here because you were there,” she said.

Toshiko Grace Hasegawa, executive director of the Washington State Commission on Asian and Pacific American Affairs, called the Trump administration’s plan “unthinkable,” and “the most recent iteration of a xenophobic attempt to target immigrants and refugees.”

My Linh Thai, Representative-elect for Washington’s 41st District and a refugee from Vietnam, said many refugees have post traumatic stress disorder, and are marginalized by society and their own communities. “These are the people who experienced trauma beyond our imagination,” she said. “Here we are once again, trying to traumatize them.”

After the rally, around 80 people marched to Little Saigon, chanting “Where is home? Home is here” and “Honor agreement.” A Seattle Police car followed along with the march.

The Cambodian and Lao communities, also affected by the fallout of the Vietnam war (including the Khmer Rouge killings), have also been experiencing the aggressive deportation efforts of the Trump administration.

Many Uch, a Cambodian community member at the march, has been fighting deportation for the past 22 years. “A lot of the Khmer folks that I know come from low-income neighborhoods and get caught up in the school to prison pipeline,” Uch said. “It was tough growing up – we’d get into trouble. Unfortunately, for most people when they get into trouble they don’t get deported, but for refugee communities, for immigrant communities, we get separated from our family.”

Nghia Bui was three years old when his parents fled the Vietnam War, among thousands of “boat people” who fled the violence by sea. He joined the march to support refugees and those affected by the policy. “I might not agree with some of their lifestyle, but I can understand the hardships that refugees encounter when they grow up,” he said of those affected who were convicted of crimes. Though Bui and his parents got citizenship, he knows many people who didn’t get the paperwork done, or lost it. “This is all paperwork, and people have been here all their lives. It’s just crazy.”

Larsen, one of the organizers of the rally who works with Formerly Incarcerated Group Healing Together (F.I.G.H.T.) to help incarcerated Asian and Pacific Islanders, was evacuated from Vietnam as an infant during Operation Babylift and adopted by an American family. While he had a good childhood, he experienced hardship and loss later in his life, and tried to end his life three times. “There were a lot of support services I didn’t have as a child, and so I didn’t know how to deal with a lot of things,” he said.

Larsen was convicted of kidnapping and served 10 and a half years in prison. His motive for the crime, he said, was to force police to kill him, as he couldn’t end his own life. In prison, Larsen found out there was a deportation order out for him, as his parents hadn’t successfully completed his citizenship. But he was protected by the 2008 memorandum of understanding between Vietnam and the U.S.

The Trump administration’s new policy would put Larsen at risk of detention and deportation, Larsen said, and he didn’t join the march to avoid the risk of arrest. Larsen is working with lawyers to have his case vacated and the deportation order lifted. The only country he knows is the U.S. – in fact, Vietnam does not consider him a citizen and has no documentation for him, since he was brought during Operation Babylift. “I’m kind of in this weird limbo state,” he said.

Organizers of the rally handed out petitions for people to sign urging the U.S. government to keep the repatriation agreement and not re-negotiate it. If the agreement is not renegotiated after January 22, it will automatically be extended for another three years.