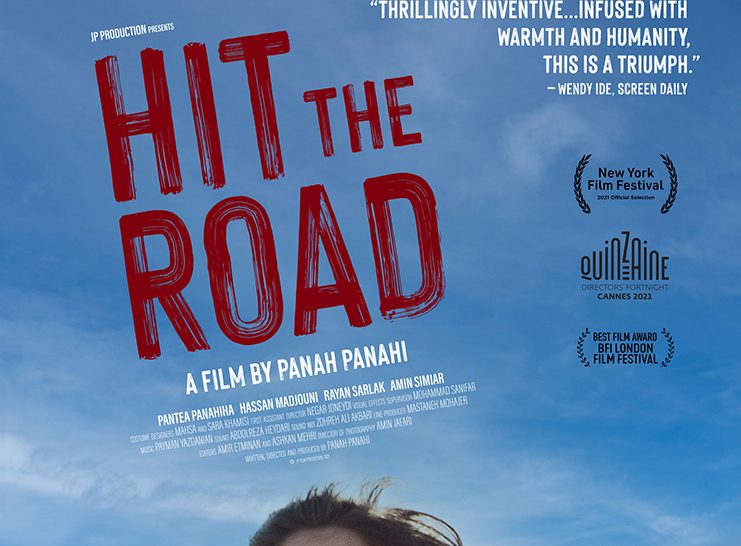 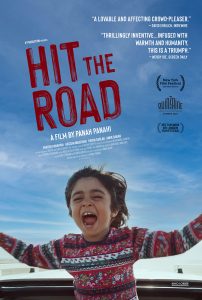 Hit the Road opens with a close-up of a young boy playing an imaginary keyboard drawn in ink on someone’s cast. As the scene continues, we see a sleeping middle-aged couple in an SUV that is pulled over on the side of a dusty highway. The man’s leg is in a cast and the little boy is amusing himself by prodding his father’s immobile leg. Another young man returns to the car having stepped away to relieve himself. He peers into the rear window of the SUV, grabs a bottle of water and relaxes against the hood of the SUV. The woman opens her eyes and asks, “Where are we?” The kid cheekily responds, “We’re dead,” and the mother smiles indulgently.

This everyday scene of tired travelers on a long road trip – the bored kid, the standard road trip question wondering where one is – captures the essence of the road trip experience. And within a few seconds, the young boy (performed brilliantly by Rayan Sarlak) steals the viewer’s heart. He’s impudent, witty, loveable, and annoying all at once.

The casual domestic scene, however, soon takes on ominous tones.

We see the family worrying about surveillance as they watch a car following them when they restart their journey; they care for a loveable dog, Jessy, that is seriously ill but is on the journey with them because they love the dog; and the dusty landscape contributes to the unease. As they try to shake off the surveillance, they pull into a roadside shop, and the driver following them stops to tell them their car is leaking gasoline.

We don’t know who our family is or very many details of their lives. There is no long exposition of background or any explanation for the trip. However, as the desultory conversation goes on, we learn that they have mortgaged their house to pay for bail for the older son, who is driving them, and seems to be in his early twenties (ably played by Amin Similar), and that this son will soon be leaving them. The mood with the adults is apprehensive and the child’s witty chatter breaks up the tensions.

As the family drives on, the landscape shifts to beautiful green mountainous country, and we understand that they are meeting with a smuggler who will help the older son cross the border into another country (presumably Turkey). The clandestine network, the fears of being followed by the police, and the buying of sheepskin to disguise the desperate immigrant all speak to a large underground economy dealing with such undercover migration.

The film is not about why the young man needs to leave or the logistics of the actual border crossing but about a loving family whose life is about to be overturned and about how they bravely and lovingly care for one another.

Pantea Panahiha who plays the mother conveys so much feeling with what she does not say; her frenetic energy (shot from a distance) as she runs back and forth to give her departing son warm clothing breaks your heart. She is every mother who has had to send a child into danger in an unknown country because that is the only way she can keep him alive.

The limping father (performed by Hassan Madjooni) who follows his son to his clandestine meeting with the smuggler and later lies under the stars with his younger son snuggled up to him spinning a tall tale about an interstellar journey exemplifies a father’s love. In the finale, the family tends to their furry family member, and the car turns back for the return journey of a diminished family. It is profoundly moving.

Panah Panahi, son of acclaimed director Jafar Panahi, knows how to make a lyrical film that draws the viewer in and keeps them enthralled. Powerful performances by the four main actors and particularly the loveable six-year-old make this film a one that should be on your watch list.

Hit the Road opens in Seattle on May 6 at SIFF Cinema Uptown.