Protest against the illegal incarceration of Japanese Americans during World War II took many forms, resulting in huge consequences for the individuals who bucked the system. A few took a legal route, such as Gordon Hirabayashi, Min Yasui, and Fred Korematsu, and they spent time in prisons along with incarceration in camps. In later life, they were celebrated as heroes and champions of democracy.

On the other hand, Hiroshi Kashiwagi’s stands brought down upon him some heavy penalties that harshly impacted the rest of his life, for his actions provoked hostility from within his own community. By answering no-no to the infamous “loyalty” questionnaire and later renouncing his American citizenship, Kashiwagi forever carried the stigma of the label of disloyalty.

These factors profoundly colored the life of this man and he has dealt with these ambiguities in words (plays, poems, writings), in speaking out about his experiences, and in pursuing a career in acting.

In Starting From Loomis, Kashiwagi’s latest book, he speaks about these matters, comments on his life, thinks deeply about the community he grew up in and of Japanese American life in those troubled times.

There is nothing extremely profound or of deep philosophical import in these stories, but these are heartfelt reminiscences of a complex life. The circumstances that confront a group may be similar, but each draws different conclusions about what to do.

Many Nisei went along with the flow and by keeping their heads low, and dodged the “slings and arrows” of outrageous fortune. Kashiwagi, always so thoughtful, chose to defy the authorities, and thus, his fate was cast for the rest of his life.

In my eyes, his resistance is every bit as heroic as that of Hirabayashi, Yasui, and Korematsu, but is still largely unrecognized as one by the community. But what makes these stories so poignant and evocative is that they describe a way of life that was typical for Japanese Americans before World War II, and of a culture that is dying out.

Such stories are precious and tie us to our past, and, to use a cliché, show us where we came from. His love of sushi, his going to funerals in his home town, his father’s general store, all such details bring alive a way of life that has mostly disappeared.

Our community suffered some terrible blows by being incarcerated. How one person, Kashiwagi, was affected and how he lived out his life are tales well worth preserving, studying, and savoring. 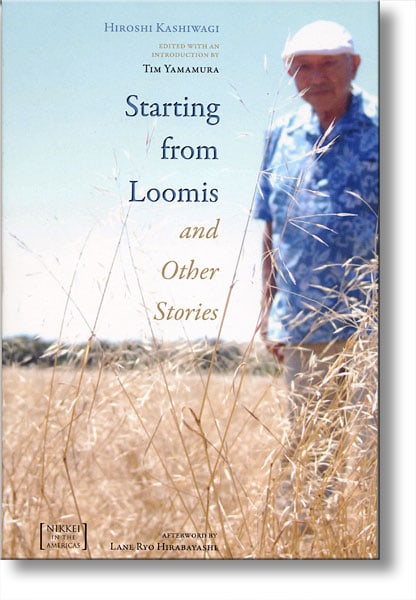 Starting From Loomis and Other Stories
Hiroshi Kashiwagi
172 pp. University Press of Colorado, 2013