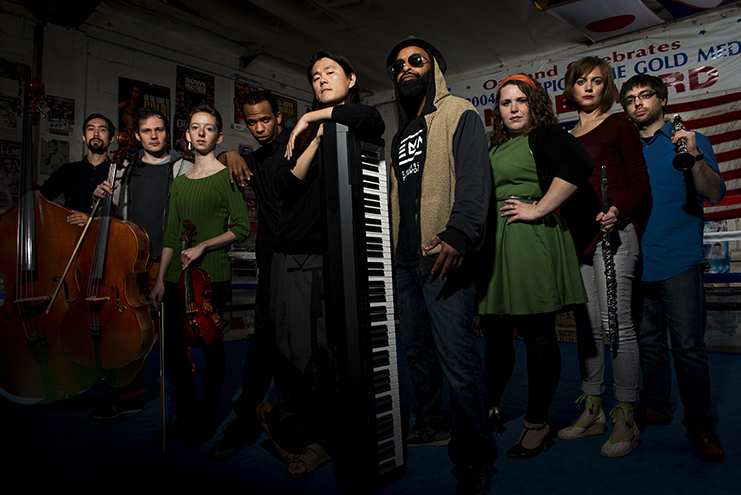 “Be free and courageous.” These are rare words during this COVID-19 pandemic, but composer and pianist JooWan Kim wants people to feel these sentiments, especially in regard to his Ensemble Mik Nawooj, a self-described Hip Hop Orchestra that is now in its 10th anniversary season with an online album release party that happened on March 25.

Ensemble Mik Nawooj (EMN) creates what Kim calls Metamusic, which he says is more than just combining Hip Hop and Classical genres in a mashup. “What we do follows a principle called Method Sampling, a way of sampling foreign rationales that are not native to your own system to generate a new system,” Kim said. “Once you introduce foreign elements in a system that these elements have no reference point on, you trigger a change.”

After completing a master’s degree at the San Francisco Conservatory of Music, Kim founded EMN in 2010 in order to explore his vision for authentic music. “I felt that I could offer a path which can make fellow practitioners of classical music and audiences more free in expressing themselves without the oppressive idea of the ‘right aesthetic’ or ‘haute’ culture,” Kim said.

Despite the constant innovation in many music genres, Kim reports encountering resistance to his explorations. “On the concert music side, people initially think it’s a novelty project until they find out how serious I am about it and get weirded out that the beloved and true aesthetic of established classical music is being corrupted,” he said. “On the hip-hop side, some people think that it’s not ‘real hip-hop’ and provide criticisms to us with all the trappings of not being ‘real.’”

But Kim has not been deterred during the past decade. “These are all legitimate concerns and we totally ignore them,” he said.

Nor has COVID-19 slowed Kim down. “We were extremely fortunate to continue working throughout the pandemic and lockdowns by getting two substantial commissions including a Broadway musical which required multiple recording sessions,” he said. “With the revenues of the commissions, we recorded a 10 track album including all the previously unreleased materials as well as three commissioned pieces from Yerba Buena Gardens Festival for their 20th anniversary.”

But first, on March 25th, they utilized an online format for their release party. “We pivoted our live concert program at Asian Art Museum to five accompanying music videos featuring the wonderful space and art works of the Museum and set up a virtual release party,” Kim said. “For the album, we have augmented our usual 10-piece group to a 22-piece chamber orchestra with winds, french horn, and a good amount of string sections, creating a much lush sound.”

To develop EMN’s new pieces, Kim relied on his memories of the repertoires rather than the precise scores. “It was interesting how some of them were already changed within me, or I don’t actually remember them correctly,” Kim said.  “Naturally, the process of deconstructions follows Method Sampling as well. It’s in part hip-hop sampling and in part motivic development from classical music.”

And in anticipation of a return to a more open world post-Covid, EMN also has a show lined up for February, 2022, in Tacoma. “It’s so weird that we’re talking about a show in a year, but I digress,” Kim said. “We’ll have had more time to sit on some of the new pieces so it’ll be extra dope, for sure! However, if you’d like to see us sooner, we’re going to Reno, NV, to perform at the Artown Festival in July, this year.” Details are on EMN’s website.