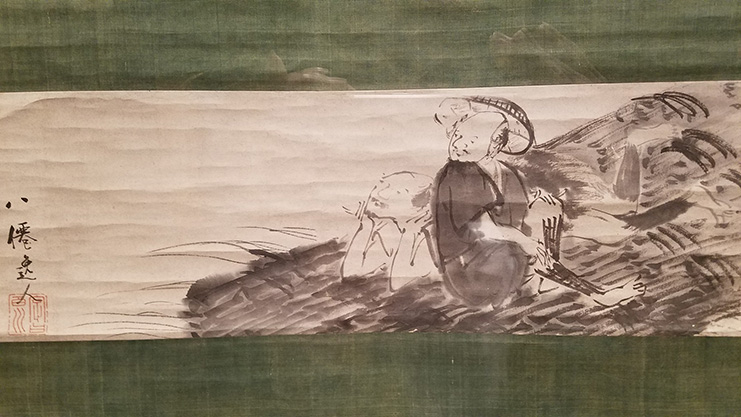 In 1603 the Tokugawa Shogunate had pacified the various feudal domains and turned to Chinese Confucian ideals to rule the land. This new interest in Chinese culture and philosophy also brought the importation of woodblock printed books, literature, aesthetics and all manner of material culture to Japan.

In Japan, Chinese literati painting is known as bunjinga and also known as Nanga Southern Painting. Nanga Painting became an obsession for Japanese artists and cultural elites, adding new forms of artistic expression to the visual arts. Literati painting was a new way of showing and sharing the artist’s knowledge of history, literature, poetry, calligraphy and art. The Nanga artists of Japan adopted these methods to further express their own thoughts and ideas. While Japan was officially closed to foreigners Chinese books, paintings, monks and some artists made the arduous journey and Chinese literati painting developed there with distinctly Japanese characteristics.

Hyakusen was a professional painter and was also accomplished in Japanese painting and poetry. His work in haiga combined painting and the 17 syllable haiku. Born in Nagoya, perhaps Chinese ancestry, he likely may have had access to books and paintings from China.

Represented with 12 paintings, two of them a pair of six panel folding screens, Hyakusen reveals himself to be a master of many styles. Most of his work is in the Nanga style. ‘ Recluse in a Mountain Landscape’ circa 1740 depicts a scholar dressed in Confucian robe and cap looking out at a sparse woods, executed in a sketchy dry brush technique. Another striking work is ‘Two Men in a Raft’ also circa 1740, this painting utilizes a long horizontal format and strong descriptive brush work is used for the raft and the two boatmen are depicted with verve and humanity.

The ‘Mountain Landscape’ was a previously unknown late painting by Hyakusen and an important discovery in the field of Nanga painting, and was a gift from the late Professor James Cahill. Over the years the folding screens were badly damaged and took two years to be conserved, remounted and repaired especially for this exhibition. The’ Mountain Landscape’ is acknowledged by Cahill to be a masterpiece by Hyakusen depicts a classical Chinese scene of intricate structures. Temples, palaces and rustic hermitages nestle among lush trees and verdant mountains. Layers of of ink wash and fine brush work on gold leaf reference the ink paintings of the late Ming and early Qing dynasties.

‘Hinges’ bring together the work of Hyakusen and his artist contemporaries and first and second generation Nanga artists. There are 34 hanging scrolls and folding screens in the exhibition giving a full account of Nanga painting from the eighteenth century to the late nineteenth century. Notable artists include the great Ike Taiga and Yosa Buson. The only woman artist is the accomplished Tokuyama Gyokuran (1725-1784) the wife of the famous Ike Taiga. Her landscape is a gentler version of her husband’s frenetic brush work.

Among the group of Nanga artists of Hyakusen’s circle one of the most talented is Gion Nankai (1677-1751) whose magnificent and massive ‘Landscape after Wang Meng’ approaches the Yuan dynasty master’s essence, and is a standout in the exhibition. Also Yanigisawa Kien (1704-1758) ‘Landscape in the Blue Green Manner’ a definitely Chinese inspired painting rich and dense, twisting rock formations and endless vistas evoke the restless energy of early Chinese landscape painting.

These days many museums and curators turn to the contemporary art of Asia to bring in the crowds. The BAMPFA and curator Julia White are to be commended for this look back to the past and this examination of Asian cross cultural exchange over two hundred years ago. Sakaki Hyakusen is not a household name not even in Japan. Unlike the great fifteenth century Japanese artist Sesshu he never went to China, but his study and enthusiasm for Chinese literati culture has impacted Japanese painters and calligraphers all the way to the present.