The start of a fresh new year always brings forth a clean slate ready to be filled with ambitious resolutions and countless adventures, big or small. For families with children in particular, they already have a great opportunity to plan something wondrous and exciting since Seattle’s annual Children’s Film Festival is just around the corner.

As usual, Northwest Film Forum has selected a number of films from around the world for this festival and will kick off the festivities at SIFF Cinema Egyptian (805 E. Pine St.) on Jan. 24 with a singalong to children’s classic “The Muppet Movie.” There will also be events that require registration, such as the Pancake Breakfast on Feb. 2.

Fans of Japanese animation will be happy to know that there is a special program of short films from the KINEKO International Film Festival in Tokyo, which will be shown on Jan. 27, 30 and Feb. 9. Films from Asia are not just limited to this program, as several Asian shorts and feature films are scattered throughout the other programs as well. Here are 8 in particular to look out for:

Chuskit
Chuskit is an inquisitive, imaginative girl living in a remote Himalayan village. With her brilliant brother Stobdan as a role model, she looks forward to the day she can start her educational adventures the following year. Her parents are delighted by her enthusiasm and support her zeal for learning. In contrast to her forward-thinking family, her grandfather is a staunch traditionalist who disapproves of the changes brought about by modern times.

During a trip to the city, Chuskit’s dreams are cut short as an accident turns her into a paraplegic. Three years later, we see Chuskit living in her room, looked after by her parents and grandfather. She is regularly visited by her two best friends, who regale her with stories from school. Stobdan wins awards at school, competes in science competitions, and brings home the things he creates for his sister.

As Chuskit watches everyone doing exciting things, she becomes frustrated. She starts to resent being stuck at home and yearns to go to school. With the help of her friends and family, Chuskit’s devotion inspires her village, particularly her stubborn grandfather, to help make her dreams of going to school a reality. This heartwarming and inspiring feel-good story about love of family and the strength of communities to move mountains will undoubtedly have you wiping away tears of happiness.

Chieri and Cherry
Chieri is a fanciful girl in the 6th grade visiting her grandmother for the first time since her father’s death six years prior. To cope with her father’s absence all these years, she has clung to a stuffed rabbit she found in a box during her father’s funeral that she had named Cherry. Together, they go on many adventures together, a fact her cousins find odd. She resents her mother, who, upon becoming the sole income provider of the family, has little time to spend with her and is subsequently ignorant about her school events and achievements.

As Chieri explores her grandmother’s home, she slowly unearths memories about the place, particularly that of Dondarabekko, a monster she fears that was created through her own imagination and whom she believes is the cause of her father’s death. She also gathers new friends in the form of a mouse and black cat. With Cherry and her newfound friends, she sets off on a mission to save an unborn pup, and in the end, faces her fears and battles Dondarabekko. This is a wonderful film to introduce or help children understand death and the loss of loved ones.

Mogu and Perol
Mogu loves to cook and makes mouthwatering dishes every day. He is often visited by a mooching friend named Perol who always conveniently appears just as he is about to eat. Although this inconveniences him, he realizes just how much Perol means to him after they have an argument and he stays out of Mogu’s life. This is a tale of an unlikely friendship that shows how even the most troublesome relationships can be of value to our lives.

Tough
Director Jennifer Zheng questions and reflects with her mother about her past and Zheng’s upbringing: The Cultural Revolution, bringing her up in a foreign country and her dual identity as a Chinese-British person are all topics touched in this short film. Although this is one family’s immigrant experience, it can arguably be seen as a shared experience for many immigrant families struggling to raise their children in a foreign land.

Genbanojo
Genbanojo is a legendary fox famed for his shape-shifting abilities. It is said that his greatest nemesis was a train, which he failed to destroy after transforming into a train himself. Humiliated, it is said Genbanojo and his minions withdrew from society, but a young girl yearning to bring to her grandmother the cherry blossoms she saw at a young age inadvertently stumbles upon the secret of three popular traveling performers. In exchange for her silence, the performers promise to grant her wish, regaining the confidence they once lost in the process. A wonderful tale to watch for those interested in myths, legends and traditional tales. 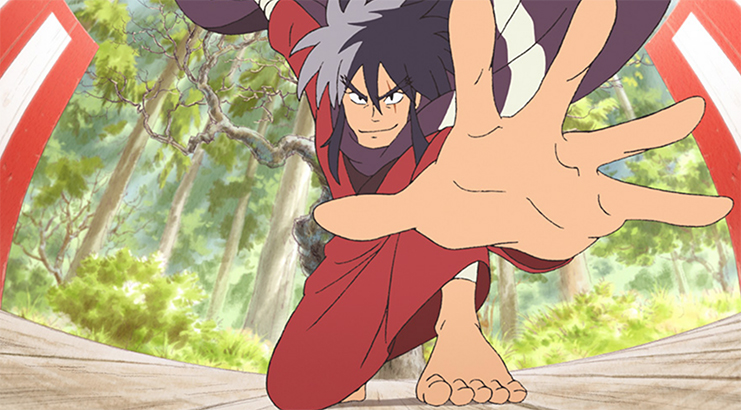 The Big Picture
Monty is a teenage boy who loves Bollywood films. After a mysterious visit from a big Bollywood legend, he starts questioning the roles society creates for men and women, young and old. As he examines the varying roles his family members occupy, he understands them better and develops better relationships with them.

Searching Skies
A teenage boy lacks the understanding and sensitivity required to appreciate the hospitality his uncle extends to a family of Syrian refugees on Christmas. Upset that he needs to accommodate to the needs of a Muslim family, he makes awkward and heartless remarks. It isn’t until the passing of a harmless moment that he realizes the impact of the crisis in Syria. A good introduction to children about refugee crises around the world.

Momo and Her Cat
This is the story about a girl named Momo who adopts a kitten she names Mew at a very young age. They grow up together and go through good and bad times, including the turbulence of adolescence and young adulthood. This is a sure crowd pleaser and will resonate with anyone who has experienced the close companionship of an animal.

For more information about programs and listings, visit www.nwfilmforum.org. Plan ahead and book tickets beforehand as spots will most likely run out soon.