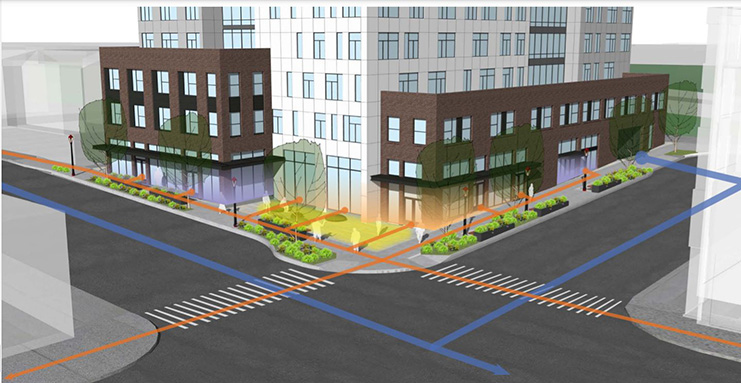 After a gap of roughly three years, developer Hotel Concepts and Studio 19 Architects presented a retooled proposal for a high-rise project on 8th and South Lane Street before the International Special Review District (ISRD) board on September 14.

During the briefing, conducted over video online, board members urged the developers to come back with design changes to better fit aesthetically into the surrounding neighborhood. They also echoed community concerns about impacts of traffic and construction on the nearby assisted living facility Legacy House.

The changes to the project did not satisfy several activists and community members, who wrote letters to the ISRD Board raising the alarm that the project would exacerbate gentrification, displacement and the affordability crisis. These issues are considered outside the ISRD board’s purview.

After the project was first proposed in 2015, it galvanized activists who formed the Chinatown International Coalition in response to an article co-founder Cynthia Brothers wrote about the project, titled “Will Grandma have a place in the new Chinatown-International District?”

“Every person in the CID will be impacted by this property,” said Carmen Hom, a member of the CID Coalition, during the public comment period. “Everyone in the CID feels the change that is happening to it, the threat of gentrification, displacement, rising rents.”

Unless the project commits to including affordable housing, units that include more than two bedrooms, and retail space for businesses owned by people of color, “this building will just be another emblem of gentrification,” said Hom.

Ian Munar, who works as planning, development and evaluation manager for International Community Health Services, expressed concern about affordable housing in the neighborhood in a letter to the board, writing that low-income community members, and staff and patients at ICHS, have trouble finding affordable family-sized housing close to their communities.

“Our communities risk being displaced and dispersed. Promising to include a few units in new developments isn’t enough, the new developments themselves must not be what that prices people out of entire neighborhoods,” he wrote.

Munar also expressed concern about the health impacts of construction, including noise, dust and pollution — on seniors living in ICHS’s Legacy House, an assisted living facility adjacent to the proposed project. Munar said the project, when complete, should not include bar or nightclub with late operating hours, which would disturb residents

Finally, Munar wrote that the Legacy House entrance on S. Lane Street should not be obstructed during construction, as it’s the entry way for seniors, staff, visitors and others to get to their work or homes, and for pickup and dropoff and access for delivery trucks.

Nora Chan, a former president of Seniors In Action, had a letter read into the public record representing seniors who live in the neighborhood. The letter praised the developer for making “significant positive changes to the building” in response to the community, including changing the use and height. “We support the inclusion of family size, housing, which is important to the fabric of the Chinatown International District community,” the letter added. “Adding ground level street lighting, seating and landscaping is important for overall neighborhood safety and walkability.”

Developer Hotel Concepts has helped build 24 hotels in Washington, Oregon and Hawaii. The updated project “will better address the needs of the neighborhood,” according to briefing materials presented to the board. It will involve demolishing two buildings on the site, building a driveway on S. Lane St., replacing some sidewalk and adding trees.

Board members said they did not need further information about demolition of the existing buildings on the site.

Board member Matt Chan questioned placing the entrance to the two levels of underground parking on S. Lane St. Even though the Seattle Department of Transportation prefers placing it there, Chan said it is problematic because of the amount of activity in the area. This includes people dropping off and picking up children at the Denise Louie Education Center, buses, access for Legacy House residents, and ambulances. “When emergency vehicles need to get in, and there’s a garbage truck blocking the entry, it complicates things when a lot of the emergency situations are time sensitive,” Chan said.

Board member Matt Fujimoto asked for an updated traffic circulation study, and Lizzy Baskerville requested a study to show what it would look like to have a garage on the northwest corner of the site.

While acknowledging it is outside ISRD purview, Chan said the developer should take seriously the community’s wish for more family-sized units in the neighborhood.

Walls responded that the building will include many two-bedroom units, and the developer will consider three-bedroom units.

Board members Russ Williams and Lizzy Baskerville said the smaller height of the project, down to 13 stories, is an improvement.

At the same time, board members said the design needed more work to better fit into the neighborhood.

Williams said the building will set the example for future projects in the area, and its design should raise the bar. Fujimoto encouraged the team to emulate the care and attention seen in buildings like the East Kong Yick Building, which was constructed in 1910 and houses the Wing Luke Museum. Chan said the design looked too generic, and encouraged the architects to design a building that felt like the CID, potentially blending new and old elements. “There should be something that really signifies a more updated, modern approach to the district.”

Because of the building’s size, two of the three schematic designs presented at the meeting tried to modulate the exterior design and break up the visual impact of the tall building. Most board members favored these options, which also included a podium on the north and south sides of the building.

Chan asked if the architects could include a statement in their proposal about how they would mitigate the environmental impacts of demolition and construction on the site, given that Legacy House residents already experience poor air quality living close to I-5.