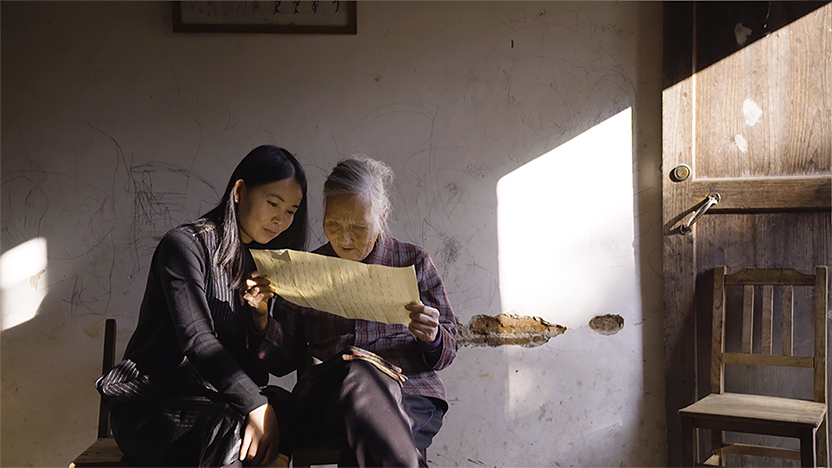 Hidden Letters from director Violet Du Feng examines the ancient, sororal language Nushu through the eyes of two young women in modern-day China trying to preserve it. By juxtaposing past and present, the film unflinchingly peels back the layers of sexism and internalized misogyny that have and continue to support the patriarchy. Equal parts fascinating and uncomfortable, Feng challenges viewers to look beyond the facade of contemporary gender equality and examine the still problematic roots of our culture and society.

While the film does not delve much into the early beginnings and evolution of the language, suffice it to say that Nushu was born out of a long history of physical (foot binding) and intellectual (being forbidden to read and write) oppression of women in China. Through this secret language of sisterhood, women exchanged letters, fans and handkerchiefs adorned with elegant, slanting script that only they could understand. Few original artifacts remain, though, as most women took their clandestine correspondence to the grave. Since Nushu’s “discovery” in the early 1980s by the mainstream, a new generation has emerged that is dedicated to preventing the language’s erasure from history –  a fate opposite that of the women who originated it.

In Pumei, located along the Yangtze River in Jiangsu province, Hu Xin works as a guide at the Nushu museum. As an ‘inheritor’ of the language, she is renowned nationally and internationally for her expertise. She finds solace in studying the rare primary sources, practicing calligraphy, and learning from the few remaining elders who used Nushu as a means to communicate with their friends, like ‘master’ He Yanxin.

Nushu poetry from the historical record convey themes of pain, suffering and isolation, providing a rare but bleak glimpse into women’s inner lives. For women like He, who weren’t even allowed to look men – including their own husbands – in the face, Nushu provided a crucial outlet. (“Nushu is mostly about misery,” she says wryly). But, of course, women feeling dissatisfied with their lot in life is not limited to history. In today’s world, where women can read, write and work, the pressures and expectations placed on women are higher. The circumstances may differ from those throughout history, but the feelings are the same. This is where Hidden Letters does its best work: in highlighting the discrepancies that persist to the present day.

Hu reveals that she was in an abusive marriage and, despite her achievements, still feels like a failure for being divorced and childless. The film parallels her story with Simu’s, another young inheritor and music teacher trying to practice her art while surviving in cosmopolitan Shanghai. Simu is engaged when she is first introduced, and the film documents the couple’s first visit together to his hometown during which he casually lays out his expectations for her to take care of both his parents and hers, work, and pump out babies (specifically boys). Later, during a casual hangout at Simu’s apartment, one of her friend’s confesses regret over getting married, while another tearfully mourns her choice to give up her career to be the main caregiver for her children. It is unsurprising that women like Hu and Simu (independent, inquisitive and intellectual) feel so connected to Nushu; the undertones of yearning and lack of fulfillment of generations past surely resonate with them.

Nearly all of the men featured in the film who open their mouths to speak – about anything, really, be it Nushu, family or marriage – are so tone-deaf that it seems almost a parody. The sheer amount of mansplaining, objectification of women, and commoditization of Nushu as a marketing gimmick in pursuit of profit that the film captures is truly horrific. From footage of male visitors to the Nushu museum badgering the female guides to the male executives pondering how they can spin the language to sell goods from potatoes to cellphones to sex toys, the film seems to beg the question of how, in a fast-moving, profit-driven world, can one one protect something like Nushu without corrupting it? Is that even possible?

Though lighter on facts and history and less structured than a conventional documentary, the power of Hidden Letters lies in its compelling subjects, Hu and Simu, and delightfully incriminating candid moments that are more impactful than any statistic. It delivers the warning that there should be no self-congratulatory back patting for how far we’ve come in “solving” gender inequality. The film consistently shows just how deeply ingrained the toxic notions that fuel sexism and misogyny are within the collective consciousness, with the result that hundreds, thousands of years later, women are still oppressed in many ways. But rather than wallow in it, Hidden Letters feels like a call for us to do better and be better, not for our own sake but for future generations of girls and women to come.