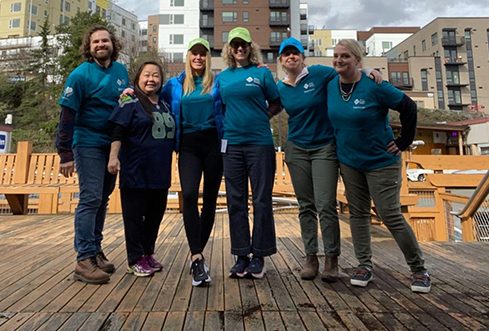 Helping Link, a non-profit Vietnamese community organization, has two months to relocate from their offices in Little Saigon, as they’ve continue to take part in organized clean-up days in Little Saigon since the beginning of 2022.

Helping Link has partnered with organizations such as Friends of Little Saigon, Puget Sound Energy Community Engagement, and PeaceTrees Vietnam to work to revitalize Little Saigon through the ongoing clean-ups, which recently brought out Mayor Bruce Harrell to join volunteers in the effort.

“You can walk on the sidewalk, you know,” Helping Link executive director Minh-Duc Nguyen said. “It’s 100 times better than before.”

Before the clean-up took place, Nguyen and Hao Duong, board president of Helping Link, have both described having seen drug use and littered streets. And they say Helping Link headquarters in Little Saigon was broken into and robbed three times in the past year.

Pho Bac Sup Shop, a popular restaurant up the street on Jackson from Helping Link, began using their Instagram account to document to their 28,000+ followers what the restaurant deals with on a daily basis Yenvy Pham, co-owner of Pho Bac Sup Soup, began doing so after dealing with a hostile individual, hearing three shots fired within close range of the restaurant, and witnessing a man being robbed in the area within the span of two days.

But, the clean-ups created a safer environment for Pho Bac Sup Soup, according to Pham.

“Most importantly is that my staff feels more safe and customers have expressed that they feel more safe on Jackson. It isn’t over though,” said Pham.

Since clean-ups have taken place, encampments near the plaza where Pho Bac Sup Soup is located have now moved two blocks down from 12th Avenue South, according to Pham.

As residents and businesses work for a safer neighborhood, Little Saigon businesses, organizations and residents still face the threat of displacement from ongoing housing development projects.

Representative Sharon Tomiko Santos (D-37) has represented the Chinatown-International District and Little Saigon for over 20 years. She believes that for real change to happen in a neighborhood like Little Saigon there needs to be a balance in which Little Saigon’s historical and culturally relevant businesses and organizations can prosper with the economical development being brought into Seattle through these housing projects.

“To me, the real issue is benign neglect, and is no better a public policy than a deliberate relocation of a group of people,” said Santos.

Santos maintains the notion that the City of Seattle’s previous years of neglect when it comes to listening to community members is what created the current public and economic safety obstacles that Little Saigon currently faces. Santos hopes to create a state agency that would support businesses, residents, and property owners in the CIB and Pioneer Square which would oversee effective growth management within these two areas.

“That’s why it’s important to be able to sustain and support organizations like Helping Link, Friends of Little Saigon, Interim Community Development Association and the International Community Health Services,” said Santos, “We need to be able to keep those organizations viable, so that our neighborhood, our district can remain viable.”

Developers have had a growing interest in Seattle’s CID neighborhood with an opportunity to create apartments with high rent prices but abandoning the community that built the Chinatown-International District.

“Development is inevitable and necessary. People just need to commit, have some skin in the game, and put in the work if they want to preserve and enhance culture,” said Pham.

10 to 15 percent of households in the CID are 80 percent below the area’s median income, according to the Seattle 2035 Growth and Equity report.

Since 2019, 4,500 units are currently in the permit process or are under construction. 1,240 units from that 4,500 will provide affordable housing options for potential tenants, according to The Urbanist. However, 3,260 units will be applied under the high rent prices of Seattle with an average price of $2,774.

These prices are also reflective of rent prices for places of business, said Duong.

“There are too many external forces that are pushing developers to consider the area and want to grow the area, but it’s going to grow in a way that probably will not be able to maintain the culture,” said Duong.

Nguyen and Duong said that development firms have reached out to them with 15-minute presentations but haven’t had time to have a genuine conversation about Helping Link’s future.

Seattle City Councilmember Tammy Morales hopes to overcome this barrier with an unofficial proposal including land-use policies or city incentives which could allow for affordable retail spaces for small businesses within the new developments.

Councilmember Morales also explained that the Comprehensive Plan heavily emphasizes the importance of seeking community voices for their development process. The 20-year plan revaluates the quality and quantity of housing, jobs, transportation, and public spaces within the city limits. At the time, the City Council is at the beginning stages of connecting with communities within Seattle. But Morales understands that with these plans in action that community members within the CID may be skeptical about trusting the City Council because of past inactions.

“It’s really a chance for community members to let us know what they want to see and what they don’t want to see,” said Morales.

In the meantime, community members within the CID have offered their support to Helping Link in their plans of relocating. Real estate professionals and agencies within the community have given them advice, easing the pressure on Helping Link’s current search for a new home.

“We definitely prefer to stay in Little Saigon,” said Nguyen. “We want to continue to keep the culture of Little Saigon and community as well.”