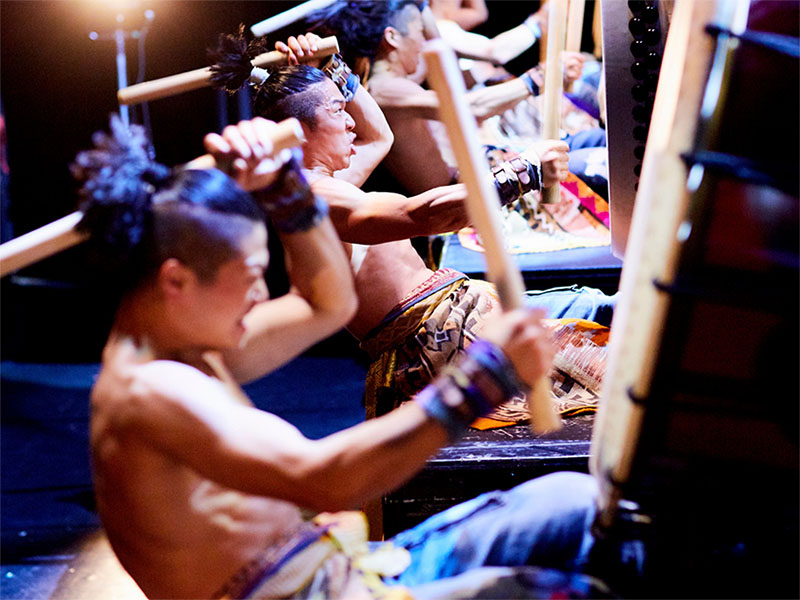 Yamato Drummers are celebrating their 30th anniversary, having been founded in 1993 in Japan’s Nara Prefecture. Yamato typically tours globally at least half of each year, and this month, the troupe comes to Seattle on February 16 at the Moore Theatre.
After canceling a performance scheduled at the Moore almost exactly a year ago, in 2022,

Yamato Drummers now bring their drums large and small to the same stage. “It’s been four years since our last U.S. tour!” said Artistic Director Masa Ogawa. “We are proud to present our newest show, entitled Hinotori – The Wings of Phoenix.”

Ogawa asserts that wings are the icon of energy. “Our wings are already in our souls,” he said. “We want to use these wings to fly away from difficulties into the future.”

To do this, Yamato Drummers will be foregrounding the wadaiko, a Japanese taiko drum made from a centuries-old tree. Yamato uses three kinds of taiko drums in performance: the heavy Miya-Daiko, which is made from one whole tree rather than multiple pieces; the lighter Okedo-Daiko, which is constructed from several wood pieces like a barrel; and the small Shime-Daiko, with its tight skin bound by a rope.

There will be thirty drums onstage. “The sound from five big drums will be a big ball of sound, reaching your soul directly through the holes in your skin and enveloping you in its deep sound waves,” Ogawa said. “If you already know Yamato, you can already feel it. If you have not yet come to feel Yamato, please come and feel it.”

Just as the word Yamato means Japan, Ogawa asserts that the sound of taiko drums is the sound of Japan itself. “We the members of Yamato believe in the unique value of Taiko,” Ogawa notes on the Yamato Drummers website. “We are committed to preserving its traditions and exploring new possibilities for this majestic instrument.”

In an earlier interview with Picture This Post, Ogawa recounts the story of how his mother found an old taiko drum in the storage area of a local shrine and persuaded Ogawa to use it. Ogawa wrote a song, which he performed with his brother and some friends, and word spread. People joined in, began practicing together, and developed the stamina to play this challenging instrument for long stretches of time. This entails not only drumming practice, but also long-distance running and lengthy weight-training.

The Yamato troupe currently features fifteen members, almost equally divided between men and women, which Ogawa admits differs from taiko drumming tradition. While most command drums throughout the performance, two of the performers also provide accompaniment on other traditional wind and string instruments, such as the Shamisen Japanese guitar, Sinobue Japanese bamboo flute, and Koto, a 13-string wooden harp.

The troupe aims to develop new performances organically. “At first we are recognizing that the most important thing for Yamato is human energy, and we believe it is coming from the heartbeat,” Ogawa described. “We are always using Taiko drums and trying to create original songs which can express the energy of this heartbeat.”

Ogawa first composes each song, and then shares the music with the drummers. “The written song on the score will be changed by each drummer’s character,” he said. “Drummers are putting their thoughts and spirit into each note.”

Together, they explore how to synchronize each musician’s part of each piece. “We also open the eyes of the heart to find a sort of synchronicity with other drummers,” Ogawa added. “Our final purpose is to connect to the heartbeat of the audience.”

Collaboration is the watchword. “Yamato’s performances and songs are never completed,” Ogawa enthused. “Yamato continues to be created by the people who gather to our sound.”

Yamato Drummers have performed over four thousand times for the public, and Ogawa’s goals are not modest. “I hope to be able to enfold people into the big vibration of the Taiko drum,” he had previously told Picture This Post. “I hope the audience heartbeat will synchronize with our beat. Then I hope people will be drawn into the circle. Our mission is to make people energetic and to make them one.”

Following the Covid-19 pandemic, this desire to perform live is now even stronger. “We have had lots of practice time and no opportunity to perform,” Ogawa said. “Our energy has been compressed, and we will explore and explode it on the stage.”

In addition to worldwide performances by the professional Yamato troupe, Yamato Drummers also runs a Taiko school in the Netherlands. “Our goal is to create ever more opportunities for the boom of Taiko to resound worldwide,” Ogawa said.

Ultimately, Yamato is about community. “Yamato can be your energy,” Ogawa encouraged. “And we expect to get your energy into our performance!”