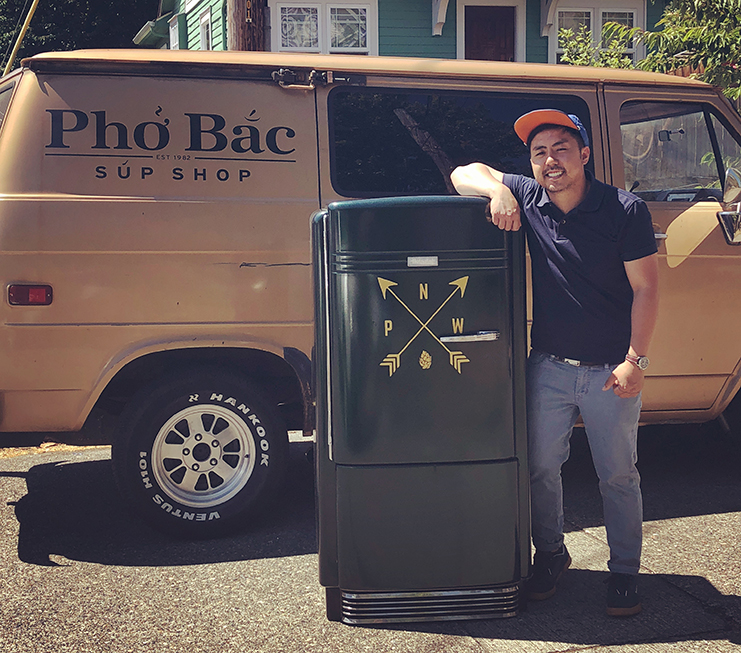 The City of Seattle declared April 21 Khoa Pham Day, in honor of his work as a small business owner, activist and community leader dedicated to caring for Little Saigon and beyond.

Pham passed away at the end of March of a heart attack, said his sister Yenvy Pham. He was 35 years old.

After he graduated from college around 2008, Pham helped his family manage the Pho Bac restaurant business. “Khoa served as the chief financial officer of the Pho Bac Cooperation and was instrumental in the growth of the business in the past 13 years,” wrote Pham’s family in a tribute for his memorial service.

Pham’s family and friends remember him as a passionate advocate for the neighborhood, its people and businesses. A person who put others first, and a warm presence who loved bringing people together.

Before he passed away, Khoa and Yenvy wanted to create a nonprofit hub for small businesses called the “Rainier Corral.” It would be built on a property owned by their parents in the Rainier Valley, and it would help cultivate entrepreneurs curious to try out a small business idea, but who didn’t have a lot of financial resources. It would provide kitchens and cheap stalls, similar to food hubs in Portland. Khoa was working on conceptual drawings of the project before he passed away.

Plans for “Rainier Corral” will continue, Yenvy said. She hopes it can be finished in the next two years. 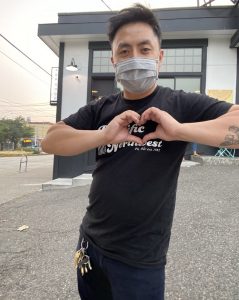 Khoa was passionate about helping make Little Saigon a more vibrant neighborhood and destination for the community, Yenvy said.

“I think he really wanted to showcase and boost up Little Saigon so that people can see that this is a great neighborhood to open up a business,” said Quynh Pham (no relation to Khoa), executive director of Friends of Little Saigon. “He saw so much opportunity here, but kind of the street level challenges we had, it was hard to get things up and going.”

Quynh met Khoa when he showed up to listen and meet people at a neighborhood public safety meeting she organized.

While Khoa believed in the value of nonprofit work, he had the mindset of a business owner, said Pham. He was full of entrepreneurial ideas, and wanted to get projects accomplished quickly.

Friends of Little Saigon works closely with business owners in the neighborhood, and Khoa helped her better understand how these businesses function and what they need in support, Pham said.

Pham remembers Khoa as a light-hearted person who could joke through challenging times. “Even when we were going through something in the neighborhood, he made light of it, just because we know that some of the issues we’re dealing with are so complicated or tough to deal with,” she said.

Khoa gave back in many ways — volunteering for nonprofits and buying neighborhood swag to champion the community, Pham said. “Just doing small things that I don’t think we all realized that he was doing that really brought us together, and made it really hard when he was gone,” said Pham. “He was just a very happy presence.”

Pham made a point of buying and wearing T-shirts from neighborhood businesses and events, said Tuyen Than, co-owner of Drag & Drop Creative. “He saw himself as like a walking billboard.”

Than met Khoa through her partner Ryan Catabay. They became friends through socializing in the neighborhood.

Pham was always out in the neighborhood doing things and spending time with people, said Than, with his pit bull rescue, Pinky, by his side. It was a great way to meet people in the neighborhood. “It was just really easy to talk to him because who doesn’t trust a guy with a dog?”

Than and Catabay bonded with Pham over the excitement of building out their business space. Pham was building out a new space at Pho Bac at the same time. Pham would come by the Drag and Drop office to print, even though he had his own printer and home office. “He just liked being around us, and we just loved being around him, too,” said Than.

“He was a really humble guy who never really talked about himself too much,” said Than. “He always asked other people questions, and he loved, loved love hearing other people’s stories.”

He made a point of introducing himself to every elder in the CID, and learning their stories, Than said. “He loved people. He honestly put people above himself sometimes,” said Than. “And his love language was gift giving. He always loved to give gifts and he was good at it.”

“He would always bring presents and gifts for all the businesses in Chinatown and welcome them into the neighborhood,” said Catabay.

And if a restaurant was struggling, “he would get everybody to go over there,” Catabay said.

Yen Ma, co-owner and bar manager at Gan Bei, met Khoa through a mutual friend. They quickly became friends. Pham would talk about his family, the business, and ambitions for future projects. “I think he saw similarity between our story and his family story,” Ma said. Both were part of family businesses, where parents and siblings also acted as co-workers. Khoa introduced her to his sisters, who she befriended as well.

“He was very much an advocate, ambassador for Chinatown,” said Ma.

They talked about the need to preserve culture and unique recipes in the neighborhood. “These really popular items like clay pot rice. Just food that, if people like me and Khoa don’t preserve this recipe and introduce it to the next generation, the culture of this type of food is going to die out.”

Every time Ma saw him, Pham was bringing a new person to her bar, spreading the word that it was a cool spot and gathering place for neighborhood people.

“He had a very nurturing nature about him. He cared about dogs a lot, he cared about people a lot,” Ma said. “He just spared nothing. He was very giving. His heart was constantly thinking of others.”

Melissa Miranda, chef and owner of Musang restaurant in Beacon Hill, got to know Pham at events in the CID, and they became close friends in the year and a half before he passed away.

Pham helped her open her restaurant, initially advising on the financial side of things. “I just remember meeting with him and him showing up and being like, ‘I believe in you, I believe in your vision,’” Miranda said. “He always saw people’s potential and it was always his dream to find ways to help.”

Pham regularly helped out restaurants that had been passed down across generations, helping them spruce up their design and presence, Miranda said. “He was very knowledgeable about a lot of things, from food to politics to aesthetics to design. And those were all things that he would love to help his friends with.”

Pham in turn was inspired by how community-driven Musang was. Pham often talked about the connections between Vietnamese and Filipino communities, and how he wanted to help them work together, Miranda said.

“Khoa has a following. There are folks in the ID who just love him. And he brought them together,” said Miranda.

“There are people that I’ve become friends with who are incredible people, and I think that’s really at the end of the day what Khoa wanted, to connect people from different backgrounds, make sure people had a great time, make sure people were uplifted and heard,” Miranda continued. “And I think a lot of it comes from his family.”

“He loved people. He loved seeing them do what they loved,” said Pham’s sister Yenvy. “He loved creating things. He loved when people created things. He wanted to inspire people.”