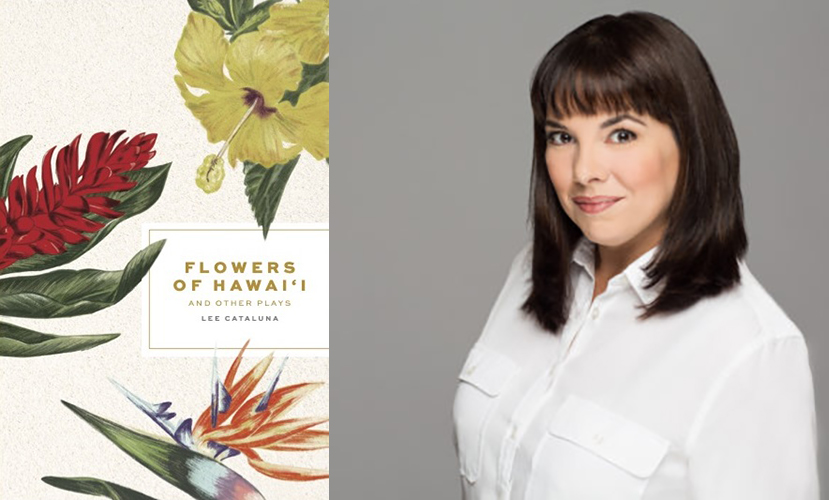 Hawai’i-based playwright, journalist, and author Lee Cataluna is now sharing her work more widely:  her collection Flowers of Hawai’i and Other Plays is Issue #121 of Bamboo Ridge, Journal of Hawai’i Literature and Arts, and the anthology includes four of her plays, Flowers of Hawai’i, Aloha Attire, The Great Kaua’i Train Robbery, and Uncle’s Regularly Scheduled Garage Party is Cancelled Tonight.

All four plays share a taste of culture or history in Hawaii.  “Bamboo Ridge was interested in the play Flowers of Hawai’i, which is about a large, diverse, dysfunctional family that manages to still hold on to love,” Cataluna said. “I picked the other three plays because they’re also set in Hawai’i and explore that idea of messy, imperfect, durable family love.”

Aloha Attire builds on the characters in Flowers of Hawai’i, focusing on pieces of attire special to each character, while Uncle’s Regularly Scheduled Garage Party is Cancelled Tonight blurs the lines between actor and audience with pre-show mingling to capture the feeling of celebratory life in Hawai’i.  The Great Kaua’i Train Robbery, however, goes in a different direction, back in time, inspired by a photograph of Cataluna’s great uncle, and culminating in a tragic ending to this historical drama.

For Cataluna, the decision to publish with Bamboo Ridge was a natural one. “I’ve been friends with the folks from Bamboo Ridge for a long time now and we’ve worked together on other projects,” she said. “Juliet Kono Lee approached me about publishing an anthology of some of my plays a couple years ago.”

John Wat served as the editor for Cataluna’s collection.  “John is a brilliant director, actor and teacher and working with him is a privilege,” Cataluna said. “He’s a lovely, generous human being.”

But Cataluna’s link to Bamboo Ridge goes back even farther, to her childhood years.  “The first book I read from Bamboo Ridge belonged to my mom,” she recalled.  “I probably read it when I was in 9th grade, and it was foundational for me as a writer.”

Cataluna’s mother enjoyed literature about Hawai’i.  “It was the first literature I read about the place where I grew up,” Cataluna shared. “Before that, literature seemed like something only white people from faraway places could write.”

There was also a dearth of theatre available to Cataluna during her grade school years.  “My earliest memory of seeing a live theatrical performance was in the Ka’u gymnasium when I was in first grade,” she remembered. “The high school students did a performance of Poe’s The Tell-tale Heart and I thought it was the scariest, coolest, most enthralling thing ever.”

For Cataluna, it was magical.  “It wasn’t just teenagers and a cardboard set on the gym floor,” she said. “I was so caught up in the story it seemed real.”

So it felt natural for Cataluna to pursue writing.  “I come from a family of storytellers,” she said. “I have many memories of listening to elders tell amazing episodes of their lives or legends of the land around us.”

She believes stories are vital to our lives.  “I’m always trying to recreate that feeling of being swept up in a story and connected to the other hearts in the story circle,” she said. “I know I need stories to make sense of things, to find comfort, to be inspired.”

Because of that, Cataluna is grateful that she can earn her living by writing, but also admits that it can be difficult.  “The bigger challenge for me is balancing a writing life with being a mom,” she said. “I’ve written many, many pages while sitting in my car in the parking lot outside the school waiting for my kid to finish whatever he was doing, or while cooking dinner with one hand.”

Now, with the publication of Flowers of Hawai’i and Other Plays, Cataluna hopes that her stories extend their range, into the classroom and beyond.  “Publishing plays makes the stories more readily available for study and analysis,” she said. “I hope these plays find their way into cool, unexpected places, and I hope the material speaks to readers in a valuable way.”

In particular, Cataluna values her connections to Seattle and Washington state, and hopes this anthology will continue that outreach.  “My children’s book Ordinary Ohana has been promoted by the Seattle Public Library, for which I am extremely grateful,” she said.  “The Ina Maka Family Program also posted a video of families reading my book out loud, which is the sweetest thing ever.”

She has also shared her work with adults here locally.  “I believe my book Folks You Meet in Longs was taught in a class at University of Washington,” she said.  “A theatrical production in Washington is definitely on my list of big goals.”

Cataluna has a lot of other specific dreams for her anthology, too.  “I hope actors use the monologues for auditions, and that they get cast!” she said. “I hope high school speech team kids use the scenes in competition. I hope the plays grow legs and wings and find their own vibrant lives in the world.”