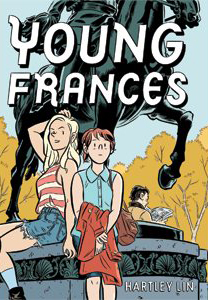 Hartley Lin is a Canadian cartoonist. With Young Frances, Lin makes his debut as a graphic novelist. Previous to this novel, Lin published cartoons under the pen name “Ethan Rilly.”

As we approach the story, we find Lin’s main character, the law clerk Frances Scarland, in an existential crisis. Questions swirl about Frances taking opportunities to moving upward in the fictional law firm. In the first several pages, she is promoted up to the bankruptcy division of the firm. We may say that in some way the novel deals with “moral bankruptcy” about the fast dealings in corporate law. Decisions are made to finagle motions in court at the last minute while tossing the case to a woman junior associate who later gets fired. Pressure is on to bill hours on target.

In another major theme, Lin examines the way the law firm mistreats their employees, the life blood to yield the firm’s success even under these circumstances.

Do you believe in the doldrums of corporate life? Lin may use this novel as a vehicle to expose the dynamics of an underworld that is the hierarchical life of the firm. The dynamics may be the constant low morale including the lack of sleep in Frances’ lifestyle endemic to this world. The villainous character getting the brunt of Lin’s criticism is the head of the bankruptcy division, Marcel Castonguay, of which Lin draws the picture of a buffoon.

Quite opposite to Frances is her roommate and best friend, Vickie. Vickie, a stage actress, stands poised to land her first TV role. Vickie’s wild nights pass by in a blur. Sometimes she shows up in the home she shares with Frances in the mornings, hungover. But Vickie brings jokes about Hamlet and shimmering performance of Chekov’s “The Seagull” into this over-drive work world of her roommate. And Lin alludes to many perspectives. Frances may ignore the ills of her job. She and Vickie like to quote Hamlet: “I could be bounded in a nutshell and count myself king of infinite space/were it not that I have bad dreams.”

Lin builds his characters with these literary mentions from David Mamet’s play Glengarry Glen Ross to another example, a picture frame of Frances lying down holding a volume of Alice Munro’s short stories.

Frances is young. We get to see how in young life, we make career choices. What we see is Lin’s humor, a humor that goes beyond Castonguay’s subterranean control and take-over of the firm in the end of the story but about how Frances’ generation comports themselves to be happy for a life that is vibrant and encouraging. This may be a story book to read about the first job you land right after college.

Stolen and scrapped, Seattle’s Arboretum gates are back

Local luminaries light up the night at Legendary Children, a QTBIPOC celebration