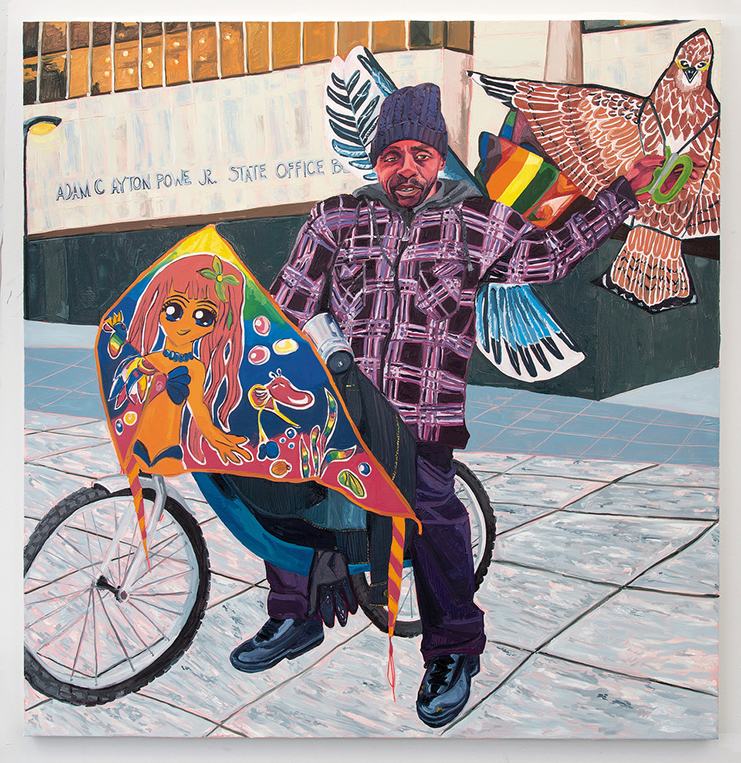 Retrospective exhibitions usually focus on a single artist. Works that span a career are brought together to offer perspective on the artist’s life and work. A retrospective of a museum is rare and more complex. The curators who assembled the museum’s collection over the years, and the artworks exhibited, represent multiple viewpoints and a variety of historical and personal influences. Black Refractions: Highlights from The Studio Museum in Harlem, currently on view at the Frye Art Museum, is a portrait of an institution.

Black Refractions is a kind of mid-career retrospective. The Studio Museum was founded in 1968, a period of social and political protests against the oppression of Black people. Created as a venue for Black artists and curators who were excluded from mainstream museums, it has a singular mission: to exhibit, support and promote the work of artists of African descent. Today, its collection numbers over 2,500 pieces by some 700 artists in media ranging from painting, sculpture and photography to video and installation. Now an established and respected institution, the museum is in the midst of a major expansion: a new building on its original site on West 125th Street in the heart of Harlem, designed by Ghanaian-British architect David Adjaye, who also designed the National Museum of African American History and Culture in Washington D.C. While it is closed for construction, the Studio Museum is touring Black Refractions, an exhibition of work from its permanent collection, to six North American museums over two years.

Connie Choi, Associate Curator of the Permanent Collection at the Studio Museum believes the work in Black Refractions will always be relevant. The show opened a year before the COVID pandemic began. Several months into the pandemic, George Floyd’s murder ignited a national reckoning on the oppression of African Americans. The civil rights issues that drove the Studio Museum’s founders still burn today.

“We were thinking very deeply about a lot of these issues that have risen to the fore, perhaps more recently,” she recalls. When Choi began assembling the show in 2017, the Black Lives Matter movement was already active. “Those issues always existed, they were always part of the conversation at the Studio Museum, because we are an institution that focuses on the work of artists of African descent.” At the same time, “We didn’t want to put forward a singular narrative of black artistic production, because that doesn’t exist. There’s not one history that goes from the 19th century to the present… The point of this exhibition is to celebrate these individual artists and their work, and to celebrate the history of the museum.”

As Black Refractions’ lead curator, Choi had to distill the museum’s collection into around 120 objects that would be shown in six different venues, to audiences from New England and the Midwest to the South and the West Coast.

“We wanted to make sure that the organization of the show was open enough that the curators of each venue could… craft an exhibition that suited their individual institution’s mission and what they wanted their audiences to get out of this exhibition.” At the Frye, Chief Curator Amanda Donnan coordinated the installation.

Works in the show are grouped around several themes. “Founders” presents the work of activist artists like Romare Bearden and Jacob Lawrence, important figures in the Black Arts movement of the mid-20th century that led to the museum’s founding. “Framing Blackness” encompasses Black artists’ diverse views of Black life and identity. In contrast, African artists who embraced “Abstraction” as a more universal form of expression encountered pushback for work that did not exclusively identify as Black. In “Their Own Harlems,” photographs by James VanDerZee and Dawoud Bey depict Harlem, the place, while other artists capture the essence of Harlem as a cultural or philosophical home.

In addition to exhibiting art, one of the museum’s founding initiatives is its Artist-in-Residence program, which brings artists to work inside the museum and the Harlem community. A dozen past artists-in-residence have works in this show. Alumni such as Kehinde Wiley, Mickalene Thomas, Wangechi Mutu and Jordan Casteel have gone on to critical and commercial success and exhibitions in major museums, demonstrating the program’s impact in bringing recognition to artists of African descent. Wiley and Thomas had solo shows in Seattle, at the Seattle Art Museum and the Henry Gallery respectively. While they are the headliners, Black Refractions as a whole is an expansive and thought-provoking survey of 20th century art of the African diaspora. We should take advantage of this chance to see the cream of the Studio Museum’s collection here in Seattle.

Black Refractions: Highlights from the Studio Museum in Harlem is on view at the Frye Art Museum through August 15. Information at https://fryemuseum.org or 206-622-9250. Admission is always free. Some COVID protocols still in effect.