When years of burnout and job dissatisfaction are swallowing ambitious professionals, a real “Careercation” might be the way out. Just ask Seattle entrepreneur David Niu, author of the book of the same name, who coined the term to describe the counterintuitive: an extended vacation from work to enrich your career and life for the long term.

After more than a decade spent co-founding and building new media companies BuddyTV and NetConversions to remain competitive in a fast-changing technology industry (the latter was sold to aQuantive in 2004), Niu moved at the same break-neck speed to hit a wall at high velocity many years later. Though he was successful by many external measures, he needed something more to sustain him internally: experiences that enrich, challenge, and spawn personal growth. He also wanted to pursue a happiness that he could share with his wife and young daughter. 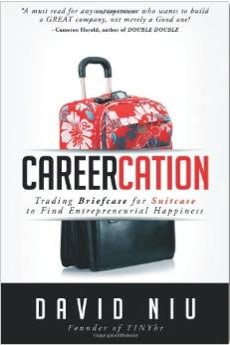 Six months abroad across the Pacific Islands was the answer.

“When I was trying to convince my wife to get on board with this [trip] and with our newborn, she was in nesting mode and very protective, Niu said. “She was like, ‘Man, are you sure?’ Near the end of our ‘careercation,’ [my wife] was like, ‘When are we going to the next one?’”

Niu embarked on his journey in 2011 to give his family something they would never forget: the sights, sounds, wonders and majesty of New Zealand, Australia, Korea, China, and Vietnam. In these countries, he also met with business leaders to gather wisdom and best practices to fight toxic work culture: the growing beast, when fed, would eat away at employee satisfaction and retention, creating a seemingly intractable problem for executives and mutual unhappiness and burnout for both management and their employees.

According to a recent survey mentioned in Careercation and documented by palliative care specialist and author Bronnie Ware, not being true to oneself to meet others’ expectations, not allowing oneself to be happy, working too hard, not staying in touch with friends and not having the courage to share what one is really feeling are the top five regrets people have on their deathbeds.

Niu connected this study pointing to happiness with work culture—the kind that breeds job dissatisfaction. Many reputable companies struggle with employee retention as a result, often wasting resources that attract employees who are incompatible with organizational values. From this, a business idea emerged; one he incubated quickly from zygote to birth of a startup.

Shortly after his return to Seattle in 2012, Niu incorporated TINYhr, a Seattle-based human resources startup helping employers get an accurate read or “pulse” on their employees by designing a simple TINYpulse survey gauging how the work environment and management are doing. Within two years, TINY’s client base has grown to more than 300. And by popular demand, TINYhr has expanded their survey tool to gauge the satisfaction of employers’ clients.

Niu’s growing client base is also diversifying: from a small construction company in New Zealand, to a growing NGO in Haiti, to Seattle’s Experience Music Project (EMP) Museum to rising e-commerce agencies such as Airbnb.

Inside his own Seattle office, Niu practices what he preaches. He and his team actively practice positive company values to resist a toxic culture that can grow all too fast to plague companies, employers, and employees for generations.

But take it from Niu himself. In a recent interview with the International Examiner, Niu explains how embracing happiness can be critical to sustaining a company’s long-term success.

International Examiner: You mention at the beginning of your book that you were raised by a “Tiger Mom.” Did your family readily embrace the idea of happiness when you were growing up? What was their definition of it?

David Niu: If you do well, that’s just the interpretation of happiness. So it’s not like, “Oh, you had fun at the park,” it’s like, “Oh, you got straight ‘A’s. That’s good.” So that was more of the lens that my mom would define happiness. My mom defined happiness as, “Oh, you’re achieving. I’m happy, therefore, you should be happy.”

IE: Everyone thought you were crazy when you decided to embark on your “careercation.” What specifically was your parents’ reaction when you told them you were doing this?

Niu: They were like, “Why would you do that? You have your own company that’s doing really well. And why would you want to take this big risk?”

It hearkened back to when I was in college. I decided that I was gonna study abroad in China (in 1994), which freaked them out. They said, “Why don’t you just study abroad in Taiwan where we have relatives? It’s safer there, we know people there, and if you get in trouble and you need help, we can do that, and you know, it’s a good school.”

And I’m like, “You know, I don’t want to do that. I think I need to push myself to be a little different. … Now my parents admit that it was a great decision for me to do that.

IE: And do you think of (going on your “careercation”) as a Western concept necessarily?

Niu: I think it is a little more Western. I think I got influenced by other people who have done something similar, who basically were like, “Hey, I don’t want to wait till I’m in my 60s and I’m retired to go on vacation when I have a little bit of wealth, but declining health. Why don’t I just chunk up my retirement throughout my life and take these career vacations?”

But I want to model for my child what I want to do to be happy, regardless of what society expects.

IE: Is “careercation” something that you encourage in your employees now?

Niu: For folks internally [at TINYhr], we don’t have a PTO (Paid Time Off) schedule. We don’t have like vacation or sick days. [One of our] values is, “Hold yourself accountable: big freedom equals big accountability.” So we have someone going down to the World Cup. [So I say], “Hey I hope you don’t take your laptop with you and you can really unplug.” But for him, he really wants to take it.

IE: That kind of accountability, huh? That runs counter to what I think of when I hear the word “accountability.”

Niu: It’s just that I think he’s so accountable here, [I tell him], “Hey you should take time off. You should trust that you did your job right, and the team here has got your back.”

This interview was edited for clarity and length.