My college professor once declared, “If you write a novel that everyone loves, then you haven’t done your job.” He meant, of course, that the most interesting novels do not always generate a consensus of glowing reviews but often, impassioned disagreement. This brings me to Hanya Yanagihara’s A Little Life, which has generated much discussion, including a review by Alex Preston in The Guardian that, while positive, raised legitimate criticisms. A Little Life is a National Book Award finalist, so it is no literary lightweight. I won’t mince words, though: this sprawling, 720-page novel is ambitious, but it is also claustrophobic and needlessly repetitive. It is the opposite of Yanagihara’s first novel, The People in the Trees (2013), which was taut, compelling, and richly descriptive.

A Little Life centers on four friends in New York City: Jude (an attorney), Willem (an actor), Malcolm (an architect) and Jean-Baptiste (J.B.) (an artist). The novel follows their friendship and career trajectories from their late teens to their early sixties. In A Little Life, each of Yanagihara’s characters becomes professionally or creatively renowned, and financially successful. They are the elite, and they live, work, and play in the global economy.

Jude St. Francis is the novel’s enigmatic central figure, with ambiguous ethnic and familial origins. He is a tabula rasa, an orphan whose unclaimed history is invented by the monastic brothers who take him in as an infant, and who physically and sexually abuse him as a small child. Brother Luke, an apparent polymath, teaches Jude mathematics, classical piano, and foreign languages. He also takes Jude on the road and prostitutes him to a series of pedophile clients. Jude ends up in one abusive situation after another, culminating in a final escape from his captor, Dr. Traylor, who toys with Jude before running him over. Jude survives and later graduates from MIT and Harvard.

Yanagihara has created a difficult and remote character in Jude, who is physically disabled and psychologically damaged. Jude suffers from a pathological self-hatred, which manifests itself in cutting, starvation, and other behaviors that endanger his health. Jude’s loved ones, including his friends, physician, and adoptive parents, Harold and Julia Stein, attempt to intervene. But Jude continues to harm himself despite their entreaties, stubbornly asserting his independence and alternately begging their forgiveness, as he whittles his physical existence down to a nub.

Much of Jude’s story is told through layers of narrative hearsay. As a writer, Yanagihara tends to tell, rather than show, when she should be doing the opposite. Jude’s suffering dominates the novel, yet he is also a high-functioning partner at his law firm. He spends most of his time working, which seems to help channel his implied bipolar and obsessive-compulsive tendencies. Though his work life is mentioned sparingly, we are told that in Jude’s “life at the firm … he had no past, he had no deficiencies … it was at that office … that he felt at his most human, his most dignified and invulnerable.” Jude is a cold and masterful litigator, the opposite of the empathetic yet troubled soul he is at home, but Yanagihara chooses not to show Jude functioning at his best, only at his worst. 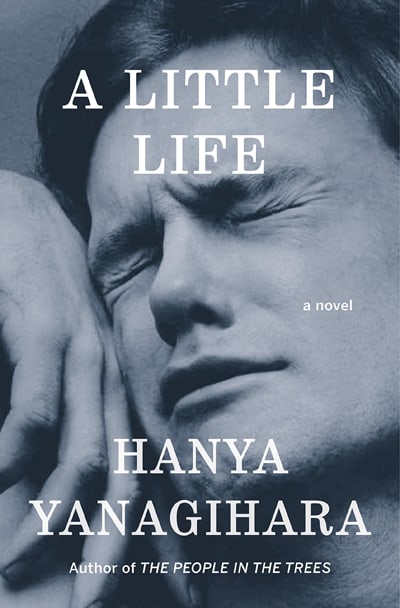 A Little Life shines when Yanagihara breaks the narrative tension and allows her characters to breathe, to actually talk about subjects other than Jude’s problems. Harold’s contracts discussions and Jude’s explanations of mathematics and the axiom of equality are beautifully written and serve to illuminate the novel’s central themes. Jude clearly has a voice and a point of view, but these are rare diversions from the novel’s sustained focus on Jude’s cycle of self-abuse and denial, a conflict with his loved ones that is unnecessarily repeated to the point that even Yanagihara seems to tire of it by the end of the novel. Without a counterpoint of Jude practicing his craft and genuinely interacting with others, all the reader knows is half the man.

This, then, is one of the novel’s many (minor) flaws: that the agent most abusive of Jude’s personhood is not Brother Luke, or Dr. Traylor, but the author herself. Yanagihara makes it clear that Jude is so broken that he will forever be unknowable to his friends and family. But to make Jude similarly unknowable to her readers further dehumanizes Jude and renders our understanding of him incomplete.

Yet A Little Life is not without substance. In between Jude’s cutting, Yanagihara manages to broadcast subtle themes about sexual politics and self-identity. This leads us to Willem and Jude, and how they perceive themselves within this larger context. When their friendship evolves into a romantic relationship, Yanagihara focuses on these issues in all of their uncomfortable forms. Early on, Willem denies that he is gay: “‘I’m not in a relationship with a man … I’m in a relationship with Jude.’” The politics of individual choice have now come full circle, and Willem’s arguments, while disingenuous on their face, seem no less valid than any other arbitrary declarations people make about their specific histories, preferences, or identities.

Jude’s dilemma runs much deeper, since he is asexual by choice. Sadly, Jude is an aberration in our hypersexualized world: Jude “wished someone would tell him that he was still a full human being despite his feelings … Surely his hatred for the act was not a deficiency to be corrected but a simple matter of preference?” Jude’s relationship with Willem causes Jude deep trauma because for him, sex is a physically painful and unclean act. And for Willem, he senses that he is no better than Jude’s former abusers for insisting on a physical relationship. Their unconventional love story is bittersweet as they struggle to accommodate Jude’s aversions, “inventing their own type of relationship, one that wasn’t officially recognized by history or immortalized in poetry or song, but which felt truer and less constraining.”

Above all else, Yanagihara’s primary concern is whether Jude is truly the agent of his own destiny. The novel’s themes of mind-body dualism and the limits of language all contribute to this understanding. Jude, always defiant, can no longer reconcile his pain or isolation: “what he is left with is his elemental self, someone he has never liked, someone so incapable of occupying the life he has.” Jude’s loved ones insist that his life holds intrinsic value and cannot be spent as he sees fit, but under the axiom of equality, Jude’s damaged psyche cannot be repaired by time, love, or forgiveness. Jude is trapped by his own facticity, and as he recites the lied, “‘I have become lost to the world in which I otherwise wasted so much time,’” we see that this is true. As Jude feels the walls close in and his life regress into something “smaller and smaller,” the novel’s title, which initially conveys sorrow and regret (among other things), now expands to encompass the whole of the novel, and every character in it.

While A Little Life has much to recommend, it is a complex, frustrating novel that sometimes feels deliberately constructed rather than organically conceived. Yet I would say without reservation to prospective readers: buy this book and decide for yourselves. Having produced two exemplary novels in the span of two years, Ms. Yanagihara has earned the right to have us readers (and reviewers) seriously argue the merits of her work.

Hanya Yanagihara appears in Seattle in conversation with David K. Wheeler on Friday, November 20 at 7:00 p.m. at the University Book Store in Seattle’s University District, 4326 University Way, N. E., 1-800-335-7323. A discussion and book signing follows (you may pre-oder an autographed copy if you can’t attend).