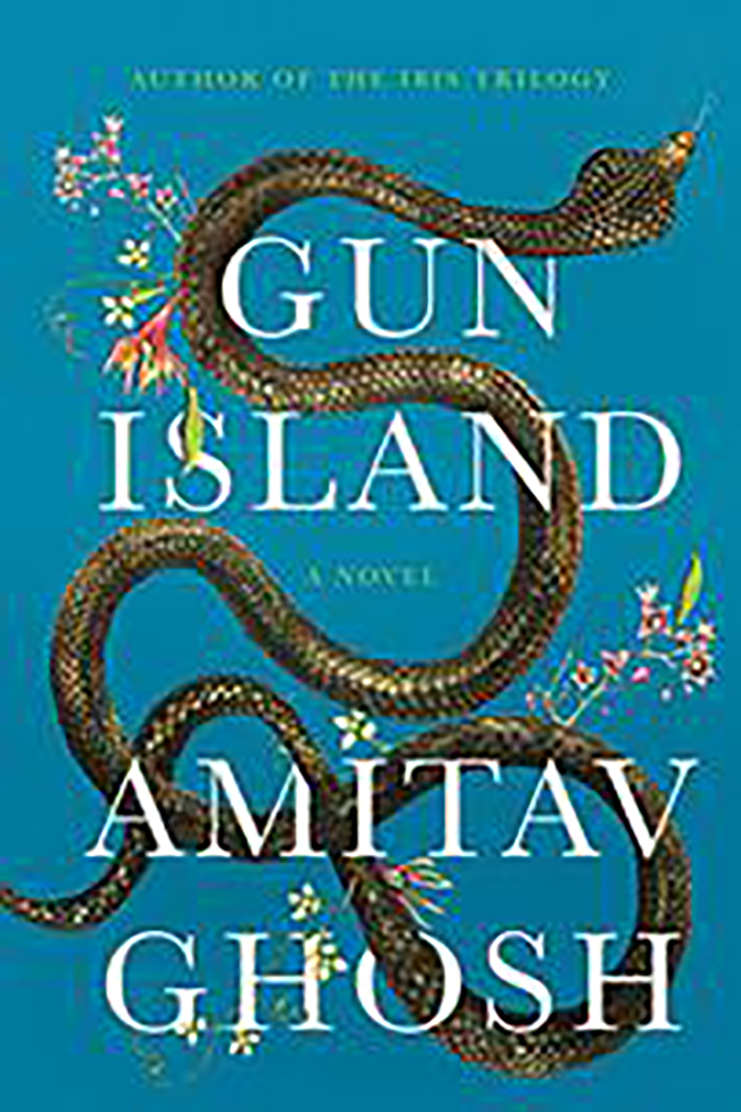 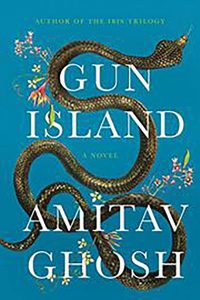 In his The Great Derangement (2016), Amitav Ghosh critiqued realist fiction for not grappling with climate change, and his new novel, Gun Island, pushes the limits of realist fiction to examine the disparate and unbelievable range of climate events that shape our everyday life. Super cyclones, forest fires that destroy acres of wilderness, the migration of marine mammals, unprecedented hailstorms are all featured in this narrative. In juxtaposing these seemingly surreal experiences that occur with greater frequency, the author pushes us to examine not just the genre of realist fiction but also to forge links between environmental events and current mass migrations of people from the global South to the global North.

The novel’s protagonist is Deen Datta, a rare book seller from Brooklyn, who is on a vacation in Kolkata when he is summoned by a distant relative, Nilima Bose, to learn of the story of the Bonduki Sadagar or the Gun Merchant. With the help of Piya Chatterjee, an Indo-American marine biologist from Oregon, Deen journeys to the Sunderbans to find a lost temple dedicated to Manasa Devi, the goddess of snakes, rumored to have been built by the Gun Merchant. There he is assisted by several locals including two young men Rafi and Tipu. For Ghosh fans, some of these characters are familiar because we have encountered them in his earlier novel, The Hungry Tide (2004).

Deen discovers intriguing clues to the story of the Gun Merchant in the carvings and symbols on the wall of the temple. His scholarly approach of taking notes and documenting artifacts is interrupted by the deep mud and marshy setting which precludes his taking a cell phone or notebook into the temple. When he encounters a king cobra that is protecting the shrine and which attacks him, he escapes, but his young friend, Tipu, is bitten. In this episode, the narrative balances the empirical and the scientific (how antivenin saves lives, the difficulties of finding such life saving medicine in the jungle) and the fantastic (a hallucinating Tipu has visions about a dangerous situation with Rani, an Irawaddy dolphin that Piya is tracking in her research).

Torn between the empirical and the fantastic, Deen Datta turns to his friend and famous academic, Cinta, whose encyclopedic knowledge of Italian Renaissance history, legends and scholarship offers Deen intriguing and intuitive connections between India and Venice in the past. Cinta’s ability to accept simultaneously the fantastic and the empirical and Piya’s resolute refusal to trust anything but scientific data frame Deen’s own struggles with how he interprets, imagines and understands events. What constitutes evidence? Is scholarly work on tracing the routes of the Gun Merchant narrative actually dependent on leaps of imagination than archival research?

Deen’s quest for the narrative origins of the Gun Merchant takes him from Kolkata to Los Angeles to Venice. Along the way, he experiences epic climate events—raging forest fires, an intense tornado, an unexpected hailstorm—which seem to be either the work of supernatural forces like Manasa or the result of an accelerating global climate crisis. Intertwined with his quest is also the narrative to Rafi and Tipu, friends and lovers, who are climate refugees trafficked to Europe. Deen coincidentally reconnects with Rafi in Venice and becomes involved in a migrant crisis on the Mediterranean as refugees seeking safety are caught on a rickety vessel and clashes break out between nativists and activists, and the narrative’s conclusion is filled with a miraculous moment that brings animal migration and human migration together in a temporary resolution to the refugee story. The reader is still left with the big questions on climate change, human migration, and the sense of a world hurtling towards a climate apocalypse.

Ghosh’s narrative is both beguiling and frustrating. In typical Ghosh style, there are digressions into discussions of the historic impact of cyclone Bhola on the Sunderbans and national politics to explorations of animal behavior. Interspersed with these are fascinating nuggets on Venetian history and architecture. The piling on of coincidences and mystical visions stretch the boundaries between realism and speculative fiction which for some readers may seem like a chaotic or loose narrative.

Ghosh is no novice writer and his loose and improbable narrative precisely carries the out the points he made in The Great Derangement about writing the Anthropocene. Perhaps, the most powerful moment in this narrative is when Deen meditates on the differences between the migration of indentured servants and current migrants from the global South. He notes that the migration of slaves and coolies was managed by the colonial state that decided where they would go and what they would do but today’s migrants from Bangladesh, Ethiopia, Libya and other places were launched by the migrants themselves who had networks and were familiar with laws and knew the countries they were heading to. “Instead, it was the countries of the West that now knew very little about the people who were flocking towards them.”

He goes on to note that enslaved and indentured people were producers of cotton, tobacco, and sugar that the colonial metropolises needed but today’s migrants were consumers of smartphones, computers and cars. The reason that Europe and the West feared them was because they threatened to unravel the centuries-old project of white supremacy and the West no longer had demographic control. The novel leaves the reader pondering many questions, and while the problems seem overwhelming, there is, too, a sense of hope and a belief in the prevalence of justice.