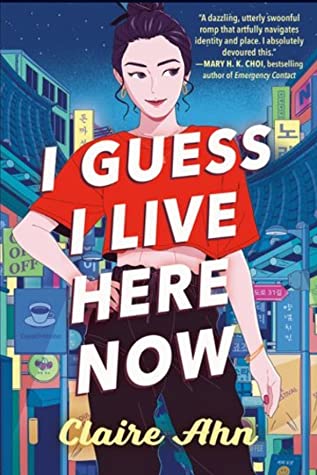 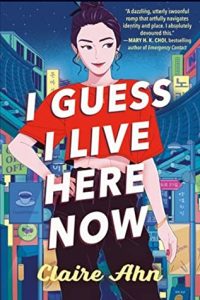 Imagine being a high schooler with an established life with your mother and your friends then have that all thrown out the window the moment when your parents decide to move you to another country. In I Guess I Live Here Now, Claire Ahn drops us right into the struggles of a teenager who must adapt into her new life with first-class plane rides, a luxurious villa, and a stoic rich stranger she is supposed to call her dad. I really enjoyed following Melody/Solmi’s story. We barely know anything about Mel’s life other than she lived in New York with her best friend Sophie. So, when her mom told her to pack up and fly to Seoul, South Korea to live with Melody’s father, we know as little as she does.

What I really liked about Ahn’s story telling is how real it felt. A junior in high school who had been studying in the states for most of her life is going to struggle, especially when her father signs her up for every challenging class possible. Ahn didn’t feed into the “smart Asian” stereotype where Melody was passing her classes with flying colors. No, she was struggling and became emotionally drained when she didn’t get straight A’s. Not only does Melody battle in the academic department, but she also has to establish her new social life and that is making new friends and trying to get along with her father.

One of the most endearing things about Claire Ahn’s writing is that it felt different from other Young Adult stories. I felt like this could actually happen. The awkward moments with a cute boy, the struggles to make your parents proud of you even if it kills you inside, and the slight acts of rebellion just to take back some control that was taken away from you. I was teleported into Melody’s world, following her around as we explore the city of Seoul. Though, I wish that a few characters we more fleshed out and the ending didn’t feel as rushed. There were moments where the drama was a bit cliché. Family drama is going to happen, but what happens among the high schoolers could’ve been a bit more original and not solved so quickly.

Overall, I really enjoyed this story. For a debut novel, I believe it was fantastic and enriching. We are looking into a young girl’s life that changed so rapidly, but she will always find a place to call home.