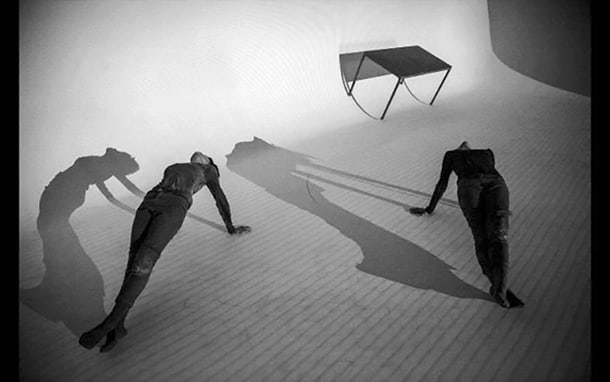 Gu Jiani’s “Right and Left” is a study on love performed by two dancers (one, the choreographer), set to flashing lights, crackling electrical sounds, a Chopin waltz, traffic and beach audioscapes, more melodious fare, and uses two stools and a table as props.Gu Jiania performed as part of the Seattle International Dance Festival in June.

Flashing, strobe-like lighting and sounds of electrical static at the beginning and later in the piece, create an industrial feel. Two slender, androgynous, dark-clad figures weave through the flashing light and machine-like sounds: their sinewy, sliding movements, largely in synch with each other, add poignant contrast.

The choreography throughout is taut and controlled, yet extremely fluid. The two dancers connect and meld, then separate in seamless, lithe sliding on the floor and then to sinewy entwinements upright. The dance evokes a deep, silent tension, like an organic uprising occurring against the electric fence of sounds and light: beanstalk tendrils that might wrap around wires, stealthily eluding shocks.

Notes of a Chopin waltz begin and the movements become more pedestrian. Two round stools join the dance, one dancer encasing the other within the stools’ legs, defining space while offering furniture for the other dancer to lie on. The contraption perilously misses the dancer’s body, like the magician’s swords that slice through a trunk in which his assistant lies. An element of trust and danger, a bit of sadism, encroaches.

The dancers seem like the stools: uniform, rail-thin, easily stacked, and surrendering at times, too well to manipulation. Dancer A (Gu Jiani) at one point sidles up to Dancer B (Wang Xuanqi), removing one stool, and hovers over Wang, who is sitting on the other. Gu begins manipulating Wang, twisting, turning, pushing, bending, and snapping her upper body and head sharply, as if Wang is merely an object. Wang complies, her sinewy movements, completely surrender to Gu’s sharper, yet still taut, succinct movements. The interchange grows increasingly violent, yet remains somehow, still intimate: a dance of torture but also, of trust.

Then, as Wang moves off stage, the piece develops with a catharsis of some kind in Gu’s removing her sweat-drenched shirt, bending over, then rising up to confront herself in the audience’s gaze. In her strong gaze, we may also see ourselves, complicit in the modern warfare she seems forced to engage in. As Gu puts her shirt back on and moves backwards, slowly, self-consciously, ending in a crouch, she gestures as if holding her partner again.

The tenor then shifts with syncopated music and flashing lights, like the beginning scenes, but with added soundscapes from a beach, traffic, with camera clicks suggesting snapshots of life events. As the two dancers reunite, connect and move again, there is the same fluid, yet taut manner in the movement, but with more pause, adding a spaciousness to explore a new connection. Wang’s movements and manner express no reproach, but rather, a kind of acceptance or compassion. The aural scenery adds perspective on their place in the scheme of life.

The two dancers’ movements progress to playing now on the table, taken down from its mooring against the back stage wall and upturned. It is easier for two to play on its larger legs and greater surface area than was possible with the stools. A sense of mastery over the prop as well as room for equality is further expressed in the relationship between the two dancers being side by side, rather than one hovering over the other, or manipulating her with the stools.

Gu Jiani’s “Right and Left,” deftly tells a tale of relationship in a technologized, urban era, using choreography that is executed to express a deeply intimate connection – one that exemplifies violence, subjugation, confrontation, guilt, trust, surrender, acceptance and transformation. A military reference that echoes in the violence of the earlier scene, “Right and Left” becomes transformed into a new view of partnership, balance, and perhaps, simple acceptance of life on life’s terms.