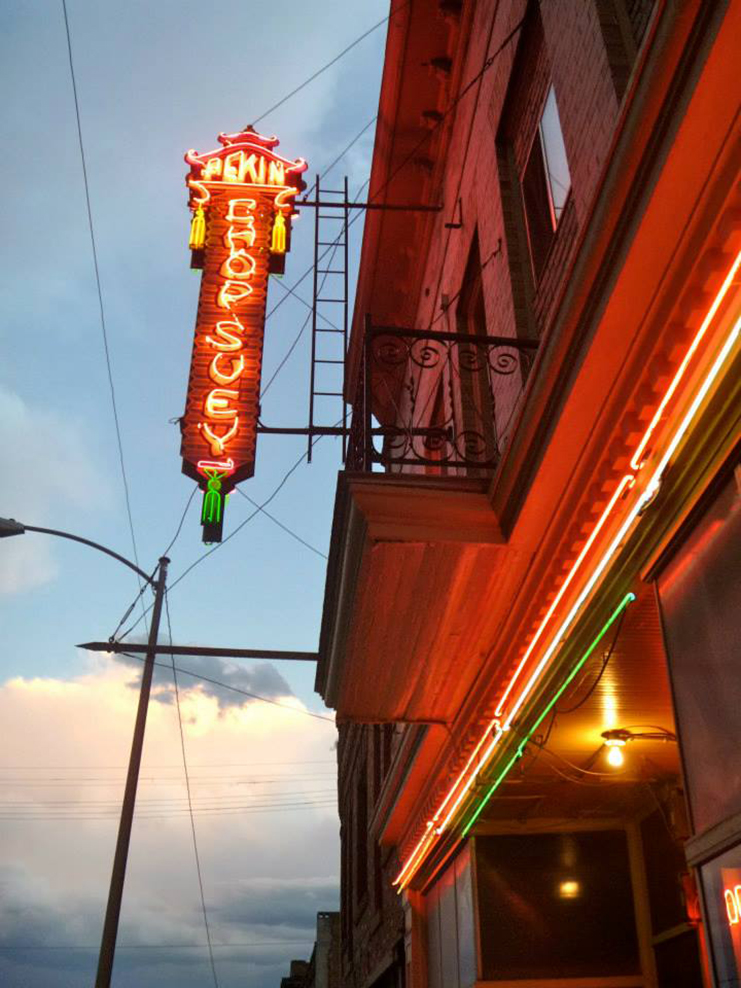 Before I even knew what being Chinese American was, I knew Pekin Noodle Parlor was home.

Pekin Noodle Parlor was the Chinese restaurant I grew up in, and it also happens to be the oldest continuously-running Chinese restaurant in the U.S. They’ve been serving Chinese American classics like Chop Suey, Egg Foo Young, and Fried Wontons with Sweet and Sour Sauce since 1911. Contrary to popular belief, the oldest Chinese restaurant isn’t in San Francisco, New York, or even any other city with a significant Asian population. It’s in the middle of nowhere – I mean – Butte, Montana.

Isn’t Montana, like, not very diverse? Well…you’re not wrong. In 2020, Butte is less than 1% Asian, but in its heyday, Butte had a bustling Chinese population. Back in the 1870s, 10% of Montana residents were Chinese. The numbers dwindled down over the years, and when I grew up there in the 90’s, there were fewer than twenty Asians in the whole town, and you can bet my parents knew them all. Honestly, the Asians were either in my household, or the Tam household who ran the restaurant,with a few stragglers around.

My parents, bless their heart, were born-and-bred Hong Kongers who chose to settle down in Montana, for reasons I cannot comprehend to this day. They originally came to the US for college, and said that the fees at Montana State University – Bozeman, were the most affordable. This makes sense on paper, but there’s no way I would choose to live in a place without an Asian grocery store.

Enter Pekin Noodle Parlor. My parents started going there regularly, for a taste of home. New Asian faces were a rarity (and still are) in Butte, and before you know it, Mama and Papa Kwan were talking up a storm with the owner, Danny Wong-Tam. We came to know Danny as Uncle Danny over the years. My dad would often help out at the restaurant by waiting tables on the weekend, or other busy occasions like Mother’s Day.

I spent countless hours coloring, playing with barbies, basically hanging out inside my own booth. If you’ve seen photos of the restaurant, there are around 17 booths in the main dining area. Pekin Noodle Parlor has had optimum social distancing measures long before COVID-19. The staff would check on me often if my parents were helping out in the kitchen, and I had unlimited Shirley Temples with extra cherries, courtesy of the bartender.

While I mostly had free reign inside the restaurant, my poor mother had to keep a watchful eye on me, lest I terrorize nearby guests too much. When I was more well behaved, we’d both help out with simple kitchen prep. I remember peeling hard boiled eggs at one point, but let’s face it, I was only a few years old, so there wasn’t much I could do. Once in a while, Uncle Danny would slip me a $20 bill for “being a good helper” in the restaurant. I’d immediately show off my small fortune to my parents, who’d then chastise me for taking money from Uncle Danny. They’d “fight” over it for a while, but Uncle Danny always won.

My parents and I are forever grateful to Uncle Danny and his family for becoming our family. We didn’t (and still don’t) have any relatives in the US, and Uncle Danny welcomed us wholeheartedly into his home. Knowing the Tam family has been an absolute blessing.

Over the years, we did have several grandparents and relatives visit Butte, and they all found the sleepy town to be charming. My paternal grandfather and Uncle Danny got along so well – they shared the same ancestral village, and talked up a storm in Taishanese. Some things are just meant to be!

In addition to helping out at the restaurant, my parents also tutored Uncle Danny’s son in math. When I moved back to the U.S. from Hong Kong in 2012 to study at the University of Washington, one of Danny’s daughters, Lillian, helped me settle down in the dorm, and I spent a couple of Thanksgivings at her home in West Seattle. She helped me find my feet here – she even helped me pick a phone plan! I wouldn’t have made it through my freshman year without her.

I wish I were writing this under different circumstances. Uncle Danny passed away on Monday, November 30. He will be deeply missed and we will remember his legacy of kindness for as long as we live.

If you ever happen to be in Butte, Montana, please stop by Pekin Noodle Parlor. My parents and I highly recommend the BBQ Pork, Sweet and Sour Chicken, and the Pekin Special Fried Rice.