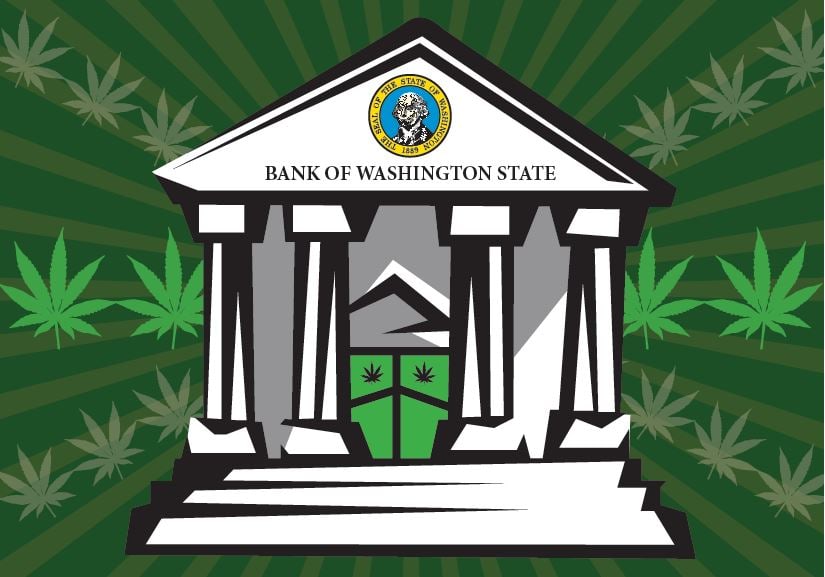 Sellers of Washington’s newest cash crop will have no choice but to store the flood of cash in bags, lots of them monitored by private security guards.

State Sen. Bob Hasegawa, D-Seattle, admitted: “We are just opening the door to the possibilities of armed robbery, organized crime, and theft.”

To shut the door on these dire predictions, Hasegawa supports the creation of a state-owned bank, like the Bank of North Dakota (BND), one that provides banking services—checking accounts and credit-card processing, for example—to businesses the BND does not serve: legal marijuana businesses. His plan differs from the one laid out in the February 14 guidance from the Justice and Treasury departments calling for large commercial banks and credit unions to provide these services. Last August, the Justice Department (Deputy Attorney General James M. Cole) also issued a memo with eight guidelines that update its policy on marijuana enforcement and Washington’s I-502, an initiative passed in 2012 that decriminalizes the use of recreational marijuana.

Hasegawa said: “[This] Cole memo gives us guidelines on how to implement I-502, but it did not address the financial piece. … We cannot allow a cash-based system to implement 502.”

The Cole memo classified marijuana as a “Schedule I” drug under the federal Controlled Substances Act and makes it “illegal in the eyes of the federal government.”

“Fundamentally,” Hasegawa said, “they [the Justice Department] have limited resources. So, if we adhere closely and strictly to the eight guidelines, they’ll re-direct their limited resources to more important matters.”

Banks and credit unions still risk prosecution by the federal government for racketeering or money laundering if they work with marijuana businesses that violate these guidelines.

Established in 1919, the BND is the only bank of its type in the country with an excess of $270 million in capital, partnering with local banks, economic development groups, and guaranty agencies. Its mission is “to deliver quality, sound financial services that promote agriculture, commerce and industry in North Dakota.”

Over the past decade, it has returned millions of dollars that benefit North Dakota’s economy—an annual average of $29.4 million to the state’s general fund.

“Why should we let the Bank of America use taxpayer dollars to make a profit for itself? Why don’t we, instead, create our own publicly-owned state bank?” Hasegawa asked. “And then, the taxpayers will make money for themselves.”

He said a state community investment bank like the BND could help fund local issues, easing the burden on taxpayers. Hasegawa emphasized, “We can lend it back into the community for public purposes like building schools and water and sewer systems and roads.”

These public purposes would be funded “cheaper than we would be able to borrow from Wall Street, who would then just make a profit off of us,” Hasegawa explained. “When we borrow from ourselves to build these things, we’re just paying ourselves back. So, it uses public dollars for the benefit of the public, rather than profit for Wall Street.” Hasegawa identified this as the most important reason for this bank. 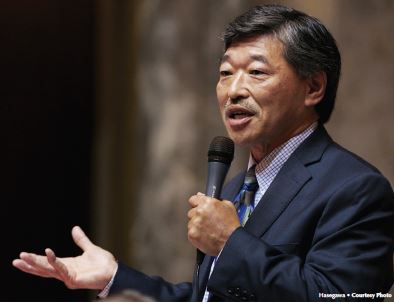 Last month, Hasegawa co-sponsored Senate Bill 5955, which would create a publicly owned trust that would be responsible for the accounting of the cash.

In addition to the collection of taxes, Hasegawa said, “If we had a publicly-owned bank and required every participant in the marketplace to have an account inside this bank, we could track every last dollar that moves within this marketplace and assure the federal regulators that we’re doing our due diligence to adhere to the guidance memos.”

The bill faced resistance for its “out-of-the-box thinking,” according to Hasegawa.

“People were real standoffish because the banks have such a powerful lobby here,” Hasegawa said. “It’s been almost impossible to move the broader version of the bill that I’ve had for four or five years now.”

Hasegawa said at a public hearing last January in Olympia before the Senate Financial Institutions, Housing, and Insurance Committee: “The conditions and requirements that will guide us are evolving as we speak. But despite that, we have to act now. Washingtonians needs a safe, secure marketplace where growers and sellers aren’t cash-rich targets for criminals. … We’re exposing all participants in this marketplace to violent criminal activity.”

Denny Eliason, a lobbyist for the Washington Bankers Association, said at the public hearing: “But, what is very clear is that even if you did establish a state bank, that financial institution would be in the exact same position we are. They could only operate on a cash-in and cash-out basis. The reason for that is you cannot have access to the electronic banking system or the check-clearing system in our country if you violate federal law. And indeed, this would still be a violation of federal law.”

Banks and credit unions in Washington are deciding what is in their best interest regarding legal marijuana businesses.

Lynn Heider, vice president for public relations and communications for the Northwest Credit Union Association, said, “Our focus is on credit unions and the resources they need if they determine they want to bank legal marijuana businesses.”

“We appreciate the federal guidance,” he added. “It still comes with significant regulatory burden, and it’s policy, not law. We would encourage Congress to take action that allows credit unions to serve these businesses without so many regulatory complexities.”

As far as Congressional efforts go in supporting banking services for legal marijuana businesses, Hasegawa is not optimistic.

“The reality is: Congress is not going to take action,” Hasegawa said. “They are not going to change the law to make marijuana legal.”

At a meeting of the House Financial Services Committee last December, U.S. Rep. Denny Heck, D-Wash., said the legal marijuana business is expected to be a $1 billion a year sector of the economy.

Twenty states and the District of Columbia have legalized marijuana. Colorado and Washington led state efforts to legalize recreational use of marijuana in 2012.

“It’s a long-term project to educate people around the benefits this (bank) could bring,” Hasegawa said about his goal.

“Fifty years from now, like the Bank of North Dakota, we will build a resource for our children and grandchildren to have the capacity to build the type of society that we want them to have.”

For more on how marijuana affects the API community, visit: