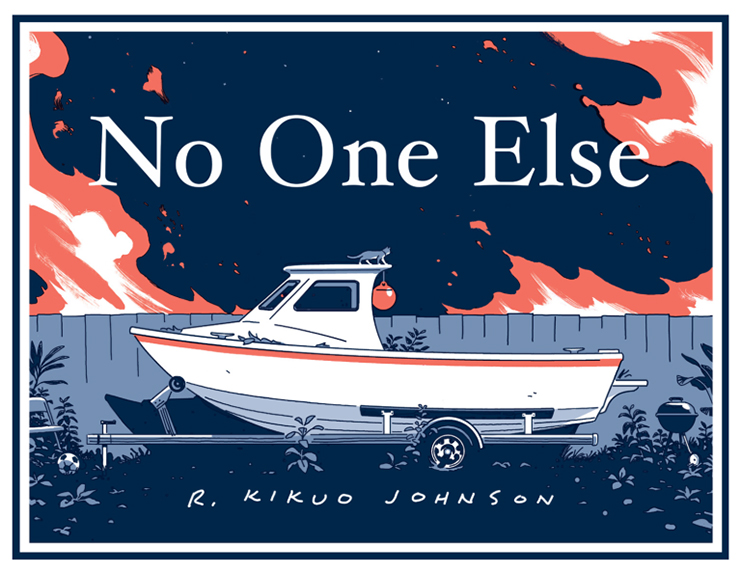 R. Kikuo Johnson is the writer and illustrator of graphic short novel No One Else (published by Fantagraphics in November 2021). Having grown up on Maui, Johnson is familiar with the culture and idioms of Hawai`i. He tells his story with a captivating mixture of humor, bluntness and local flavor like “butta mochi” a local comfort food often consumed for group celebration and/or self-medication. His simple drawings with clean lines capture so well the expressions of each person’s emotions in the moment. The uncluttered detail of even the most intricate settings seem to accentuate the story telling.

The story opens with Charlene, a single mother, facing the frustrations of her job and life while caring for her elderly father who soon dies. With her in this unfolding story is her somewhat neglected and spoiled son Brandon, his cat Batman and Charlene’s brother Robbie, who returns after being away for many years to “help out” after their father’s death. This is not an uncommon scenario in Hawai`i or any other place for that matter. What is distinguishing is the back stories that come out this situation and the manner in which local people in Hawai`i deal with the major transitions and passages in one’s life experience.

There is a notable sequence where Robbie goes to tell an elderly family member of his father’s death. Not only is her look classic; her dismissive comment after Robbie  launches into a boast about his music success in Australia is also classic: “Uncle Danny’s construction crew is hiring.” That is immediately followed by another classic sequence of Robbie ranting about local people’s driving and clueless attitudes and then immediately ranting about tourists’ driving and clueless attitudes. Charlene, Robbie and even Brandon are stuck in their ways. But at times they rise from those ingrained biases, sometimes with flourish, sometimes not, and the beat goes on.

The graphic novel ends with an unsettling but also an unexpected hopeful revelation about Brandon’s cat Batman. It also points to something about Johnson’s use of orange in an otherwise black and white color palette. The color orange seems to symbolize many heightened experiences in life such as taste (Cheetos dust), death, eminent danger and memories, etc. It makes you wonder if at any given moment in our lives there is high lighting happening all around us and within us, but most times we just plug along oblivious or in denial of something trying break through to or in us.

No One Else reminds us that no matter who we are or at what stage in life we are in, no one else is ultimately responsible for our actions. But the double edge is that we are never truly apart from the influence of others and our effect upon them. That, too, it seems, can happen randomly or responsibly. Sometimes we need something to wake us up.