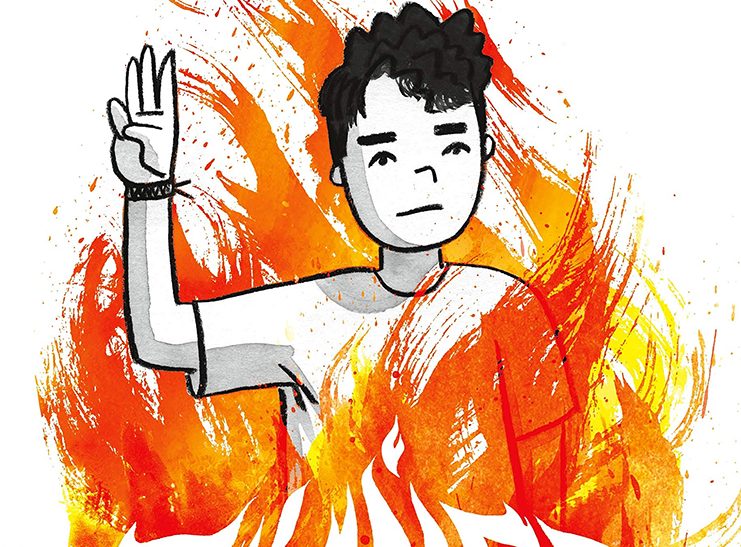 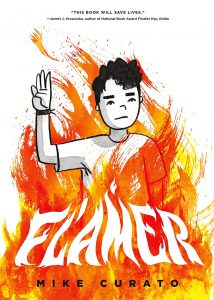 Aiden Navarro, the teenaged Filipino American protagonist of Mike Curato’s touching graphic novel, Flamer, is anxious about many things: After years of attending a Catholic school where he was bullied, he will soon begin attending a public high school where he fears being picked on by a new set of classmates. His parents’ unhappy relationship, bordering on violence, troubles him. And he is burdened by the confidences his depressed mother’s shares with him, the eldest of her three children.

Set in a Boy Scout summer camp in 1995, the novel takes place during the final seven days of the seasonal gathering. Navarro expertly captures the sexual obsession of adolescent straight males and the casual cruelty and insults that some never outgrow.

Aiden doesn’t fit into this testosterone-filled culture. Pudgy, unathletic, and racially different, he’s a target, like the bullseyes his arrows seldom reach in his camp archery class. His few respites come through letters he receives from his best friend, Violet, and the kindness of his tent-mate, Elias, a young man who is in many ways is the opposite of Aiden: athletic, self-confident and daring.

In the rare moments when Aiden lets his guard down and is himself, his fellow Scouts ridicule, or worse, attack him. For a sensitive teen like Aiden, who is just beginning to understand his sexuality, being called “faggot” and “gay,” in a derogatory way, cuts to his core. At the end of the week, feeling abandoned by Elias and Violet, confounded by the Catholic religion which had previously been a comfort, and fearful of the homophobia he witnesses not only in his peers but in some of the adult Scout leaders, he’s at his wits end and decides to take dramatic action.

The book’s artwork, mostly simple black-and-white drawings, doesn’t draw attention to itself, which allows Aiden’s story and emotional journey to be the novel’s focus, and makes Curato’s use of color at key moments in the book all the more dramatic and effective.

In an afterword, Curato explains that he, like Aiden, was overwhelmed as a teen by a “culture of hatred.” Fortunately, he not only survived but has shared, through Flamer, the lessons he learned from his difficult adolescence.

The world has changed since the summer of 1995: The Boy Scouts, which clung for decades to the homophobic exclusion depicted in the novel, now admits openly gay members. Support for gay and transgender youth has proliferated. The racism portrayed in Flamer is not as socially acceptable as it once was, especially in the wake of the Black Lives Matter movement.

Still, there are young people who experience confusion, rejection and violence (physical, emotional and psychological) because of who they are. This book can be a balm to them. And for younger readers, regardless of their race, sexual orientation or gender identity, Flamer is a useful look at a time, a generation ago, when American society was less accepting than the era in which they’re coming of age.