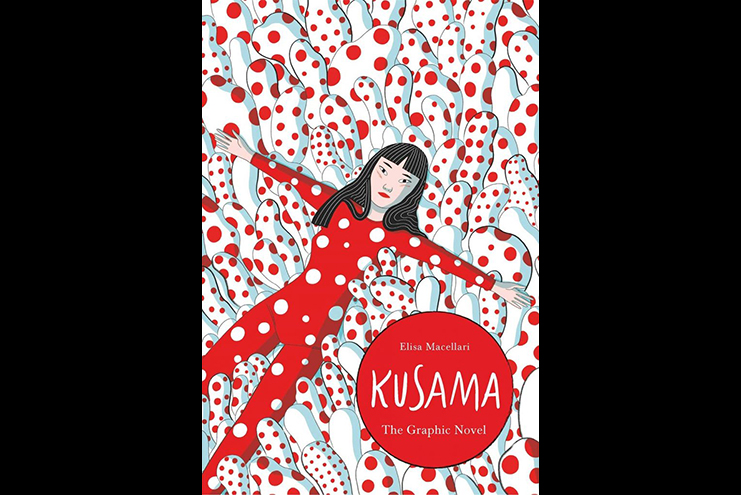 Unlike pop-phenomenon Yayoi Kusama’s own artwork, with its bright familiar colors that contribute to its near-universal popular appeal, Elisa Macellari’s new graphic biography of Kusama uses mostly cool, hard-to-name, unsaturated colors (plus a bright amaranth red.) This relatively restrained palette makes sense, allowing the reader to focus patiently on Kusama’s unusual and dramatic life story, as though through a stylish pair of welding goggles.

The book’s list of sources has only five items, only two of which matter: Kusama’s autobiography Infinity Net and the documentary Kusama – Infinity. This makes it simple to compare the stories Macellari tells with her source material. This graphic biography (biography in graphic novel format) adapts these sources pretty faithfully. It hits all of the main themes: the artist’s youthful rebellion against her family and her conservative native land; her persistent issues with hallucinations, sex-phobia and anxiety; her willingness to suffer poverty rather than give up or compromise her ambitious artistic calling; her prodigious artistic productivity; her interactions with other famous artists; her global notoriety in the 1960s as the organizer of naked protests (“happenings”); her most characteristic artistic ideas (infinity nets, polka-dots, soft phallic sculptures, and mirrored infinity rooms); her slide into depression and obscurity beginning in the 1970s; and her celebrated rediscovery and ultimate triumph, while still alive and still endlessly creating art.

Mental issues provide an inescapable topic when discussing Kusama’s work, much of which she created as a form of escape, to “obliterate” her self and “return to the natural universe.”  As Macellari says in the introduction “I have enormous compassion for her suffering and find the transformation of her psychic disorders into a form of self-medication extraordinary, given it reaches such beautiful heights.” Kusama’s art was fueled by and shaped by mental problems, but its power comes from her rare artistic genius, which was recognized early (though not by her mother.)

The most defining features of Macellari’s caricatures of Kusama are their slanted eyes – also shared by the other Japanese characters in this story –  and bangs. (Macellari’s own background is Italian and Thai.) She does not draw the blindingly-bright and incongruous reddish-orange wig that Kusama adopted as her trademark look after she had become an old woman.

Some details of Kusama’s life that seem puzzling, incomplete and unreliable in her autobiography remain puzzling in this graphic biography.  The graphic novel mentions on page 36 that when she left for Seattle and America in 1957, Kusama had “a million yen’s worth of dollars sewn into the lining of her clothes, so as to avoid the restriction on exporting local currency” and also carried 60 kimonos and 2,000 drawings and paintings to sell. Kusama’s autobiography says “To help cover travel expenses I changed a million yen into dollars at the Tokyo branch of an American company called Continental Brothers. This was of course against the law. In those days, a million yen was enough money to build several houses. I smuggled those few thousand dollars out of the country by sewing some of the bills into my dress and stuffing others into the toes of my shoes.” A million yen was much more than “thousands” of dollars. How was she reduced to eating fish heads from dumpsters in an unheated studio in New York City only one year later?

Many Seattleites remember the enormously successful exhibit of Kusama’s work, “Infinity Mirrors,” at the Seattle Art Museum in 2017. Kusama’s first show in the United States was at Zoe Dusanne’s gallery in Seattle in 1957 (a one-woman exhibition which won attention even in Oklahoma City, over 1500 miles away, in a news article headlined “Japanese Paintings Stir Seattle Critics.”) Macellari mentions the role of Seattle in making possible Kusama’s escape from Japan once on page 35, but understandably leaves out, presumably for reasons of space, more of the story about the short time Kusama spent in Seattle on the way to her destination of New York City.