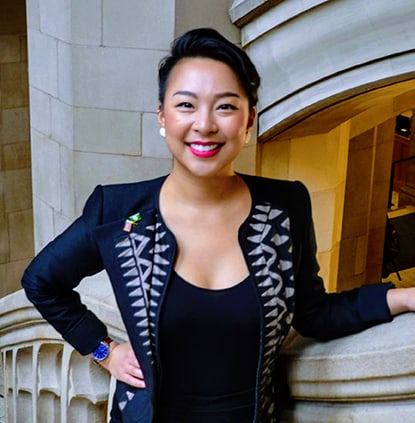 Released from prison decades ago, Roeuth An flourished into a loving husband, father, and thriving community member of Tacoma. After being unexpectedly detained by Immigration and Customs Enforcement, the life An had built was destined to be a memory as he faced another sentence: threat of deportation to a country he no longer new.

As a policy professional, I am frustrated at the poor public policy that allowed this to happen. As a Southeast Asian child of immigrants, I fear the looming threat of deportation will forever haunt our community.

Criminal records jeopardize the residency status of immigrant and refugee populations. After fully serving their time in prison, some formerly incarcerated Asian Americans and Pacific Islanders are further subject to the bureaucracy and terror of the immigration system.

Arriving as a 7-year-old Cambodian refugee, An grew up in a section of Tacoma marked by crime and violence. In 1994, An offered a ride to his friend who was a member of a gang. During that ride, An’s friend drew a gun and fired at opposing gang members on the street. An drove away and was subsequently arrested and charged as an accomplice in the shooting.

This sort of double sentencing is unique to incarcerated immigrants and refugees. Double sentencing hurts Cambodian, Hmong, Khmu, Lao, Mien, and Vietnamese communities, many of whom arrived in the U.S. in the 80’s.

The Illegal Immigration Reform and Immigrant Responsibility Act (IIRIRA) of 1996, expanded the types of crimes that non-citizens could be deported for. The Act indiscriminately threatens immigrants and refugees alike regardless of the war and violence that forced migration in the first place.

Deportation uproots lives and only adds to the trauma that many in our community already struggle with. With a significant proportion of deportation notices ordered due to an individual’s past criminal convictions, over 16,000 Southeast Asian Americans have received notices to be removed from the United States since 1988.

Those who commit crimes, should serve sentences that are appropriate and just for that crime. But it is unjust for individuals to receive additional estrangement and separation from society as a consequence of the individual’s immigration status.

A citizen who committed the same crime would not be burdened with the fear of being ripped away from friends and family and sent to a country they no longer knew. The repercussions felt as a result of that crime are communal and intergenerational in that individuals are never given the chance to reintegrate back into society upon release.

Fortunately, Governor Inslee granted An a pardon. An was able to return to his wife and children.

In a recent NBC article, An details how he was, “more confused than happy” to be released. Until legislation is introduced to reverse the harmful effects of IIRIRA, Governor’s Pardons can be a useful tool to prevent the deportation of our loved ones.

Next year, the California State Legislature will institute the Pardon and Commutation Reform Act of 2018 which expedites and standardizes the process in which the Governor’s office in California handles pardon requests. Washington State would greatly benefit from enacting similar legislation.

Allocating resources to the Clemency & Pardons Board and implementing timelines for application reviews would speed up the process in obtaining a pardon. Faster turnaround could be the difference between having a loved one safe at home and having a family torn apart.

With newly elected homegrown champions such as Washington State Senator Elect Joe Nguyen, and Representative Elect My-Linh Thai, the API community of Washington has a lot to be hopeful for. New avenues for institutional change are appearing in the form of opening policy windows. By proposing legislation to reform the process of obtaining pardons, we can bolster the defense of our vulnerable community members.

As other community members fearfully wait for their pardons to be reviewed, we can prepare for the threat of unjust double sentencing. By demanding streamlined Governor’s pardons, we can defend their right to new beginnings.

Louie Tan Vital is a Filpina American poet, community organizer, and Masters candidate at the Evans School of Public Policy and Governance. Louie has recently worked for the Washington State House of Representatives and the 115th Congress in the United States House of Representatives. She has dedicated her life to fighting for racially-equitable public policy and harnessing performance arts as a means for political activism.