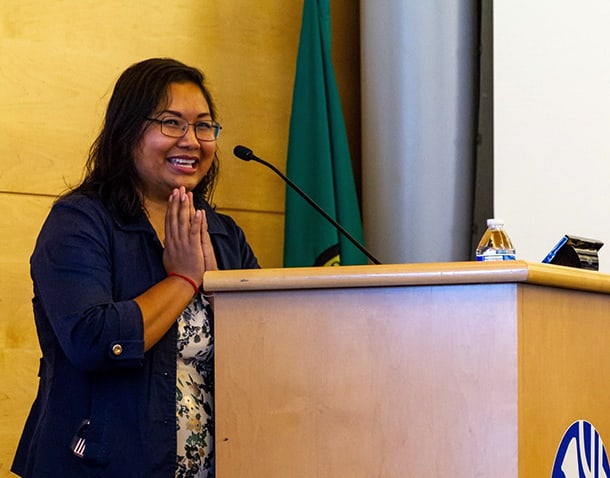 Governor Jay Inslee recently appointed longtime community activist Sina Sam to a position on the Commission on Asian Pacific American Affairs (CAPAA), making her the first Khmer American woman to serve on its board. CAPAA is a state agency made up of 12 commissioners and is led by executive director Michael Itti. The commission focuses on issues pertinent to and affecting Washington state’s Asian American Pacific Islander community including economic development, access to healthcare and social justice. Sam’s appointment follows the departure of another Khmer American, Darren Pen, whose tenure ended in June of 2017.

Sina Sam is a 1.5-generation Cambodian American. She was born in a refugee camp in Thailand following her family’s escape from the Cambodian Genocide. Her family settled in Seattle, where she was raised. She is an alum of the University of Washington but her professional career is currently at Washington State University where she is a program exam specialist within the Global Campus program.

Sam’s current affiliations include Formerly Incarcerated Groups Healing Together (F.I.G.H.T.), a community group that advocates on behalf of incarcerated community members through community support and cultural engagement and the Southeast Asian Resource Action Center (SEARAC), where she has served in the facilitator and advisory capacity.

Sam’s career as a community activist has been marked by what she often describes as “shifts” on her journey to where she is today, with access to opportunities she says that other members of her community have not had, things as simple as higher education. Because of some of the resources she’s been able to connect with, she admits her capacity as an advocate for the community is beyond that of many of her peers and is the reason she checks this “privilege” by placing herself at the forefront of the community’s needs. “It’s not something I planned to do 15 years ago, but because it’s something that is advantageous for my community, I’ll step into that role to do it. Or I’ll step to the front lines.”

Sina has been doing community work for over 20 years with her journey beginning with her struggle to find herself. “In terms of our identity and the U.S., I think I’ve always done that [self-research] as a child, trying to learn where my parents come from…they don’t talk about it.”

Her pursuit of finding herself accelerated when she entered higher education and found herself having access to historical information about Cambodia, which she never experienced in a public school setting. “Because of the trauma, some of it [her parents’ stories] may be accurate depending on their personal story. Because I’m a little more a fact-based minded in terms of what happened, I really wanted those answers.”

Access to these resources gave Sam a deeper understanding of her culture and the variables around the plight of the Cambodian diaspora, one of many moments that she describes, “shifted my thoughts about what I wanted to do in the community because it became, instead of a cultural, social exploration of my identity…I felt like I needed to take action.”

Connecting at a national and international level

Sam’s transformation into an activist continued to evolve when she began connecting with other like-minded Cambodian American from across the United States through an online platform called Khmer Connection.

This revelation of a community beyond the borders of Washington state expanded her yearning to continue her journey on a national level. In her mid-20s, Sam began to transition from event organizer to more direct activism, and she began work in the arenas of gender equity, healthcare and reproductive rights.

It was her work here that Sam honed her skills in community work, hard skills that she would later bring back to the Cambodian American community in Washington state. Here, she learned how to lobby legislators, phone banking and canvassing. “I think that was really helpful to go into other movements where they had a history and the resources that I learned that exist…it didn’t exist within the [Cambodian American] community in this capacity.”

In 2011, Sam’s continued journey on a national level took her to the doorsteps of the SEARAC, a national advocacy group that focuses on leadership development and building capacity within the Cambodian, Lao, and Vietnamese communities of the United States. Sam participated in SEARAC’s inaugural Leadership and Advocacy Training (LAT) program. In 2013, she became a facilitator for LAT. It was through SEARAC that another “shift” in her journey would occur.

Through the LAT program, Sam made one of the most impactful connections in her journey. She connected with 1LoveMovement, a Philadelphia-based group advocating on behalf of the exiled and deported members of the Cambodian community.

At the time of meeting, Sam was still focused on health care advocacy. “I was there to do health work, but I spent my evenings working with them, learning about where they’re at or where the movement was.”

Sam would go on to work even closer with 1LoveMovement, and in 2016, with collaboration from the Southeast Asian Freedom Network (SEAFN), she joined an ambitious anti-deportation campaign called Right2Return. This coalition radically changed the traditional anti-deportation strategy by directly engaging with government officials in Cambodia.

In the fall of 2016, this coalition travelled to Cambodia and was accompanied by an NBC Asian America crew led by film maker Sahra V. Nguyen, which created a documentary series from the coverage called Deported.

The Right2Return delegation met with a collective of representatives from the Interior Ministry, Foreign Affairs Ministry and the Justice Ministry. At its conclusion, a task force was formed to revisit the repatriation agreement between the United States and Cambodia with regards to deportation between the two countries.

This experience would once again “shift” Sam’s direction in terms of her community work, “It kind of planted a seed for me…this is where the direct need is for my community.”

This experience with SEARAC also gave Sam the platform to see how her skill sets acquired over the years could be adapted to work back home, “connecting with SEARAC is what brought me back and to see that there was a way that this can be connected [to advocacy in Washington state].”

Sam’s appointment into CAPAA marks her first foray into a position directly affecting policy. She acknowledges that this territory of work is very foreign to her, let alone the people she’s used to working alongside in the community. “I think social justice activists often times do not think about going into these types of positions because they’re often working in a capacity where they are protesting, working on the front lines, working with families, going into meetings to be on the other side… it’s [policy makers] often seen as the opposition.”

This latest “switch” occurred when she had an encounter with then Commissioner Darren Pen, and was able to see policy work and being a change maker. “I think when he said he was commissioner, I think that flipped a switch to say there’s Khmer people involved in that.”

As a CAPAA Commissioner, Sam hopes to begin work towards ending deportation, building capacity for marginalized communities and cultivating “deeper thinking, reflection, learning history and making connections” – something she was able to do because of her access into higher education. Lastly, she hopes to continue to “help the younger generation and anyone afterwards [have it] easier for them…to not grapple with identity.”