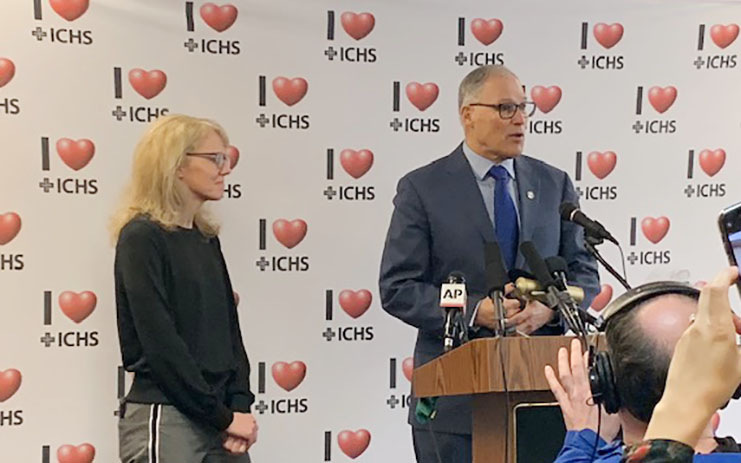 ICHS CEO Teresita Batayola and her leadership team, led Inslee and two state health officials on a brief tour of the medical and dental clinic before sitting down to discuss concerns about health care access and the coronavirus in a private discussion.

Inslee’s tour, scheduled before the recent spate of deaths linked to a Kirkland nursing home, was originally planned to highlight Cascade Care, the nation’s first public option for health insurance.

At a press conference following the meeting, the Governor said he learned from ICHS that its rate of uninsured patients has risen, in part because of federal rules targeting immigrants and refugees. He called the implementation of Cascade Care “timely.”

Inslee, taking note of the increase in anti-Asian bias and xenophobia, remarked that viruses do not distinguish between individuals based on ethnicity. “They do not discriminate,” he said. He encouraged people to continue to patronize local Asian businesses. “If you’re thinking about going to a restaurant, there’s nothing wrong with going to an Asian American restaurant,” he said. “It’s some of the best food in the world.”

Inslee announced that the state has ramped up its capacity to test for the coronavirus to 200 tests per day at the state lab. He said he hoped to talk with federal officials later in the afternoon to urge them to provide greater flexibility in the criteria for testing to allow for more screening and detection. He added that the Maple Lane facility near Rochester has been identified as a possible isolation and quarantine site for coronavirus patients.

The Governor reiterated that those who are ill should not go to work and should avoid contact with others. “Wash your hands,” he said. “Your mother was right then, and she’s right now.” To accentuate that point, Inslee and other state officials avoided shaking hands with ICHS staff and medical personnel. Instead, Inslee cheerfully exchanged elbow bumps.

In wake of concerns about the coronavirus outbreak, Kin On also announced on Tuesday that it will postpone its 35th anniversary celebration gala event to September 20, 2020. Kin On is partnering with ICHS to develop a $20 million facility on Beacon Hill to allow seniors to age in place in their homes.

A statement from Kin On said its decision “is not a response from panic or fear, but out of an overabundance of precaution to ensure the health of our community, staff, partners, and hotel workers. The agency, which operates a nursing home and an adult family home, said it “is dedicated to doing our part to ensure the safety of our community as a whole by helping to reduce any unnecessary risk factors at this point.