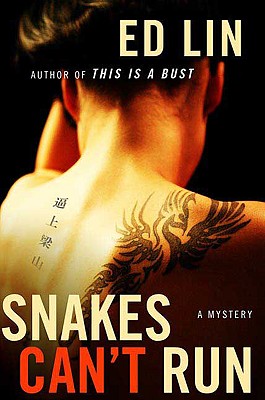 First of all, if you still haven’t read Ed Lin, you gotta get on the ball. I started late. I came across his first book, “Waylaid”, while perusing the shelves of Seattle’s Kinokuniya Bookstore back in 2005. I picked it up because of the title, started to read it, and couldn’t put it down. After several pages I thought to myself, “Hey, this sounds familiar…” And sure enough, there on the inside back cover was a picture of my old college buddy, Ed Lin, who used to tell me disturbing stories about growing up in a motel in Jersey over endless cups of coffee at the Hungarian Café in New York’s Upper Westside.

Yeah, that’s right. I used to kick it with Ed – a critically acclaimed author and the first person to win the Asian American Literary Member’s Choice Award twice – in New York in the late ‘80s. That makes me super cool, and famous by association. But that’s not why you should read him. You should do it because “This is a Bust” and his latest, “Snakes Can’t Run”, are full of witty dialogue and fascinating characters, with a narrator whose clumsy but determined journey unveils universal truths about how flawed we are as human beings, and how resilient.

Both books are about NYPD Officer Robert Chow, the only Chinese American cop working in Chinatown in 1976. Lin has a gift of transporting readers to an entirely different place and time, when music was still good (Chow slips in a tape of Stevie Wonder’s 1973 album, “Innervisions”, while investigating a double homicide in the first chapter of “Snakes Can’t Run”), and when Third World liberation struggles were fiercely fought and palpably felt not just abroad, but within the United States. Both Chow and his partner, Vandyne, are Vietnam vets, and “Snakes Can’t Run” opens in the wake of a bombing just outside NYPD headquarters by Puerto Rican leftist independence group, Fuerzas Armadas de Liberación Nacional (FALN).

Recently, I had a chance to interview the author to learn more about his creative process, his eating habits, and Joey Ramone. Below is an excerpt of what he said.

How has Chow changed since the end of “This Is a Bust”?

Why did you choose ‘70s NY Chinatown as a setting?

EL: 1976 is very interesting to Chinese and the Chinese Diaspora. The heads of the two sides that fought the civil war in the 1930s and 1940s are now dead or dying. Right-wing Nationalists hold sway in communities outside of China itself, even though they lost the civil war. Emerging Communist-aligned groups could possibly come to power in New York’s Chinatown…

Why human trafficking as a subject? How do you feel about the present-day immigration debate?

EL: In my books I want to talk about real problems and issues in the Asian American community, but not necessarily take a position on them. How can I not talk about human trafficking and immigration? How can it not be relevant to what’s going on today? The laws are always skewed against the politically weakest. There’s no way anybody could “sneak” into the U.S. without some infrastructure tacitly approved by people in power. Let’s face it: undocumented workers do jobs Americans don’t want at wages Americans wouldn’t work for. They are the sand that gets thrown onto the icy tracks – they are literally throwing themselves under the train – that allows the engine of the American economy to turn its wheels and move. Oh, and Chinese people built those tracks.

What do your parents think of you becoming a critically acclaimed author?

EL: They think, “Is it too late for him to go to med school?”

“Snakes Can’t Run” deals with factions within the Chinese community, resolving tensions between our parents and second-generation Asian Americans like us, and race relations. Is this informed by personal experience? Care to elaborate?

EL: I think Asian culture has been perverted since the 18th century by colonizers and wars, and has yet to revert to “normalcy.” A lot of first-generation Asian parents don’t respect the arts; don’t want their kids to be artists. Yet what Chinese home doesn’t have paintings? What Taiwanese home doesn’t have a stack of DVDs? The strength of Chinese and Taiwanese culture is the arts.

For the full interview, visit: www.brinkofdawn.wordpress.com