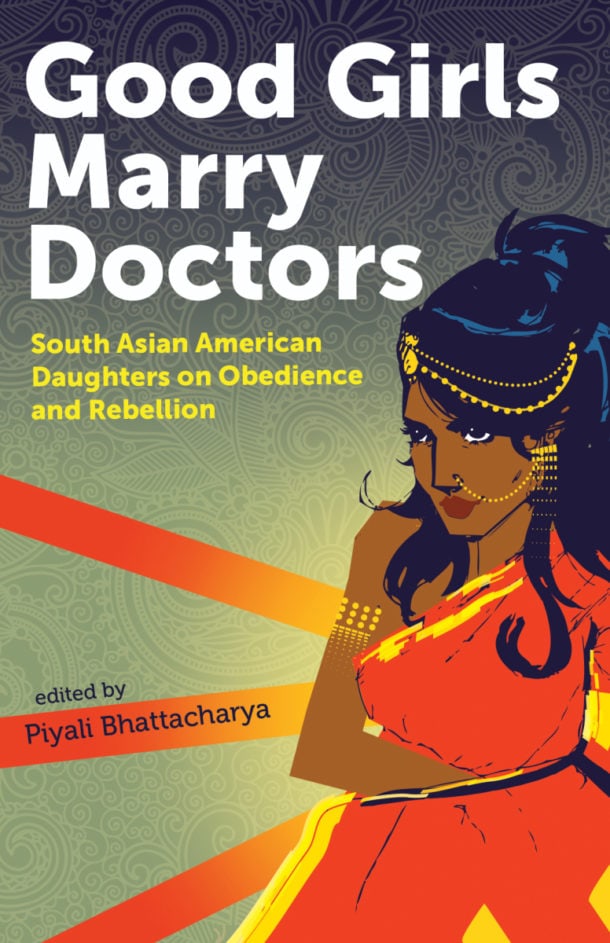 The authors of these essays come from different religious and national backgrounds in South Asia. Triveni Gandhi explores her religious practices through family taboos on meat and alcohol and how she arrives at a personal religious philosophy after re ecting on her own experiences of Indian culture outside her family’s particular practices. Sayantani DasGupta’s “Good Girls Become Doctors” explodes the idea that Indian families force their children into medicine as a profession. The daughter of a South Asian feminist and academic, DasGupta writes about growing up in a household where community-based activism for gender equality was part of the fabric of family life.

When as a college student DasGupta is considering her own professional path, she understands that her father urges her to become a doctor not because he is a patriarch but because he wants his daughter to never be dependent on another for her livelihood. Roksana Badruddoja’s “The Fantasy of a Normative Motherhood” is a powerful essay on the author’s growing realization that the ideals of Bangladeshi American expectations of marriage and motherhood shackled her to a world that furthered capitalistic and heteronormative expectations. She writes candidly of her discovery during a challenging pregnancy that she never felt the biological clock tick, nor really wanted to be a mother. Motherhood isn’t quite what she wants and yet she continues her commitment to raise her now teenaged daughter. She writes, “My story is about being defeated, lost, and struggling while simultaneously celebrating, triumphing, and transforming.” In the “Politics of Being Political,” Piyali Bhattacharya, the editor of the anthology, shares her experiences of navigating parental expectations—familiarity with Indian culture, fluency in the mother tongue, good grades—until she discovered feminism in college. While her parents supported her desire to be a writer, her career as a journalist who wrote on Black Lives Matter and the Indian presence in Kashmir caused conflict with her parents. Yet, when she receives the contract to publish this book, her parents respect her desire to speak her truth.

The above are some examples of the many thought-provoking essays that honestly (and sometimes painfully) explore balancing love and respect for parents and their culture, and finding oneself as a person who may not live up to those expectations. In other words, what are the costs of obedience and disobedience for South Asian daughters? In 1993, Our Feet Walk the Sky resonated deeply with me as a feminist Indian immigrant seeking to understand her experiences; twenty-four years later, Good Girls Marry Doctors speaks to me as the mother of two young women who are seeking their own understanding of what it means to be a South Asian American daughter.

Piyali Bhattacharya speaks with Anu Taranath about this book on May 9 at 7:00 p.m. at Elliott Bay Books.

Nalini Iyer is professor of English and the co-author/co-editor of three books including ‘Roots and Reflections: South Asians in the Pacific Northwest’ (2013) and ‘Revisiting India’s Partition: New Essays in Memory, Culture, and Politics’ (2016).

Angela Chen demystifies the spectrum of asexuality in her debut book, “Ace”