Recently, two promising fiction writers passed through Seattle giving readings. Our IE contributor takes a look at their most recent books. Lan Samantha Chang has a new novel, “All Is Forgotten, Nothing Is Lost”, and Yiyun Li has come out with a new book of short stories, “Gold Boy, Emerald Girl”.

“Gold Boy, Emerald Girl”, a collection of nine short stories by Yiyun Li, and Lan Samantha Chang’s novel, “All Is Forgotten, Nothing Is Lost”, are studies on what relationships there can be between one person and another.

Both Li and Chang are distinguished, young women writers. Li, a native of Beijing and a graduate of the Iowa Writers’ Workshop, now teaches writing at the University of California, Davis. Chang, Chinese American and born in the U.S., is currently the director of the Iowa Writers’ Workshop. Both writers have garnered impressive writing awards in the U.S.

“Kindness,” the first short story in Li’s book, “Gold Boy, Emerald Girl”, began with a self-description. The main character, Moyan, also the narrator of “Kindness”, said of herself, “I am a 41 year-old woman living by myself, in the same one-bedroom flat where I have always lived, in a derelict building on the outskirts of Beijing that is threatened to be demolished by government-backed real estate developers.”

Notice where Moyan lived, a mottled neighborhood, composed in her narrative matter-of-factly. Yet the everyday encounters of Moyan’s life were deceptive. Li’s steady prose moved with more and more details about Moyan’s world – her relationships as a child with her neighbors, the lines forming for rationed food along which she and her father stood managing their cramped household and the pretense of a marriage between her father and her mother. It was a woman neighbor, Professor Shan, who revealed to Moyan that she was an adopted child and it was Shan who opened Moyan’s world by making her the audience of great English novels, which Shan read aloud each day when Moyan visited after school.

Another place Moyan long described was the army camp in the Beijing countryside. At eighteen, Moyan served one year in the People’s Army. Army life with its asceticism grew with the verve and hopes of the girls and women in the platoon. Moyan characterized some of these soldiers with their “kindness” – Nan, the girl soldier and songstress, kind to everyone, and Lieutenant Wei whose strictness was betrayed by wanting to befriend Moyan and to uncover Moyan’s unhappiness at home, as though, to release her from a veil of untruth. When she made an urgent visit home, Moyan observed that “a stranger’s kindness always remembered because a stranger’s kindness, like time itself, heals our wounds in the end.”

The title story of Li’s book, “Gold Boy, Emerald Girl,” brought forward a blind date between a man and a woman. The man’s mother was the Zoology professor of the woman. The mother and professor set up the meeting between her son and her student. The meeting took place at a tea house. It was a laconic date with the man wanting but knowing it was impolite to let it be known his lack of desire to be there, and the woman not knowing what to do to make herself interesting to the man. These three people — the son, the professor and the student — would live in each other’s lives separated from each other by something like a film of grime, like what separated memory and that which we tried to remember. The relationship between the man and the woman culminated in their common love for the mother and professor, a determined, lonely old woman. In this common love, they were confiding to each other the loneliness in their own young chaos and their vigor to move forward from youth to a quietly lived life together. 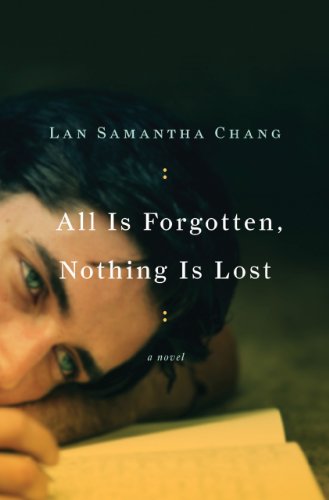 “All Is Forgotten, Nothing Is Lost” by Chang centered on three persons at a graduate poetry writing school in the town of Bonneville, Michigan. Miranda Sturgis, a poet, and two students, Roman Morris and Bernard. Bernard is known simply as “Bernard” without surname. The title, All Is Forgotten, Nothing Is Lost, is the title of a historic poem of French explorers, Louis Joliet and Father Jacques Marquette in the later 1600’s, a poem not much enlightened in Chang’s novel, but which Bernard wrote and re-wrote throughout his literary life within the novel.

We met the three in the first part of the novel, “A Poetic Education.” One day during Miranda’s seminar, she cited Wallace Steven’s poem, “The Idea of Order at Key West,” to her class and Bernard in response quoted the words of Emily Dickinson, “If I read a book and it makes my whole body so cold no fire ever can warm me, I know that is poetry.” These people lived and breathed poetry. Words bounced in between the students’ pettiness and their undeniable talents. Stevens’ poem, read from memory by Miranda, emerged in a sea of emotional lives and with the promise that hard work and inspiration would bring recognition.

Bernard’s question to his friend, Roman, and a question formed in a private friendship with Miranda, “Can poetry be taught?” was not answered in the novel. Bernard, himself, didn’t think so.

As for Roman, during the course of Miranda’s seminar, he held back his poems from class critique. He released them to his classmates and Miranda only during the last class of the semester, when Roman confronted Miranda. Miranda’s revelatory commentary on the beginning of Roman’s writing career was that Roman, at that stage, if ever, wrote as though he had not a soul.

Between Li’s short stories in her collection and Chang’s novel with its ease-of-style, the story “Kindness” stood out. The story of Moyan from girlhood to middle-age showed a contemporary China of urban layers – semi-avoidance of old traditions towards Western culture, an economy still lacking necessities, but most of all, a society melded in the disconnectedness of one person to another, the hopes and distrust of young girls made cadres, and the story-making distance between neighbor to neighbor.

The stories in Gold Boy, Emerald Girl woven together present people and worlds more vital and substantial, and a culture thick and seasoned, more so than the finely-wrought world of the characters in All Is Lost, Nothing Is Forgotten, who were spent in the rarefied logic of art that lay beneath their task of poetry writing.

6 children’s books explore courage, imagination, and the secrets of the universe

Colder Than Ice, Hotter Than A Flying Bullet