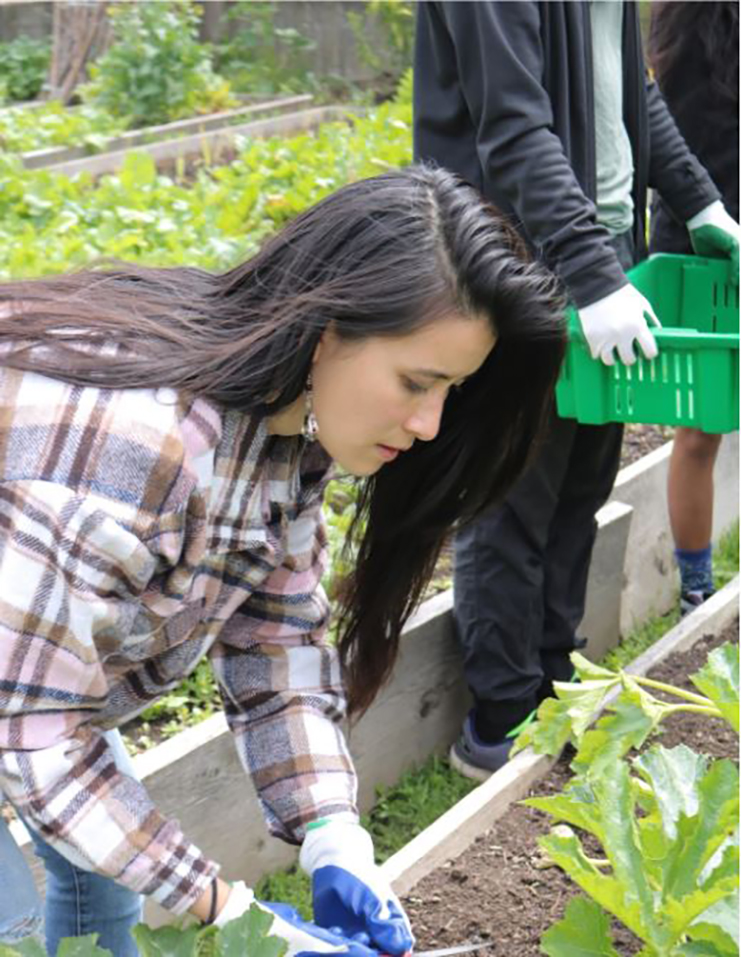 Dominica Zhu is the founder of Global Wisdom Collective (GWC), an organization that supports indigenous communities in preserving the wisdom of their people for generations to come. GWC supports programs and initiatives around intergenerational knowledge sharing, preservation, and protection of wisdom from the indigenous people in the global community.

In the Seattle area, GWC recently collaborated with the Khmer community to hold an intergenerational program named “Khmer Friendship Garden” for young Khmer youth to connect with Khmer elders and record their traditional knowledge. The emphasis of the program is to have the youth pass on indigenous elder knowledge for the next generation. “It’s a two way street,” Zhu said. “The whole structure of the programming that we create, it creates the container for the relationship to be built so that the elders can feel like somebody appreciates what they accumulated for their whole life, and the youth can be part of safeguarding this knowledge.

With roots in the Chinese Dai ethnic minority community, Zhu has lived in New Jersey most of her life. Her mother Dr. Wei Na Yu, a Traditional Chinese medicine (TCM) doctor, had a great impact on Zhu’s worldview.

“I didn’t realize how much of a gift I was being given until I got older,” Zhu said. “But I really absorbed everything she said. It really influenced the way I saw the world. ”Unlike most TCM practitioners in the U.S., Zhu’s mother studied TCM in China without any western influence, while she was in her early 20s. Later when she moved to New York, she established her own clinic, the Yu Center of Lifestyle Excellence. According to the clinic’s record, she has treated over 50,000 patients in the U.S. over three decades.

Zhu was constantly at her mother’s clinic when she was young, and her mother instilled TCM values in her from a young age. This exposure also has allowed her to be more aware of the impact of westernization on indigenous knowledge, including the barriers when converting the knowledge to English, the division of system, and the educational approach when passing on this indigenous knowledge in Western culture. Despite the recognition of TCM in the medical field currently, Zhu’s mother’s clinic suffered from discrimination in the 1980s. Zhu said there was a man who walked into the clinic and said he would give her mother $20 for one visit because “no one would come in here anyways.” It was an example, Zhu said, of how her community’s indigenous knowledge was not given the knowledge and respect it deserved. She felt that as a member of the diaspora, she had a responsibility to protect her ancestors’ indigenous lifeways.

In 2015, Zhu collaborated with a local organization in Sri Lanka and visited an agricultural village where she got to listen to stories from a doctor who held the knowledge of curing venomous snake bites. While there were a number of young people who came to the doc-tor and claimed that they would like to learn from him, they never actually stayed in the village, instead tempted to move to bigger cities. By the time Zhu visited this doctor, he had been diagnosed with cataracts and was losing his vision. Zhu decided to be his student and record his knowledge. From this experience, she was able to spend what she felt was invaluable time with him and record his knowledge in the local language, so that it could be kept within the community. This unique experience made Zhu realize that there are many indigenous people in the world, like her mother, whose knowledge would be lost if it was not properly recorded. Zhu also points out that while indigenous communities make up less than 5% of the world’s population, they help protect 80% of the Earth’s biodiversity in the forests, deserts, grasslands, and marine environments in which they have lived for centuries.

“It’s obvious that they [indigenous people] know how to take care of the earth,” Zhu said. “So why are we taking that for granted? ”The last impetus for Zhu deciding to start the Global Wisdom Collective washer near-death experience in 2019. She had a drowning accident in the ocean and she was resuscitated. The experience helped understand that time is limited. The urgency of preserving the beauty of nature and indigenous knowledge was a big push for Zhu to establish GWC in 2020. The work she and her organization do sometimes feels like a race against the clock. “Because with every three months, six months, a year that passes, another elder dies, and that’s like an entire encyclopedia library that you’re never gonna get back,” Zhu said.

Within two years of GWC’s foundation, they have created a community-led project named “Revitalized the Roots initiative” in Kenya, which aimed to protect the indigenous knowledge of Endorois people, alongside the Endorois youth and elders. Zhu said they hope todo more programs like this and equip other indigenous youth to record and protect the indigenous knowledge of their elders. Instead of spreading these indigenous knowledge to the public, Zhu said GWC is about supporting the privacy and integrity of the traditional knowledge systems and supporting other indigenous communities to record these intergenerational dialogues to stay in the com-munity, in the native language. “I often think about that — when an animal goes extinct, it doesn’t make a sound. It’s just done. And then people just move on and forget that happened. This happens to cultures and people too,” Zhu said. She hopes these efforts can help humankind remember, and to protect these precious knowledge systems for many generations to come.